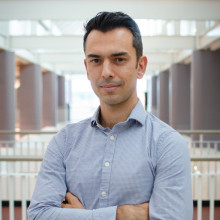 After receiving his BS in Computer Science from Rensselaer, Brian began his career as a game developer, working on franchises such as Guitar Hero and Spiderman. Despite the perks of the industry, he was quickly drawn into the world of research, studying Bioinformatics at Georgia Tech and working for a government contractor. He is now pursuing a doctorate to branch out further into Computer Science, with interests including Natural Language Processing and Human-Computer Interaction. He is supported by the NIH, where he has opportunities to collaborate with leading biological and medical researchers.