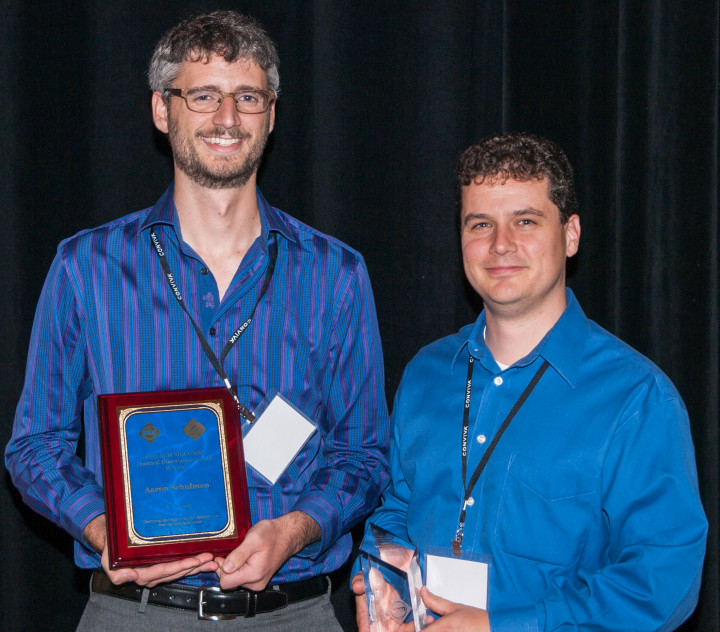 On August 19th, 2014, during the ACM SIGCOMM meeting in Chicago, two members of the Department of Computer Science received awards for their contributions to the field of Networking and Data Communication.

Professor Neil Spring was awarded the ACM SIGCOMM Test of Time Award for his paper with Ratul Mahajan and David Wetherall on "Measuing ISP Topologies with Rocketfuel."  His paper, published in 2004, has been recognized for its ongoing, significant contribution to research conducted in this field.

During the same ceremony, Aaron Schulman (Ph.D. ’13) accepted the SIGCOMM Doctoral Dissertation Award for Outstanding Ph.D. Thesis in Computer Networking and Data Communication for his dissertation, "Observing and Improving the Reliability of Internet Last-mile Links."

This was a particularly thrilling moment for the Computer Science Department at the University of Maryland as Professor Spring was Schulman’s Ph.D. advisor.

When asked what it meant to receive the Test of Time award at the same time that his student received the dissertation award, Spring responded first about Schulman’s accomplishments: “I’m overjoyed. I’m very proud of Aaron, and grateful to the community at Maryland that encouraged him: Dave Levin and Bobby Bhattacharjee in particular." About his own award, he responded, “The test of time award reflects how Rocketfuel data are still used and the paper is still read; I’m delighted by the recognition.”

Schulman, who is now a post-doc at Stanford University, said, “Both awards, the one that I am pleased to have received, as well as the award that Neil has received, are a testament to Neil’s dedication to his research and to his students. Neil embodies the ideal academic.”

The ACM SIGCOMM Test of Time Award recognizes papers published 10 to 12 years in the past in Computer Communication Review or any SIGCOMM sponsored or co-sponsored conference that is deemed to be an outstanding paper whose contents are still a vibrant and useful contribution today. http://www.sigcomm.org/.