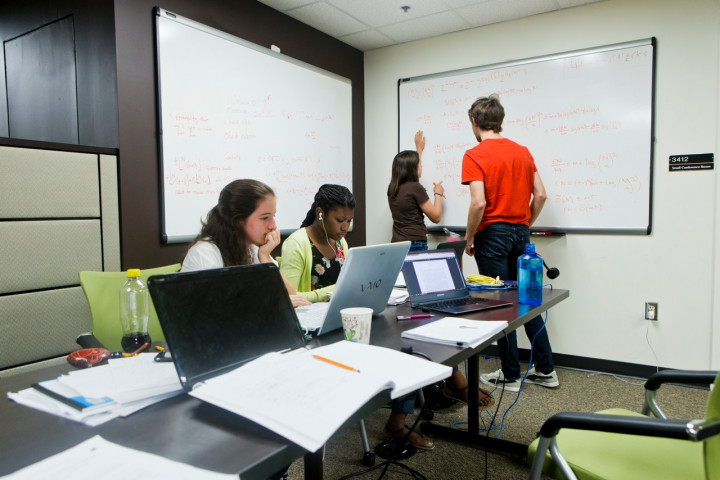 The University of Maryland will receive $30,000 per year for three years to support efforts to increase the number of women and students of color who major in computer science. UMD is one of 15 universities that will be supported by the Building Recruiting And Inclusion for Diversity (BRAID) initiative led by the Anita Borg Institute and Harvey Mudd College. The initiative—which is funded by Facebook, Google, Intel and Microsoft—was announced on Sept. 24, 2014 by Hillary Clinton as part of a Clinton Global Initiative commitment that supports programs for women and girls.

Lack of diversity in science, technology, engineering and mathematics fields is a national problem. In the U.S. in 2001, 28 percent of bachelor’s degrees awarded in computer science went to women and 30 percent to students of color, according to the National Science Foundation. By 2011, those numbers had dropped to about 18 percent for women and 27 percent for students of color. The percentage of degrees awarded by research universities to these underrepresented populations is even lower.

“Undergraduate computer science departments across the country are interested in attracting women and underrepresented minorities to their programs,” said Telle Whitney, president and CEO of the Anita Borg Institute. “Leveraging the experiences of successful programs like those at Harvey Mudd College provides an attractive path to redesigning their programs. BRAID is designed to jump start their efforts and document the results to identify best practices that consistently yield results.”

"We are extremely excited to receive this funding, which we hope will enhance our efforts to improve recruitment and retention of undergraduate computer science students by providing them with valuable experiences,” said Samir Khuller, chair of the UMD Department of Computer Science. “One experience this funding will support is sending many majors and non-majors to attend the annual Grace Hopper Celebration of Women in Computing, which we hope will lead more students to consider majoring in computer science.”

Last year, UMD launched the Maryland Center for Women in Computing, which aims to bring extraordinary women to computing fields, support women studying computing at UMD, and conduct research to determine which interventions have the largest impact. To do this, the center operates programs to reach K-12 teachers and students and supports initiatives on campus for female graduate and undergraduate students studying in all areas of computing.

“The Maryland Center for Women in Computing has a very important mission—to offer programs designed to increase the number of students from currently underrepresented groups who choose to enter computing fields and programs to help them remain successful and excited about the field. By educating women and other underrepresented populations about opportunities in computing, we are breaking down perceived gender and racial stereotypes,” said Jandelyn Plane, senior lecturer in the UMD Department of Computer Science and director of the Maryland Center for Women in Computing.

The BRAID initiative will allow the center to expand its involvement in after-school programs for middle and high school students. The center’s middle school programs are designed to interest students through hands-on activities. At the high school level, one program prepares students for the CyberPatriot competition, which focuses on cybersecurity and the defense of our nation’s digital infrastructure. These outreach programs provide an opportunity for female undergraduate students in computing fields to teach younger students about computing, while sharing their own excitement about and interest in computing.

The university will also work to increase the number of student members in the Association of Women in Computing—a group that creates a sense of community between undergraduate and graduate students. The numbers of social activities and career-related seminars the group offers each year are also expected to increase.

In addition, UMD will implement a number of approaches that have demonstrated success at other institutions, including Harvey Mudd. One approach will be to modify introductory computer science courses to make them more engaging and less intimidating to students from underrepresented groups.

“We also want to create courses that are attractive for non-majors, including one that involves some programming, but emphasizes data analysis and what electronic tools can do to help you solve problems in your discipline,” said Khuller. “We hope this type of course will encourage non-majors to consider double majoring in computer science.”

Over the course of the three-year award period, the Department of Computer Science at UMD and the other 14 universities that received funding will conduct research to study how effective their approaches are and to develop a set of best practices for further expansion.