Endowed professorship in virtual reality created with private and state support
May 09, 2018 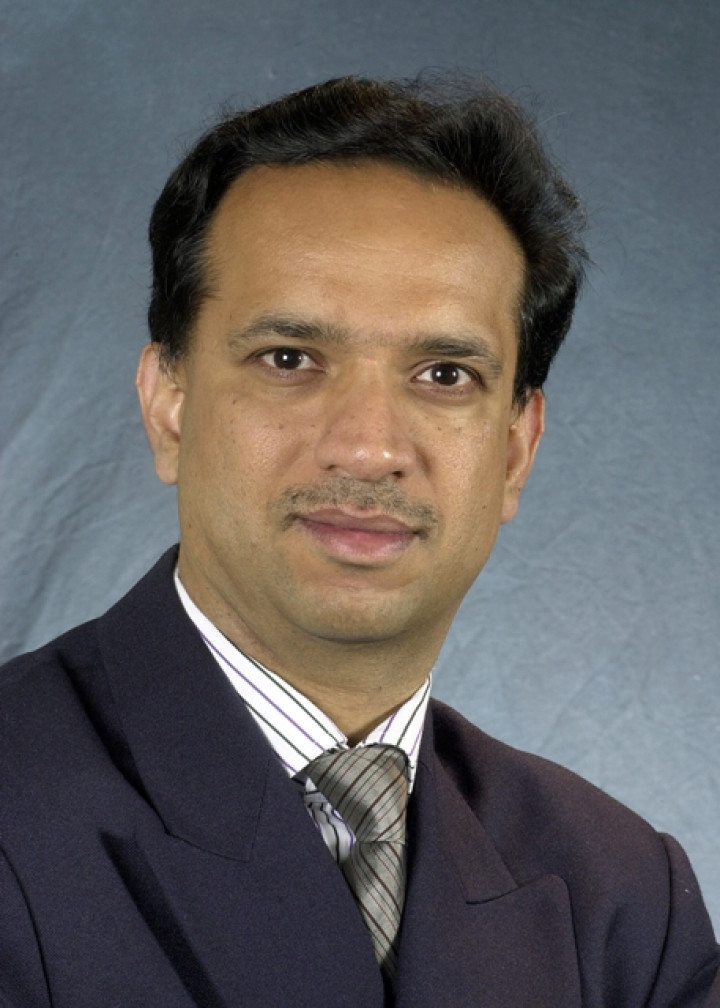 “I am truly honored to join the University of Maryland with appointments in two top-ranked departments. With very strong research groups in virtual reality, computer vision and graphics, and robotics, the University of Maryland is regarded as the world leader in these areas,” Manocha said. “I am also looking forward to the new Brendan Iribe Center for Computer Science and Innovation opening later this year. It is going to offer unprecedented opportunities and new world-class laboratories to develop the next generation of technologies.”

In 2015, Elizabeth Iribe established the endowed professorship to honor her brother, Paul Chrisman Iribe. Elizabeth’s donation received an equal match from the state’s Maryland E-Nnovation Initiative Fund (MEIF), which aims to spur private donations to universities for applied research in scientific and technical fields by matching such donations.

“With my gift, I wanted to help the University of Maryland become a leader in virtual reality, an emerging field that has become a big part of my life through my son, Brendan,” Elizabeth Iribe said. Brendan Iribe, a UMD alumnus, co-founded the virtual reality company Oculus.

“I have had close ties with Oculus for almost five years, and I feel that Oculus reinvigorated the field of virtual reality and led the technology’s widespread adoption,” Manocha said. “My group has been working closely with the Oculus Research audio team, which is led by my former Ph.D. student, Ravish Mehra. With this generous professorship, my group will be able to pursue new research directions.”

Manocha’s research focuses on geometric and scientific algorithms with applications to computer graphics, robotics and virtual reality. His research group also developed software packages for physically based modeling, computer-aided design and scientific computing, which have been downloaded by more than 200,000 users worldwide and licensed to more than 55 corporations, including Fortune 500 companies. He is also named as an inventor on nine patents, several of which have been licensed to industry.

“Dinesh is a very accomplished computer scientist and we are proud to have him join the faculty at the University of Maryland,” said Amitabh Varshney, dean of the university’s College of Computer, Mathematical, and Natural Sciences (CMNS). “His connections with industry and his expertise in computer graphics, robotics and virtual reality will help us further expand the university's leadership in these areas.”

Manocha joined UMD from the University of North Carolina at Chapel Hill where he was the Phi Delta Theta/Matthew Mason Distinguished Professor in the Department of Computer Science. As a member of the UNC faculty since 1992, he published more than 480 conference and journal papers and received 16 best paper or test-of-time awards. Manocha’s work is well cited in the computer graphics and robotics literature, with over 34,000 citations according to Google Scholar.

He also supervised more than 65 master’s and doctoral students. Many of Manocha’s 35 Ph.D. advisees are professors at top universities and group leaders in industry.

Along with two of his former Ph.D. students and Professor Ming Lin, who is now the Elizabeth Stevinson Iribe Chair of Computer Science at UMD, Manocha co-founded the 3D audio startup Impulsonic, which was acquired by Valve Software in 2016. Impulsonic’s product provided the realistic sounds required for a user to feel truly immersed in a virtual world and is available as part of Steam Audio SDK. The sound technologies developed by the researchers have also been used to evaluate the acoustic effects of architectural buildings and to model noise in indoor and outdoor environments.

For another research project, Manocha uses virtual reality and simulation technologies to predict the movement of pedestrians and crowds. These technologies can be used to improve crowd safety and prevent disasters like the 2015 Hajj crowd disaster in Mecca, Saudi Arabia, where more than 2,200 pilgrims died. The multi-agent navigation technologies developed by Manocha’s group have also been integrated into most computer gaming engines.

Working with Boeing, Manocha’s research group modeled passenger behavior during the loading, unloading and evacuation of a commercial aircraft. This type of simulation allows the airlines to experiment with different boarding orders, seating arrangements and overhead layouts to reduce loading and unloading times—and ultimately demonstrate that the aircraft could be safely evacuated in less than 90 seconds, as required by U.S. federal law. This work, which has also been used to analyze crowd videos for surveillance and to estimate crowd sizes, garnered media attention during President Trump’s inauguration.

More recently, Manocha and his students began developing new technologies to simulate the movement and behavior of autonomous vehicles in challenging traffic conditions, such as Beijing or Washington, D.C. The major goal of this work is to predict the navigation and safety capabilities of autonomous cars in crowded scenarios that contain other vehicles, pedestrians and bicycles. Manocha’s group has been collaborating on this project with Intel Corp. and Baidu Inc.

Manocha is a fellow of the Association for Computing Machinery (ACM), IEEE, the American Association for the Advancement of Science and the Association for the Advancement of Artificial Intelligence. He has received a National Science Foundation Faculty Early Career Development (CAREER) Award, an Office of Naval Research Young Investigator Award, a Sloan Research Fellowship and an IBM Fellowship. In addition to having served as a member of the ACM SIGGRAPH executive committee, Manocha has been a program or general chair of more than 20 leading conferences in computer graphics, robotics, virtual reality and geometric computing.

As the Department of Computer Science searches for candidates to fill the Capital One Professorships, construction continues on the Brendan Iribe Center for Computer Science and Innovation. A cutting-edge research, education and entrepreneurship facility for computer science at UMD, the facility is expected to open in late 2018. The new building became a reality thanks to a $31 million gift from Brendan Iribe.