Computer Science majors Hassan Syyid and Sandeep Ramesh are developing an app to find the safest route for the commuters
October 21, 2019 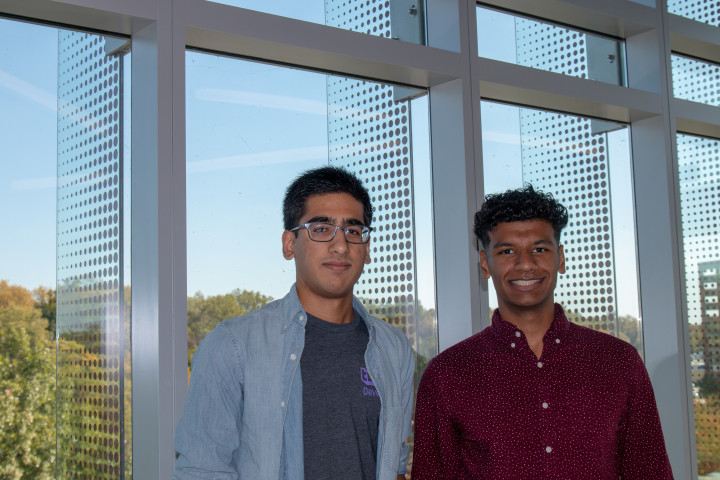 For people who live in crime-ridden neighborhoods, walking to work, school or even the grocery store safely can be stressful, if not outright dangerous. Two UMD computer science majors want to put an angel on their shoulders—or in their phones.

Freshmen Hassan Syyid and Sandeep Ramesh are developing Path Angel, an app to help commuters find the safest route to their destination. It took triple honors last month at Cornell University’s Big Red Hacks: Hack to Save Your Community!

The duo was inspired to create their app while walking around the Cornell campus and trying to find a shady path to escape the scorching heat. Syyid realized that it would make more sense for a person to seek out a safe rather than cool walkway. He and Ramesh thought about how residents of high-crime areas may not be able to afford cars or other reliable transportation, and fear being approached by gang members as they walk to their destinations.

“Students who have to cross gang lines to go to school often eventually get recruited by these gangs,” said Syyid.

Syyid and Ramesh met less than two months ago in the Honors College’s Entrepreneurship & Innovation Program and quickly realized that they shared an interest in programming and developing products and teamed up for the September hackathon.

Syyid has since also won the grand prize of $1,000 in the TwitchCon hackathon in San Diego, where he developed Ok Gamers, a Twitch extension that adds a visual element for streamers to see what their viewers want in real time, rather than trying to guess based on a fast-movingchat. “Using speech recognition, Ok Gamers automatically detects when a streamer asks their viewers a question. All they have to say is, ‘Ok gamers,’” he said. Ok Gamers then reads the chat, tallies viewers’ responses and shows them in a real-time pie chart so streamers can get the full picture of what their viewers want.

Syyid has been actively programming and making mods for Minecraft since high school while Sandeep developed his interest in computer science during AP classes in high school.

“Getting involved outside of the classroom and being able to take what you have learned from the textbooks and lectures and developing products is really important,” said Ramesh.

Both have other entrepreneurial ambitions: Syyid is involved in developing his company hotglue, a lightweight platform that helps software companies get their customer's data easily, while Ramesh is focused on data science and quantitative analytics for financial markets.

The pathangel pair, meanwhile, plans to expand the data sets to cover more cities and provide a real-time route option analysis for joggers. They also plan to work on providing low-intensity choices for people who find it difficult to walk up hills.
Plus, they’re still figuring out how to identify those shady campus paths.