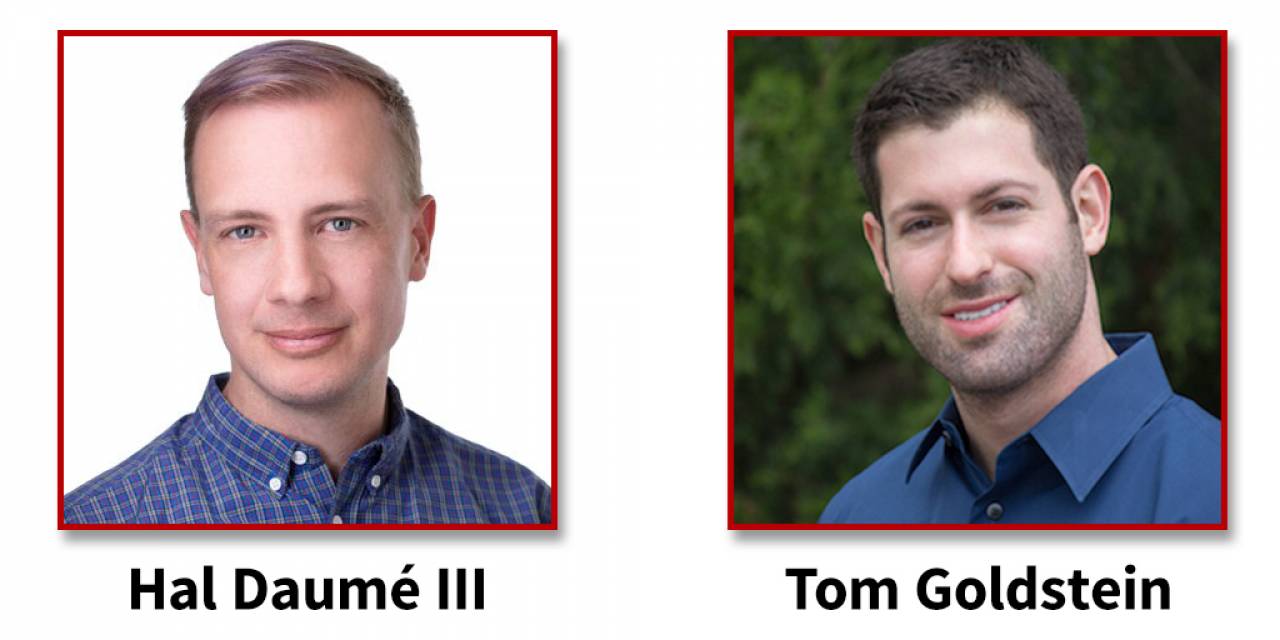 Professor Hal Daumé III and Associate Professor Tom Goldstein have been unanimously selected as the inaugural Pier Giorgio Perotto Endowed Professors by a committee, consisting of distinguished faculty members within and outside of the Department of Computer Science.

Daumé’s research focuses on developing efficient machine learning algorithms to build natural language processing systems based on interactions with people. This involves designing techniques that can actively interact with human experts to learn to mimic their behavior, as well as methods that can actively request information from people, or to ask clarifying questions and to improve their own operation.  In addition to being a full professor of Computer Science, he also holds joint appointments in UMIACS and Language Science Center.  Before joining the University of Maryland, he was previously an assistant professor in the School of Computing at the University of Utah.  His extensive research has been recognized by several best paper awards in his areas of research.

Daumé is very interested in building learning algorithms for highly complex language tasks, where the algorithm can learn from many different types of feedback simultaneously, and which can actively seek out information it needs. Some initial work in this space has already published [ICML'18, ICML'19, EMNLP'19, NeurIPS'19] and is under review [ICLR'20], heading toward algorithms that can know when they don't understand things, be able to ask experts for help in those cases, and to implicitly trade-off the costs of different types of feedback that they can ask an expert for.

Daumé also studies how machine-learning systems that use language can be aware of the possible harms that language can produce, such as reinforcing stereotypes, reifying social groups and, excluding groups of people from the use of technology, etc. He aims to develop machine-learning algorithms that take into account the societal context in which they will be applied. Daumé’s recent work explores what algorithm developers need to encourage fairness in their methods [CHI'19], as well as data documentation proposals [CACM, under review] that have already seen adoption both in academia and industry.

Goldstein’s research focuses on optimization and distributed computing, targeting applications in machine learning, computer vision, and signal processing.  Before joining the faculty at UMD, Goldstein completed his PhD in Mathematics at UCLA, and was a research scientist at Rice University and Stanford University. In addition to being an associate professor of Computer Science, he also holds joint appointments in UMIACS and The Department of Electrical & Computer Engineering.  Goldstein has received several prestigious awards for his work, including a Sloan Research Fellowship, the DiPrima Prize from the Society for Industrial and Applied Mathematics, and a Young Faculty Award from the Defense Advanced Research Projects Agency.

Goldstein aims to build our intuitive understanding of artificial neural networks.  These powerful models often exhibit human-level performance on complicated tasks, but their ability to learn quickly and perform well is not understood. Goldstein proposed a new way to visualize the inner workings of artificial neural networks, and used it to study how the design of neural networks impacts the way they learn.  This work appeared at NeurIPS’18 (https://arxiv.org/abs/1712.09913). He also used visualization methods to explore why neural networks generalize to new data that they have never seen (https://arxiv.org/abs/1906.03291).

Much of Goldstein’s current research efforts are directed towards the security and reliability of intelligent systems.  Goldstein studies ways that bad actors can “hack” Artificial Intelligence systems, and ways to harden intelligent systems against attacks.  A notable example is his study of new kinds of attacks on copyright detection and content control systems, like YouTube's Content ID.

Goldstein also proposed an innovative approach to solve "phase retrieval problems," which are an important part of scientific imaging systems, like X-ray crystallography.  The new method, called PhaseMax, showed that phase retrieval problems could be solved with lower complexity than was previously thought possible (https://arxiv.org/abs/1610.07531). This work was published in the April 2018 issue of the IEEE Transactions on Information Theory.

The Pier Giorgio Perotto Professorship has been established for the development and retention of junior and mid-career faculty, with a recent generous gift from the Volpi Family Foundation and matching funds from the Maryland E-Nnovation Initiative Fund (MEIF). The Maryland E-Nnovation Initiative (MEI), is a state program created to encourage basic and applied research in scientific and technical fields at the colleges and universities.

Here is the press release about the matching funds from the state.