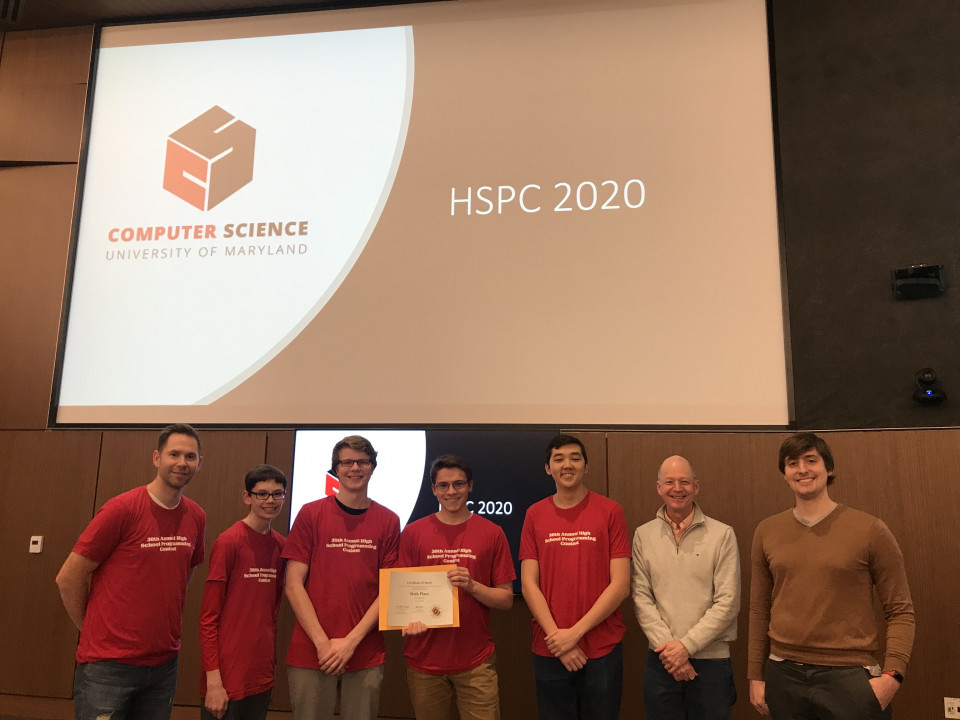 On February 29th, the department hosted the 30th Annual UMD High School Programming Competition (HSPC), which brought together high school students from a diverse set of schools around the DC Metro area.

30 teams of talented High School students  gathered for a three-hour competition to compete ( in teams of four) and to demonstrate their programming skills and problem solving abilities.

Problems involved creative combinations of the application of core computer science and mathematics concepts such as graph theory, dynamic programming, recursion, combinatorics, and probability.  This year’s problems, along with the skeleton code given to students as well as the judges’ solutions, can be found here.

This year, local Maryland high school Montgomery Blair narrowly edged out Fairfax County, Virginia’s, leading high school Thomas Jefferson by a few points to win.  Both teams solved all eight problems, a feat in and of itself, but Blair solved them faster and with one fewer incorrect initial submission.

The event was led by Assistant Professor John Dickerson whose association with the contest goes back to 2003 and 2004, when he competed in HSPC as a high school contestant hailing from Sherwood High School.

“The annual UMD high school programming competition is a meaningful experience for young students interested in computer science.  Not only do they get to test their mettle as small teams against other small teams, but they also get to meet like-minded students from a diverse set of schools around the DC metro area”, said Professor John Dickerson

The Gannon Prize is awarded in memory of John Gannon, former chair of the Computer Science department and an enthusiastic supporter of the UMD High School Programming Contest.

Professor Lin expressed her sincere gratitude to Nancy Garrison, wife of Prof. John D. Gannon, for her continued support in Prof. Gannon’s honor. “Gannon Scholarships have enabled many young, aspiring students to pursue their careers and dream jobs” she said.