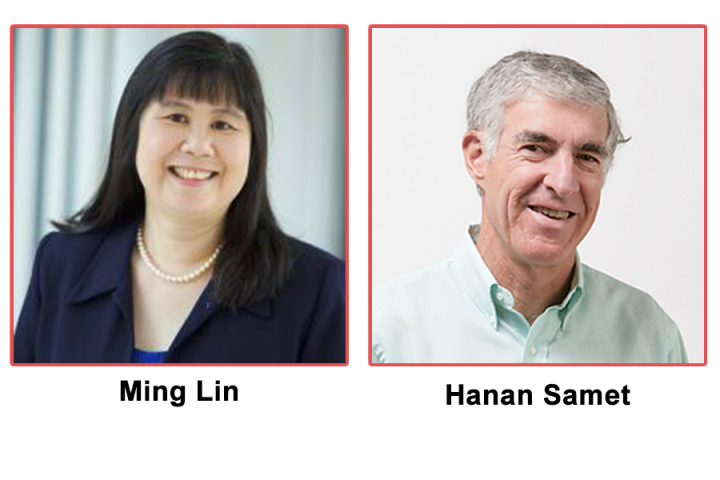 Distinguished University Professors Ming Lin and Hanan Samet  recently received the distinguished career in computer science award by the Washington Academy of Sciences. A lifetime achievement award which acknowledges the significant impact of their work in the field of computer science.

This award program started in 1940, to encourage the advancement of science and "to conduct, endow, or assist investigation in any department of science."

An expert in virtual reality, Lin’s research focuses on computational robotics, haptics, physically-based modeling, virtual reality, sound rendering, and geometric computing.  She has been a fellow of ACM,  IEEE, and Eurographics and was recently named to the 2020 Association for Computing Machinery SIGGRAPH Academy in recognition of her contributions in collision detection, physics simulation, natural phenomena, crowd animation, haptics, and sound rendering.

She has (co-)authored more than 300 refereed publications in these areas and co-edited/authored four books.  She also has  served on hundreds of program committees of leading conferences, co-chaired dozens of international conferences and workshops, an editor-in-chief emerita of the IEEE Transactions on Visualization and Computer Graphics, and an editorial board member of several journals.

She co-leads a major research group GAMMA with more than 25 students on geometric and simulation algorithms with applications to Computer Graphics, Robotics, and Virtual Environments.

Many of Lin’s research findings have been patented and licensed by more than 50 companies world wide.

A pioneer in research on quadtrees and other multidimensional spatial data structures for sorting spatial information, Samet’s research interests include spatial databases, data structures, geographic information systems, image databases, computer vision and more.  He has profoundly influenced the theory and application of these areas of research and his impact can be seen in many real-world applications including Google Earth, the world’s most widely used graphics application

A fellow of  ACM, IEEE, AAAS, IAPR and UCGIS as well as being elected to the ACM SIGGRAPH Academy, Samet and his students recently developed NewsStand CoronaViz a web application that runs on desktops and allows users to explore the geographic spread in discussions about the virus through analysis of keyword prevalence in geotagged news articles and tweets in relation to the real spread of the virus as measured by confirmed case numbers and deaths reported by the appropriate authorities.

Samet  has been the founding chair of ACM SIGSPATIAL, and founding editor-in-chief of ACM Transactions on Spatial Algorithms and systems. He is also the recipient of the 2011 ACM Paris Kanellakis Theory and Practice  Award.

Samet has (co-) authored over 400 research papers and three books. His books are widely cited and his most recent book titled "Foundations of Multidimensional and Metric Data Structures," published by Morgan-Kaufmann, an imprint of Elsevier, was an award winner in the 2006 best book in Computer and Information Science competition of the Professional and Scholarly Publishers (PSP) Group of the American Publishers Association (AAP).

In addition to being the professors of computer science, both Lin and Samet hold joint appointments in the University of Maryland Institute for Advanced Computer Studies.

The award ceremony which normally takes place in May has been rescheduled due to the COVID pandemic.