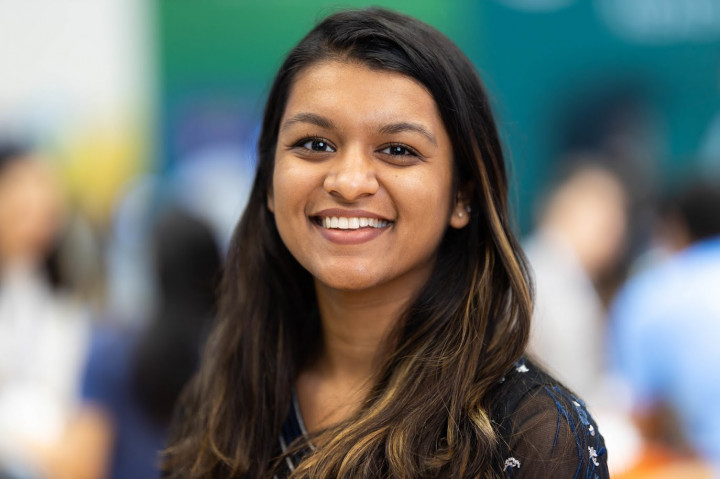 Whether it was middle school robotics club or high school computer classes, Gesna Aggarwal was used to being one of the only girls in the room. But during her freshman year at the University of Maryland, the computer science major stepped into Reckord Armory and was suddenly surrounded by a sea of more than 800 girls, women and nonbinary computer and technology enthusiasts. She had found Technica, UMD’s student-run hackathon.

“It was empowering to see that sort of representation,” said Aggarwal, a senior who also participates in the QUEST Honors Program and is pursuing a minor in general business. “It was just so inspiring to see so many female and non-binary people in one space focusing on technology and uplifting each other.”

That was 2017. It was Aggarwal’s first experience with Technica, the largest all-women and nonbinary hackathon in the world. Although Aggarwal had been interested in technology since learning to program Lego robots in middle school, she had never attended a hackathon. During Technica, she and a team of friends developed an online game in which users answer questions to navigate a series of obstacles to help a girl in the developing world get to school. Their project won Bloomberg’s best education diversity and inclusion hack at the event.

The project supported Technica’s message of female empowerment and aligned with a cause close to Aggarwal’s heart. The game she and her team developed was inspired by the mission of Girl Up, a United Nations Foundation campaign to advance adolescent girls’ skills, rights and opportunities to become leaders. Aggarwal was actively involved with Girl Up in high school and made it her mission to help the UMD chapter grow when she arrived on campus.

“Girl Up's messages of empowerment, gender equality and education are really important to me,” Aggarwal said.

Even after attending Technica, she hesitated to go to other hackathons—most of which are dominated by males—but the young women she met at Technica gave her the boost she needed.

“The idea of going to another hackathon was still intimidating, because it’s unfamiliar territory,” she recalled. “But Technica is such a supportive community, one of the organizers I met encouraged me to go to other hackathons, and it turned out to be really fun.”

Aggarwal next went to HackRU at Rutgers University, where her team won best sci-fi hack, JPMorgan Chase’s best social good hack and Capital One’s best financial hack. They created ALFEKA, a plush alpaca modified with an Arduino, servos and LED lights to interact with children and teach them financial literacy by making it fun to deposit money, create goals and check their balance.

“HackRU was a great weekend,” Aggarwal said. “I learned so much, and we even brought our alpaca back to Technica 2018 to showcase it as a fun project.”

By then, Aggarwal had been drawn into the Technica community and volunteered to serve on the sponsorship team. She loved being part of an organization that created a space where girls and non-binary individuals saw that they belonged in technology and could explore their passions. During her sophomore and junior years, she and the Technica sponsorship team secured the support of donors for the event and managed a budget of $230,000.

Now, as a senior, Aggarwal serves as the co-executive director of this year’s event, which will be held on October 24-25, 2020. Because COVID-19 turned this year’s event into a virtual hackathon, she and her team had to reinvent many of the program’s offerings.

“We worked really hard to recreate the magic of Technica,” she said. “We’re having a lot of the quintessential things about a hackathon like the sponsorship fair, meetings with mentors, watercooler chats where hackers can interchange ideas, and all of the workshops. All of those things will still be part of Technica this year, they’ll just look a little different.”

Aggarwal also hinted that there will be some special, platform-specific offerings to help keep participants engaged. She was quick to point out that one silver lining to an all-virtual hackathon is that participation will not be restricted to participants from the nearby region this year.

“Now you can be anywhere in the U.S. or Canada and come to Technica,” she said.

And the online format hasn’t seemed to hinder the enthusiasm of participants who have registered in record-high numbers. More than 1,000 people have signed up to attend.

Aggarwal’s positivity and ability to find the silver lining have helped her adjust to a year turned upside down by COVID-19. When the pandemic forced her summer internship at Microsoft to morph from an in-person experience in Redmond, Washington, to a virtual job from her parents’ home in Ellicott City, Maryland, she discovered the benefits of networking online.

“While you may meet fewer people in a virtual internship, the connections you make are more well-thought-out and they last a little bit longer,” she mused. “And you have a very clear and easy way to follow up with them.”

As she contemplates life after college, Aggarwal wants to start her career in a corporate setting at a large technology company. And her experiences at UMD have exposed her to a variety of areas in computer science.

Aggarwal participated in the First-Year Innovation and Research Experience (FIRE) Program where she learned to use the programing language R to develop a machine learning model for groundwater extraction rates in the Midwest and presented her research at the American Geophysical Union’s fall meeting. Through the QUEST program, Aggarwal initiated an effort to improve processes and move the computer platform for a tutoring program that helps over 1,000 computing students each year under the Iribe Initiative for Inclusion and Diversity in Computing. During the summer between her junior and senior years, she worked as a software engineering intern at JPMorgan Chase, where she developed a proof of concept for an application programming interface.

“I find a lot of areas fascinating,” she said. “Artificial intelligence. Computer vision. I need to work on gaining technology skills in different areas and figure out what I’m really passionate about.”

Whatever direction she goes, Aggarwal is sure to bring a wealth of experience to the table, and the company she works for will be lucky to have her.