The student organization supports members in their learning and professional development.
December 05, 2020 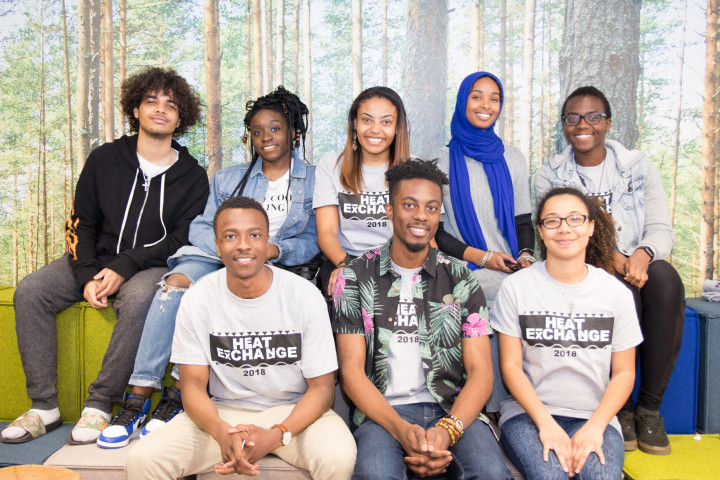 Edward Mancho (B.S. ’19, computer science) noticed something about his undergraduate computer science classes—the more classes he took, the fewer Black faces he saw. When one of his instructors, Senior Lecturer Nelson Padua-Perez, mentioned how there were few diversity organizations within UMD’s Department of Computer Science, Mancho was inspired to change that.

“I used to be the president of the Multicultural Student Association at Community College of Baltimore County Essex, so creating a student organization focused on minorities, specifically African Americans within CS, seemed like a good idea to me,” he said.

So, in 2016, the African-American CS Group was born. In the beginning, Mancho operated much like a one-man band to get the organization up and running and generate interest.

“In the beginning it was pretty rough because I didn't even have any other members and I had to do pretty much everything by myself,” he recalled. “A lot of events that I had, I had to do everything from hosting the events to advertising them. I remember one event where I paid out of pocket for a few boxes of pizza and drinks and only one person showed up.”

But by the following year, the African-American CS Group had a slate of events—game nights, cookouts and Tech Talks with corporate representatives where students could learn about different computer science jobs—and executive board members to help put on those events. The group also had a new name, Code:BLACK.

“We thought that the name African-American CS Group was not only generic, but also not very inclusive,” Mancho explained. “So we thought something cooler sounding, for lack of a better term, would be better. One of my executive board members and I had a brainstorming session and we came up with the name Code:BLACK.”

By the time Code:BLACK became a known entity on campus, it had fully transformed into what Mancho initially envisioned for the group.

“In the beginning I just wanted to create a community for minority computer science students to uplift and help each other,” he said. “Our events were planned to help students professionally, by connecting them with different tech companies, helping them with their resumes and answering questions they may have about interviews. We also created a safe space where they could socialize and talk about their future plans, network and make friends with similar interests.”

Through Code:BLACK, Mancho also advocated for computer science students to be able to attend the AfroTech Conference, one of the largest multicultural technology conferences in the country.

Current sophomore computer science major Samara Wondimu is one of 28 students and three staff members from UMD who attended the virtual 2020 AfroTech Conference, thanks to the department’s Iribe Initiative for Inclusion & Diversity in Computing diversity conference scholarship program.

“It was amazing to see how many people attended the conference virtually. It almost felt like I was attending in person because I had so many great conversations with people through the conference’s online platform,” Wondimu said of her experience. “It was so cool to see that many people within the tech industry that are Black or a minority.”

Wondimu is Code:BLACK’s historian and community outreach coordinator and is a computer science major thanks in-part to the organization.

“I came to Maryland thinking I wanted to be a mechanical engineer, but then I took a free online mobile app development course through the nonprofit organization CodePath, which I learned about from Code:BLACK,” Wondimu said. "I really enjoyed that it incorporated both my love for problem-solving, as well as design, and that I was able to build something from scratch and see it used in the real world. The mobile apps course really helped me solidify my career goals and allowed me to realize that computer science was for me.”

Wondimu learned about Code:BLACK her freshman year during the First Look Fair. She decided to attend a general body meeting and loved the comradery she found there.

“I thought it was pretty cool to see the community and support system they built within the organization, and after a few meetings I learned about internships and ways I could have a career in computer science,” she said.

Wondimu and fellow Code:BLACK member Jessy-Manuella Tientcheu are paying it forward now by helping to develop a mentorship program for high school students who may be interested in computer science. Working with Code:BLACK and Kate Atchison and Charlotte Avery from the Iribe Initiative for Inclusion & Diversity in Computing, the goal is to have workshops and one-on-one mentoring with high school students to expose them to the various career paths available within computer science. They plan to hold these activities virtually at first, then have in-person programs in the future once it’s safe to do so.

When Mancho looks at Code:BLACK now, he’s proud of how it has been able to make an impact in people’s lives. Even his own. Mancho credits Code:BLACK for the professional connection that helped him get his current job as a software engineer at Microsoft.

“One of my friends in Code:BLACK told me about Code2040, which allows people who are of Indigenous, Latinx or African American backgrounds intern at a top tech company, and that's how I got an internship that gave me the experience to be able to do the job that I have now,” he said.

Seeing people like Mancho go on to be successful in the computer science world is what makes Code:BLACK so important, according to Wondimu.

“A community like Code:BLACK is really important because they provide a really necessary support system and a launchpad for Black students to overcome adversity in the classroom that comes along with being a minority,” she said. “It's really difficult to envision yourself being successful within tech when you're not able to see other people like you in those jobs that you want to be in. But having that support system and being able to look around you and see that there are plenty of other students who have been through the same situations as you and they're also able to overcome, that is inspiring.”

Wondimu will participate in the Code2040 Fellows Program and join Slack as a software engineering intern in summer 2021.

When it comes to Code:BLACK’s future, Mancho hopes it doesn’t stop with Maryland.

“I want Code:BLACK to be an organization that's not only recognized within College Park, but in other places, because every school may not have the same support system or that same drive for diversity within their computer science departments,” Mancho said. “Computer science is an amazing major and unfortunately the lack of diversity can discourage people from pursuing it. However, I want people to know that Code:BLACK is here to tell every discouraged person that not only are you more than capable but you belong here.”