Crazy Ideas and the Power of Free Pizza 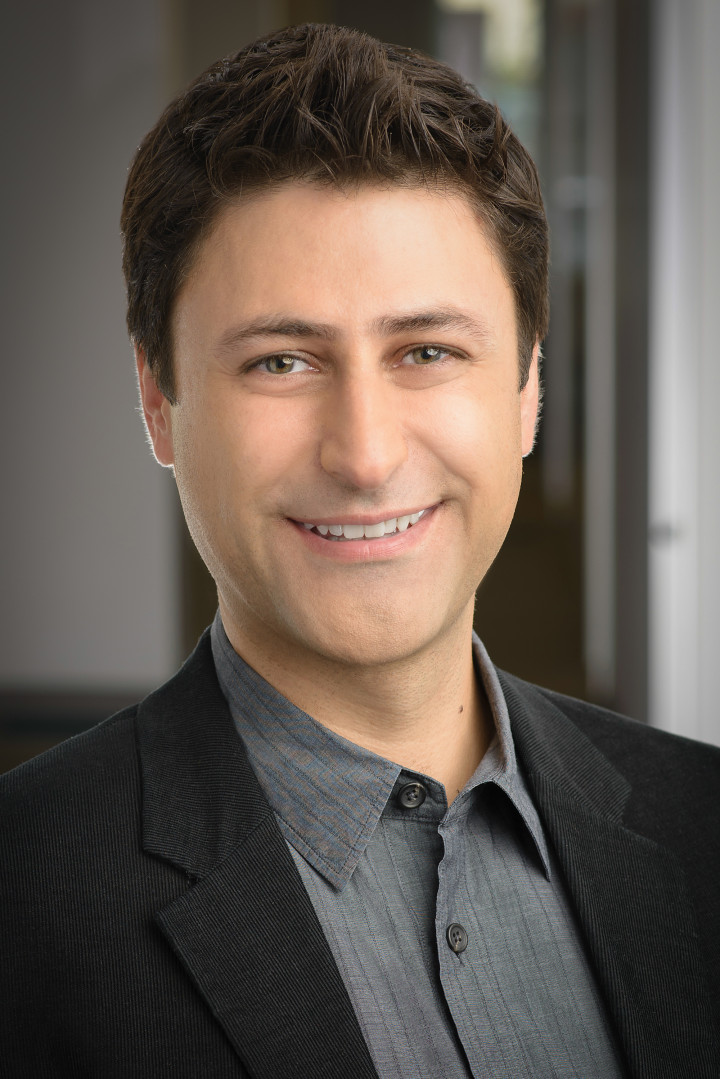 Twenty years ago, a young man named Shayan Zadeh took a giant leap of faith, traveling more than 7,000 miles from his home country of Iran to begin a graduate degree at the University of Maryland.

“I flew in through JFK, got to BWI and I’ve got a backpack and an admission letter, and I was like, let’s make a life,” Zadeh recalled.

For Zadeh, the decision to come to UMD for his master’s in computer science would open the door to an adventure he never imagined—and a career that would make him world-famous as a serial entrepreneur.

Zadeh co-founded one of the world’s largest online dating platforms—Zoosk—and then went on to orchestrate what has been called ‘the American comeback story of the year,’ taking over the bankrupt clothing retailer Dressbarn and bringing it back to life as an online-only business.

“Building products, building teams, building organizations, that’s just something that makes me happy,” Zadeh said. “And that’s why I do it. Not because I think I’ll be financially more successful or I will be more well received and respected, it’s about the work itself and solving that problem that’s energized me. If you don’t have that you won’t make it.”

A gift that changed everything

Zadeh grew up in a small town in the hills of western Iran. His parents—an electrical engineer and a science teacher—emphasized the importance of STEM and education, and they encouraged Zadeh and his two brothers to pursue careers in medicine. But one day when Zadeh was in middle school, his parents brought home a gift that changed everything—a Commodore 64 computer.

“In the first two hours we had it, I figured out how to write a program that would write my name forever on the screen and I got a kick out of that,” Zadeh explained. “And as I learned how to program and make the machine do the crazy things that were in my head, that just grew my interest. I spent more and more of my free time just coding and learning and reading articles in magazines to educate myself.”

Fast forward a few years and Zadeh was pursuing a degree in computer engineering at Sharif University of Technology in Tehran and looking ahead to the next big step—getting his graduate degree in the U.S.

“Since I was 7,000 miles away, it’s not like I could go and visit campus and decide which one is going to be a better experience,” Zadeh said. “So it was really down to looking at the reputations of the schools and their programs and areas that I was interested in. And UMD has a very strong computer science program. I assumed my career was going to be in academia in computer science, that was initially the plan.”

For Zadeh, who had never been to the U.S., UMD was an amazing experience. He loved campus life, and as he continued his research, his fascination with computer science grew. His passion for a future in academia, not so much.

“My focus in my studies was data mining and unstructured databases,” Zadeh said. “This was before data science and buzzwords around big data, and it was an area that really interested me. But I didn’t have the patience for years and years of research and submitting papers. It became very apparent to me that I would be a terrible academic.”

It was around that same time that Zadeh made a shift in his career plans to entrepreneur. How did it happen? Two words: free pizza.

“I saw a flyer for free pizza, and you know how grad students are if there’s free pizza, they show up,” Zadeh said. “So I showed up for one of these free pizza events and it happened to be a talk on entrepreneurship. I don’t even remember who the speaker was or what company he was talking about. I remember the pizza and I remember how excited this person was describing the day-to-day work that they were doing and the way they were talking about the product they built, that really stuck with me, and I started thinking, ‘Can I have that? Can I feel that way about my job?’”

Zadeh was hooked. He sat through more talks, even without pizza, audited business classes and eventually got involved in UMD’s annual Business Plan Competition with his UMD roommate, Alex Mehr (M.S. ’03, Ph.D. ’03, mechanical engineering). They made it to the finals, turning Mehr’s thesis—optimizing massive engineering projects through artificial intelligence—into a company. They even found investors who wanted to pursue it further.

“The years I was at Maryland really solidified in me that I wanted to become an entrepreneur and I could have crazy ideas that would be open to backing and support,” Zadeh said.

But Zadeh also learned that even with a great (crazy) idea, timing is everything. He couldn’t legally start a company while he was on a student visa. Instead, he was advised to secure a good job, get his immigration status in order, and then start a company. Which is exactly what he did.

“I got a job with Microsoft, went to Seattle, worked at Microsoft for four to five years and got my green card,” Zadeh said. “And pretty much the minute I got my green card, I quit my job and started what ended up becoming Zoosk.”

The nightmare before Zoosk

“This was 2007, so MySpace was huge, Facebook and social media were in their first days,” Zadeh recalled. “And we had this idea that since consumers are going to spend a ton of time on these platforms wouldn’t it be cool if we built a system that would allow businesses to do research on these platforms—what consumers want, what are the trends. That’s the company that we started.”

But growing that market research tool was a struggle; it was only adding four or five new users a day—not nearly enough. So Zadeh got the idea to build several different apps as a way to get users into the market research product. One of them—a dating app allowing singles to rate one another on their attractiveness—blew up.

“I remember it very clearly because it turned into a nightmare,” Zadeh said. “We launched the feature the day before Christmas and it exploded in popularity, and Christmas Day we’re calling everywhere because our servers are melting we have so many users and nobody is picking up the phone. And we’re saying, ‘Where can we get servers so these customers don’t have a terrible experience and the application doesn’t break?’ Long story short, it turned into the main thing, and the rest is history. It eventually became Zoosk.”

By 2019, Zoosk was huge, reporting more than 40 million members and over 30 million phone app downloads. That same year, Spark Networks purchased Zoosk for over $250 million.

And Zadeh, the internet-first entrepreneur, was just getting started. He applied his experience handling large amounts of data to health care, creating a flexible platform for streamlining operating room management.

“I built a company called Leap Rail that does kind of artificial intelligence software to help operating room administrators and surgeons use the resource more efficiently and minimize the waste,” Zadeh said.

Bringing brands back from bankruptcy

But it’s the changing world of retail that truly captured Zadeh’s attention over the last year, specifically storied American brands that have struggled as shopping moves away from brick-and-mortar stores and toward buying online. The COVID-19 pandemic has only accelerated the trend.

“There are so many well-known retail brands in America that have been struggling in the last year,” Zadeh said. “Toys R Us went bankrupt, Neiman Marcus went bankrupt, Dressbarn, Pier 1, the list is long. It’s not like people have stopped buying, they just buy differently. And a lot of these companies haven’t been able to adapt and evolve towards that model, which is understandable—they’ve been doing it this way for 40, 50, 60 years.”

Bringing these brands back from bankruptcy is a mission Zadeh wanted to take on.

“We were on the lookout for an opportunity to take one of these storied brands and apply our knowhow in terms of running an internet-first business and being e-commerce focused, and really take advantage of the strength of the brand and the customer loyalty,” Zadeh said. “Dressbarn was the first opportunity that came about.”

Now, as CEO of Dressbarn, Zadeh is making news around the world. The once-bankrupt clothing retailer that closed its more than 600 stores in December 2019 is now projecting $65 million in annual sales as an online-only business. And Zadeh is just getting started. He’s also working on a turnaround of Pier 1, another big name gone bankrupt. It’s not a path Zadeh expected to take, but he welcomes the opportunity and is still energized by the challenge of solving a problem.

“If you told me two years ago that I would be running Pier 1, I would say ‘What?’ You don’t know what life throws at you, but if you’re open to new opportunities sometimes you can get lucky and have a once-in-a-lifetime type of experience—like bringing a 60-year-old brand back from near-dead to a thriving business,” Zadeh explained. “It’s so satisfying and so unique and so different, that sometimes you pinch yourself that it’s real, it’s really happening.”

Always a Terp, Zadeh never forgets where his success story began. He’s still an avid Terps sports fan, still posts Maryland football scores on Twitter, and still gets involved in campus programs and projects when he can. And he still appreciates all the ways the University of Maryland changed his life.

“It’s not just the tactical courses and projects there, but also being part of that community and the support it has given me—from letting a kid from 7,000 miles away apply and be accepted into a prestigious program all the way to the business plan competition and helping me find my bearings,” Zadeh explained. “Maryland has been a very big part of my career, kind of like the launch pad, so it will always have really a special place in my heart.”