Pavan Ravindra ’21 becomes the fifth UMD student since 2018 to win the Churchill Scholarship to study at the University of Cambridge. He’s also president of UMD’s Rubik’s Cube Club, having clocked some of the world's fastest times solving it one-handed.
March 12, 2021 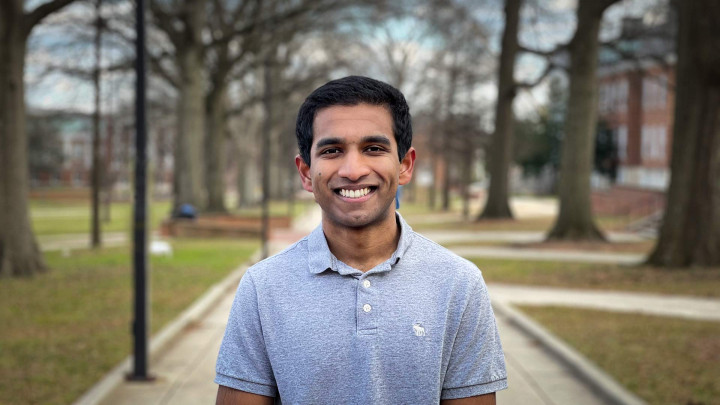 This article is republished from Maryland Today.

A University of Maryland senior studying biochemistry and computer science is one of only 17 students nationwide awarded a 2021 Winston Churchill Scholarship to pursue a one-year master’s degree at the University of Cambridge in the United Kingdom.

Pavan Ravindra—who was named both a Goldwater Scholar and a Merrill Presidential Scholar in 2020—will pursue a Master of Philosophy degree in chemistry after completing his dual degree at Maryland.

Five UMD students have received the award since 2018 and six total since its inception in 1963. The scholarship—valued at around $60,000—covers all educational fees and provides living and travel allowances.

“Pavan has excelled in the classroom and in his independent research efforts, with two published papers and an algorithm that is already being used by other researchers in academia and industry,” said College of Computer, Mathematical, and Natural Sciences Dean Amitabh Varshney. “The Churchill Scholarship will offer him unique opportunities to deepen his interests at the intersection of biochemistry and computer science.”

The Churchill Scholarship will allow Ravindra to join the ICE Group at the University of Cambridge, which focuses on computer simulations of catalytic and environmental interfaces.

“Cambridge has attracted researchers at the forefront of many different directions in theoretical and computational chemistry, and this scholarship gives me the chance to learn directly from these scientists,” Ravindra said. “Receiving this scholarship is a testament to the incredible mentorship I've received during my time at Maryland.”

Ravindra, who is from Clarksville, Md., previously received a citation from the Integrated Life Sciences program in the Honors College and a Banneker/Key Scholarship, in addition to his other awards.

In 2018, when Ravindra joined the laboratory of Pratyush Tiwary, an assistant professor in the Department of Chemistry and Biochemistry and the Institute for Physical Science and Technology, he and biophysics graduate student Zachary Smith tried to find a way to describe proteins and chemical systems more generally.

AMINO led to a first-author scientific paper for Ravindra, which was published in the journal Molecular Systems Design & Engineering in 2019, and a second-author paper that applied AMINO to complex biophysical problems, published in the Journal of Physical Chemistry in 2020. In addition, the open-source code is already being used by other research groups and pharmaceutical companies to help improve their modeling and workflow of drug design.

“Along with graduate students in my lab, Pavan has continued working on challenging problems combining the frontiers of physical chemistry with artificial intelligence. This includes new method development, as well as applications to different ambitious and relevant problems, such as how molecules fundamental to life—proteins, DNA and RNA—adopt different shapes and forms,” Tiwary said. “Predicting this flexibility is often the key to designing effective, nontoxic drugs for different diseases. Pavan’s methods are helping make it possible to predict this flexibility in an inexpensive, effective and insightful manner.”

Ravindra also worked at the National Institutes of Health’s National Institute of Neurological Disorders and Stroke with Jeffrey Smith ’73. There, he developed a computational model of neurons in the pre-Bötzinger complex, an area responsible for regulating intrinsic breathing patterns in humans.

Ravindra serves as a teaching assistant in both majors and is treasurer of UMD’s chapter of the American Society for Microbiology as well as a founding member and webmaster of the Informative Association for Maryland Science Advancement.

In his spare time, Ravindra is president of UMD’s Rubik’s Cube Club and organizes cubing competitions. He has ranked as high as fourth in the world for the fastest time solving a Rubik’s cube and second for solving it one-handed, setting five U.S. national records in the process.

After his time in Cambridge, Ravindra plans to pursue a Ph.D. in chemistry with a focus on computational and physical chemistry.

Chelsea Torres contributed to this article.