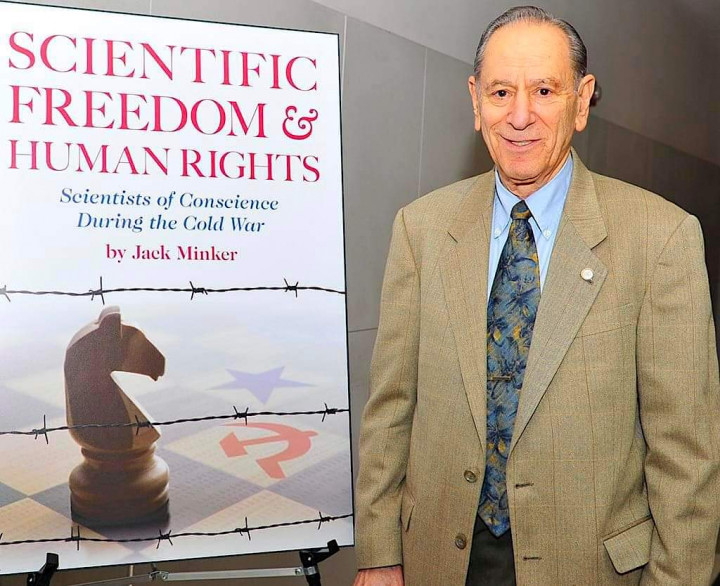 Jack Minker, professor emeritus and founding chair of the Department of Computer Science at the University of Maryland, passed away on April 9, 2021.

Minker was a pioneer in artificial intelligence, deductive databases, logic programming and nonmonotonic reasoning. He was also an internationally recognized leader in the field of human rights for scientists.

Minker joined UMD in 1967 and was among the first members of the University of Maryland Institute for Advanced Computer Studies. He served as the first chair of the Department of Computer Science from 1974 to 1979.

“Jack had a vision 50 years ago that all of science, and in fact all of society, would benefit from computing, which led him to advocate strongly for the University of Maryland to launch a department of computer science,” said Amitabh Varshney, professor of computer science and dean of the College of Computer, Mathematical, and Natural Sciences. “Jack witnessed his vision come to life here on campus—a vision that is still in full bloom today with thousands of people working on projects and ideas based in computing that are making our world better, safer and more productive.”

During his tenure as chair, Minker set a standard for excellence in research and teaching that led the department to be ranked among the top 12 computer science departments in the country—a recognition it still holds today.

“Everyone in the department acknowledges that our excellence rests on the foundation that Jack built for us over and beyond his career,” said Larry Davis, Distinguished University Professor Emeritus and former chair of the department.

Over his career, he edited or co-edited five books and authored more than 150 refereed publications in journals, conferences and books. He also served on the editorial board of numerous prestigious journals and was founding editor-in-chief of the Theory and Practice of Logic Programming.

A dedicated educator and mentor, Minker advised dozens of undergraduate, master’s and doctoral students at Maryland.

Minker also performed extensive service for the scientific community. Among these activities, he chaired the Advisory Committee on Computing to the National Science Foundation (NSF) from 1980 to 1982. His committee was instrumental in computer science being represented as its own discipline at NSF. He was also a member of the NASA Robotics Study Group, which made recommendations to NASA for robotics activities in support of space missions.

In addition, he served the Association for Computing Machinery (ACM) in many capacities, including as national program chair from 1968 to 1970. He was vice-chair of the association’s Committee of Concerned Scientists for nearly 50 years and vice-chair of its Committee on Scientific Freedom and Human Rights from 1980 to 1989. His reports in Communications of the ACM listed more than 300 computer professionals in 13 countries whose scientific freedoms and human rights had been violated. He even led the struggle for the release of computer scientist Anatoly Shcharansky and cyberneticist Alexander Lerner from the former Soviet Union. Most of the scientists listed in the reports were subsequently released.

“He was a Jack of few trades, the ones that mattered the most: doing the right thing, genuine caring about his students and colleagues, treating everyone with exceptional respect, passion about computer science and AI, human rights and leadership. He distinguished himself in each one of them,” said a former student, Simon Kasif (M.S. ’83, Ph.D. ’84, computer science), now a professor of biomedical engineering at Boston University.

Although Minker retired in 1998, he still performed research and service. His memoir, "Scientific Freedom and Human Rights: Scientists of Conscience During the Cold War," which documented his work with the Committee of Concerned Scientists and other human rights organizations, was published in 2012. He was invited to present lectures at international conferences in 2007, 2009 and 2010.

Minker was a Fellow of the ACM, IEEE, Association for the Advancement of Artificial Intelligence and American Association for the Advancement of Science. He received the ACM Outstanding Contribution Award for his work in human rights in 1985, the ACM Recognition of Service Award in 1989, the University of Maryland President’s Medal in 1996 and Distinguished Scholar-Teacher Award in 1997, and the prestigious ACM Allen Newell Award in 2005. He was recognized with the 2011 Heinz R. Pagels Human Rights Award from the New York Academy of Sciences for his work on behalf of scientific freedom and human rights for scientists.

In 2018, the department celebrated Minker’s life and accomplishments at an event that included more than 120 attendees and remarks by some of his former students, colleagues and collaborators. One of those students, Jorge Lobo (Ph.D. ’90, computer science), who is now the ICREA Research Professor in the Department of Information and Communication Technologies at Universitat Pompeu Fabra in Barcelona, spoke at the event and closed with the following observation.

“Jack’s technical work, as with his work in scientific freedom and human rights, is the result of a lot of persistence and patience,” Lobo said. “In this world, obsessed with social media and instant gratification, where people offer and find solutions to their problems in tweets and Facebook postings, Jack’s career reminds us that having a lasting impact, and in particular, impact for building a better world, requires smart, hard and persistent work.”

Minker loved the department, according to Davis, and left a legacy of support for future computer science faculty and students at Maryland.

“He endowed the first professorship in the department in 1992—the Jack and Rita G. Minker Professorship in Computer Science—and was delighted when Mohammad Hajiaghayi was named to that position,” Davis noted.

He is also survived by his large academic family.

“Dr. Minker has been more than an academic father to the large number of students in his research group. He has been a surrogate father who was there for us and our families at all times,” Ruiz noted. “He was a true family person and instilled in us the importance of forming a strong academic family; that view has kept us, his students across multiple generations, together over the years. Dr. Minker will stay forever in my heart and thoughts as a guiding star.”