From Super Mario Brothers to Spider-Man 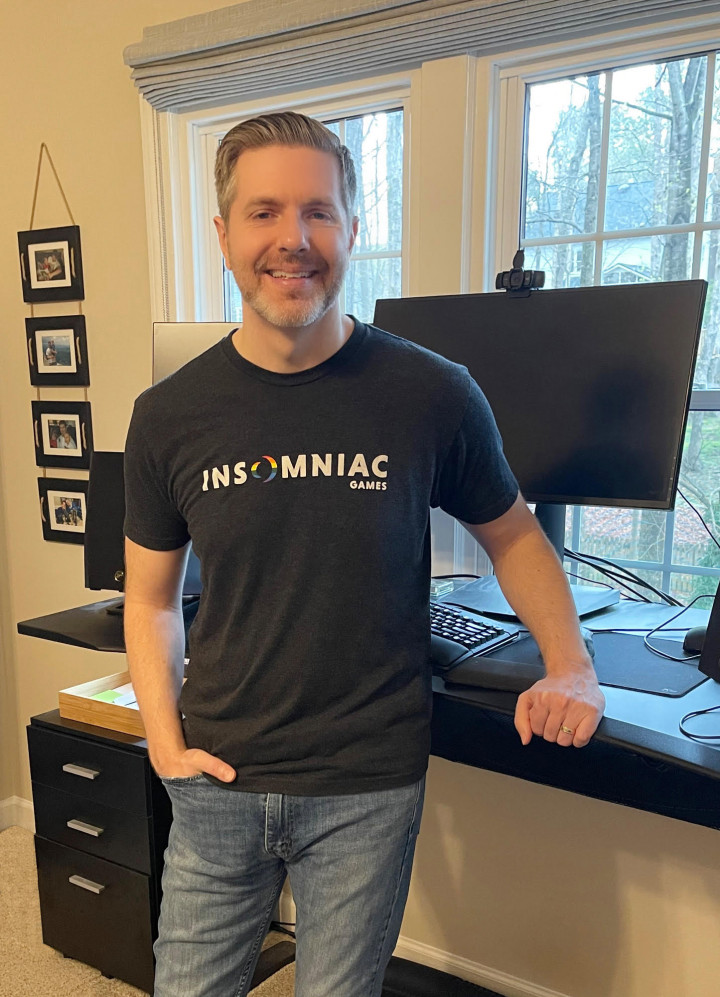 Some people take on the challenges of video games for fun. For Joel Bartley (B.S. ’00, computer science), it’s a full-time job. Bartley is a lead gameplay programmer for Insomniac Games, an award-winning developer of video games including popular PlayStation franchises like Rachet & Clank, Marvel’s Spider-Man and a host of others sold by the millions all over the world.

“One of the things that I really like about working with games is that it’s not like other programming jobs where you mostly work with other programmers and you might also work with the customer or project manager,” Bartley said. “In games, you get to work with all different kinds of artists and writers and just a huge variety of different types of people, which I really love.”

Growing up with Super Mario Brothers and Mega Man

Bartley grew up outside of Baltimore in Perry Hall, Maryland. He got hooked on video games early on.

“My grandfather had an Atari when we were growing up and then a Nintendo Entertainment System,” Bartley explained. “We didn't see my grandparents that often because they were an eight-hour drive away, but I remember I loved going to visit them and playing the games they had when I was young, like Pitfall! and Super Mario Brothers. Later, we had Nintendo consoles at home, and I was—and still am—a huge fan of Metroid, Zelda, Final Fantasy, Mario, Mega Man, and other classics of that era.”

In middle school, using a borrowed computer, Bartley discovered the wonders of programming.

“I was already really into games, and at the time you could go to the library and pick up books that taught you to ‘program your own game’ and they would list lines of code and you could just type them in verbatim,” Bartley said. “These were text-based games that would allow you to enter commands like, ‘Go west. Open door. Pick up rock.’ And that was sort of my first experience with programming.”

As Bartley moved on to high school, he knew he wanted to do more with computers. He took coding classes and did some programming on his own, but when he entered the University of Maryland as a computer science major in 1996, he realized he still had a lot to learn.

“I’d learned the basics before that, how to mess around with it, but nothing I’d call good programming practices,” he said.

From ray tracers to databases

Bartley’s classes at UMD opened him up to new skills and a world of possibilities in programming, computer graphics and more.

“I remember a computer graphics class that I took where we did a ray tracer and that was just super interesting to me,” Bartley recalled. “A ray tracer is a way of rendering graphics by bouncing light around the scene. You have some virtual objects, and you want to draw a picture of those objects on the screen, and you do it by tracing your light rays and determining what colors should be drawn based on what they hit and how many times they bounced. It was a fun project.”

When Bartley wasn’t boosting his computing skills in class, he was still playing video games whenever he could. But even when he graduated with his undergraduate degree in 2000, he still wasn’t thinking about game development as a career.

“I thought about it, but I didn’t go directly into gaming out of college,” Bartley said. “I think I was a little scared of horror stories I’d heard about people working ridiculous hours in the industry. Also, it was toward the end of the dot-com boom when I graduated. So, I got a job at a dot-com and that worked out for a year or so until the crash.”

In 2003, Bartley landed an associate position at the tech consulting firm Booz Allen Hamilton. But as time went on, he realized something was missing.

“I was a government consultant on a number of projects there, but I got pretty burned out, I guess, on the types of work I was doing, databases and things like that,” he said. “The end product was just not interesting to me.”

Bartley decided to turn his attention to something that was interesting to him—video game development. And he was ready to make a run at it as a career.

“It was clear at that point that you could make a living making games,” he said. “The gaming industry was still in its younger stages, but by then it wasn’t in its infancy anymore. It was a real job.”

Still working full time, Bartley started spending his nights and weekends hitting the books and scanning the internet, teaching himself everything he would need to know to go into game development. He knew it wouldn’t be easy.

“It was hard but not impossible,” he recalled. “One of the major things you have to know is 3D math—we use a lot of 3D math in making games. Luckily, I had a head start because I had learned the basics at UMD. I also had to get a little closer to the hardware in the types of programming that I was doing. In college I had programmed in C++, and games are also usually made in C++. But I had been working in C#, which is a slightly higher-level language, in my professional career up to that point, so I had to get back into C++ and do a little bit of learning about assembly language as well.”

In 2007, Bartley moved to North Carolina for a new position as a software engineer for Emergent Game Technologies, a middleware company that developed tools other game studios licensed to make their games. In the nearly two years that followed, Bartley’s work at Emergent taught him even more about game development. Then in 2009, a stroke of luck: Insomniac Games expanded from its Burbank, California, headquarters and opened a studio very close to where Bartley was already working. He landed a gameplay programmer position with Insomniac and never looked back.

“It was my dream job then and it still is,” he said.

The job merged his love for video games with the computing skills he’d worked hard to master.

“I started out doing hero programming, which is programming the main hero that you play as. I also worked on our game cameras, player weapons and a fair bit of network programming,” Bartley explained.

Now, more than just playing games, he was creating them.

“The first game I worked on was called Ratchet & Clank: All 4 One,” Bartley said. “We were taking our existing Ratchet & Clank franchise, which was always a single-player game, and we made a version where four players could all play at the same time on the same screen. I did a lot of work getting that four-player mode working when I first started, and I really enjoyed it.”

A strong foundation for every project

Ten years later, Bartley has moved up to the position of lead gameplay programmer at Insomniac Games. His responsibilities increased and the games became more complex over the years, some adding virtual reality (VR) and more. But the skills he learned in the computer science program at UMD still provide a strong foundation for every project he takes on.

“The programming skills that I learned at UMD are certainly the basis for everything I still do,” Bartley said. “The graphics class that I took there was great. There was a networking class where I learned a lot. I took my very first intro to programming class at Maryland, which I remember being quite good. I learned a lot of basics that I still use.”

Not surprisingly, Bartley still plays video games in his spare time. Now that he’s a game programmer as well as a fan, he sees his favorite games with a whole new appreciation. And he brings his love of these games to each one he works on.

“Of the games I’ve worked on, my favorite one to play is probably the remake of Ratchet & Clank that we made for PlayStation 4,” Bartley said. “It just takes everything we had learned up to that point from all the previous games in the franchise and puts it into one single package that has the best of everything—the same fun factor and the beautiful graphics and everything that series is known for. One of my other favorites to work on was Edge of Nowhere, which was our first VR game—a great experience.”

It may all look like fun and games, but Bartley is quick to point out there’s a lot more to creating video games than just having fun.

“Many people don’t realize what it takes to make video games happen,” he said. “There’s a common saying in game dev that it’s a miracle that any game releases ever—because they’re so complex, especially the big ones that we’re working on now. We just released Marvel’s Spider-Man: Miles Morales and a remaster of our first Spider-Man game last year. And those are huge enterprises, so many moving parts, so many things that have to go right along the way for it to come out and be good. It’s an amazing tribute to all the people we work with that it does get done.”

Thanks to hard work, determination and the love he’s had for video games since he was a kid, Bartley is exactly where he wants to be. And he can’t imagine doing anything else.

“I love what we do and the types of things that we can create. That’s something that never changes,” Bartley said. “I’m not sure exactly what role I’ll have in the future, but I think I’ll be making games for the rest of my career.”