UMD Researchers in the Top Scientists World Ranking By Guide2Research

Ten UMD faculty break into the top 1000 scientist rankings based on their prolific research output.
May 25, 2021 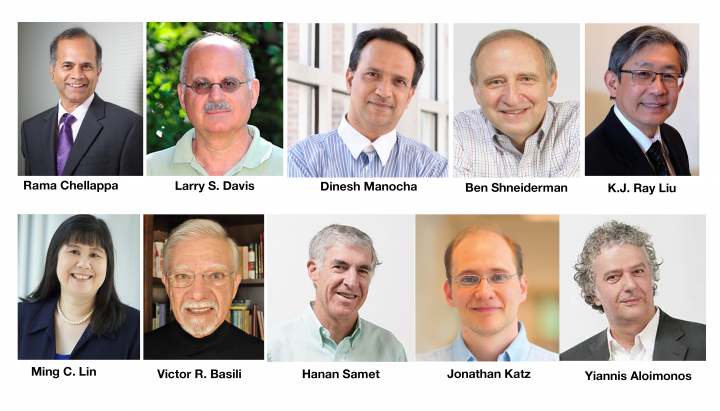 On May 11, Guide2Research released its 2021 7th edition of the top scientists ranking for computer science & electronics. The rankings are geared towards acknowledging the contributions of these top researchers and recognizing them as leaders in the field of computer science and electronics. Guide2Research ranked UMD Computer Science (UMD CS) as #9 in the world and #8 in the nation.

The prominence of UMD CS & ECE faculty, as measured by the citation frequency of their work, is due to the importance of their research and their capacity to communicate it. This implies that UMD students will be taught the latest research from UMD faculty, who are innovative leaders in the field.  Our faculty are sought out by colleagues, corporations, and governments for advice and collaboration, bringing new challenges for graduate students to pursue.  The groundbreaking work that has been done at UMD attracts younger researchers and strong graduate students, contributing to the vibrant atmosphere in the CS & ECE Departments.

Ramalingam “Rama” Chellappa (Ranked # 56 in the World , # 39 in the Nation), a college park  professor in electrical and computer engineering (ECE) is a pioneer in facial recognition technology. An internationally recognized expert in computer vision, machine learning, pattern recognition and artificial intelligence, Chellappa's work has had an impact on areas including biometrics, smart cars, forensics, and 2D and 3D modeling of faces, objects, and terrain and has a range of applications—including medicine. Chellappa has been a faculty member of the University for 29 years and served as chair of the department of ECE from 2011-2018 and as the Director of Center for Automation Research for 12 years. A Fellow of IEEE, IAPR, OSA, AAAS, ACM, AAAI and NAI, Chellappa holds eight patents. He is currently the  Bloomberg Distinguished Professor in the Departments of Electrical and Computer Engineering and Biomedical Engineering (School of Medicine) at Johns Hopkins. Chellappa has received many awards from IEEE, the International Association of Pattern Recognition, and the University of Maryland.

Larry S. Davis (Ranked # 74 in the World , # 50 in the Nation), a college park professor in the department of computer science is a world leading expert in computer vision. An Emeritus Professor, Davis’s research focuses on object/action recognition/scene analysis, event modeling and recognition, image and video databases, tracking, human movement modeling, 3-D human motion capture, and camera networks. He was the inaugural director of the University of Maryland Institute for Advanced Computer Studies and served as the chair of the department of computer science from 1999-2012. Davis is also affiliated with the computer vision Laboratory in CfAR for which he served as the head from 1981-1986. A fellow of IEEE, IAPR, ACM, Davis received the USM Board of Regents Research Excellence Award in 2019. Davis is currently a senior principal scientist at Amazon, while continuing to perform research and advise several graduate students in the UMD, department of computer science and UMIACS.

Dinesh Manocha (Ranked # 76 in the World , # 51 in the Nation), is a Distinguished University Professor of the University of Maryland, where he is the Paul Chrisman Iribe Professor of Computer Science and Professor of Electrical and Computer Engineering. He is also the Phi Delta Theta/Matthew Mason Distinguished Professor Emeritus of Computer Science at the University of North Carolina at Chapel Hill. Manocha’s research focuses on AI and robotics, computer graphics, augmented/virtual reality, and  scientific computing. He co-leads a major research group UMD GAMMA with more than 25 members on geometric and simulation algorithms with applications to computer graphics, robotics, affective computing,  and virtual environments. The GAMMA group has won more than 17 best paper awards at leading conferences and  developed a number of software technologies that are licensed to more than 60 commercial vendors. A Fellow of AAAI, AAAS, ACM, IEEE and the Sloan foundation, Manocha is a member of the ACM SIGGRAPH Academy, and a Bézier Award recipient from the Solid Modeling Association. He received the Distinguished Alumni Award from IIT Delhi and the Distinguished Career in Computer Science Award from Washington Academy of Sciences.  Manocha was also the co-founder of Impulsonic, a developer of physics-based audio simulation technologies, which was acquired by Valve Inc in November 2016.

Ben Shneiderman (Ranked # 77 in the World , # 52 in the Nation), is an Emeritus Professor in the department of computer science  and the Founding Director (1983-2000) of the Human-Computer Interaction Laboratory. A fellow of the AAAS, ACM and IEEE, and a member of the National Academy of Engineering, Shneiderman’s cutting edge research contributes to human-computer interaction and information visualization, including the direct manipulation concept, clickable web-link, touchscreen keyboards, dynamic query sliders for Spotfire, development of treemaps, innovative network visualization strategies for NodeXL, and temporal event sequence analysis for electronic health records. Shneiderman received the ACM CHI (Computer Human Interaction) Lifetime Achievement Award in 2001.

K. J. Ray Liu (Ranked # 273 in the World , # 177 in the Nation), is a Distinguished University Professor of the University of Maryland, where he is the Christine Kim Eminent Professor of Information Technology. He was the recipient of two IEEE Technical Field Awards: the 2021 IEEE Fourier Award for Signal Processing and the 2016 IEEE Leon K. Kirchmayer Graduate Teaching Award, IEEE Signal Processing Society 2009 Technical Achievement Award, IEEE Signal Processing Society 2014 Society Award, and over a dozen of best paper/invention awards. Recognized by Web of Science as a Highly Cited Researcher, He is a fellow of IEEE, AAAS, and U.S. National Academy of Inventors. Liu is the 2021 IEEE President-Elect.

Victor R. Basili  (Ranked # 442 in the World , # 279 in the Nation), is an Emeritus Professor at the department of computer science. Basili is well known for his works on measuring, evaluating, and improving the software development process, as a pioneer of empirical software engineering, He served as the department chair from 1982 to 1988. Basili was one of the founders and principals in the Software Engineering Laboratory (SEL) at NASA/GSFC (1976 - 2001). Basili created the University of Maryland Institute for Advanced Computer Science (UMIACS) and was the founder of the Fraunhofer Center for Experimental Software Engineering – Maryland (CESE), where he served as Executive Director from 1998 - 2004. Basili’s research work focused on measuring, evaluating, and improving the software development process and product. He is also a fellow of IEEE and ACM.

Hanan Samet (Ranked # 499 in the World , # 311 in the Nation), is a Distinguished University Professor. He is a pioneer in research on quadtrees and other multidimensional spatial data structures for sorting spatial information. He has profoundly influenced the theory and application of these areas of research and his impact can be seen in many real-world applications including Google Earth, the world’s most widely used graphics application.  Samet recently developed the NewsStand CoronaViz  - a web application to track the progress of the COVID-19 virus over time to be better prepared to anticipate its emergence and spread. A fellow of IEEE, ACM, AAAS and IAPR, Samet has many prestigious awards to his credit including IEEE Computer Society W. Wallace McDowell Award, ACM Paris Kanellakis Theory and Practice Award and UCGIS Research Award. He was the Founding chair of ACM SIGSPATIAL and Founding Editor-in- chief of ACM Transactions on Spatial Algorithms and Systems.

Jonathan Katz (Ranked # 679 in the World , # 416 in the Nation), is a Professor in the department of Computer Science. Katz is an international leader in cybersecurity who has worked on various aspects of cryptography, blockchain and cryptocurrencies, and theoretical computer science. He served as the director of the Maryland Cybersecurity Center at the University of Maryland from 2013- 2019, and was named a Distinguished Scholar-Teacher at UMD in 2017-2018. He is also an IACR Fellow. From 2019-2020, Katz held the title of Eminent Scholar in Cybersecurity in the Volgenau School of Engineering at George Mason University.

Yiannis Aloimonos (Ranked # 960 in the World , # 594 in the Nation), is a Professor in the department of Computer Science and the director of the Computer Vision Laboratory. He leads the Perception and Robotics Group at the University of Maryland. His research is devoted to the principles governing the design and analysis of real-time systems that possess perceptual capabilities, for the purpose of both explaining animal vision and designing seeing machines. He is known for his work on Active Perception and visual motion analysis. Aloimonos introduced action grammars as a framework for understanding human activity and robot learning. His research work also led to the introduction of language tools into the Robotics community. During the past five years his research has been supported by the EU, the NSF, ONR, DARPA and NIH.

Guide2Research is an online research portal widely used by the computer-science and electronics community. It bases its rankings on the h-index (measure of scientific research impact) provided by Google Scholar and by DBLP, a German-based computer science bibliography website. It includes only leading scientists with an H-index of at least 40.