Students took advantage of on- and off-campus resources to advance their careers
July 12, 2021 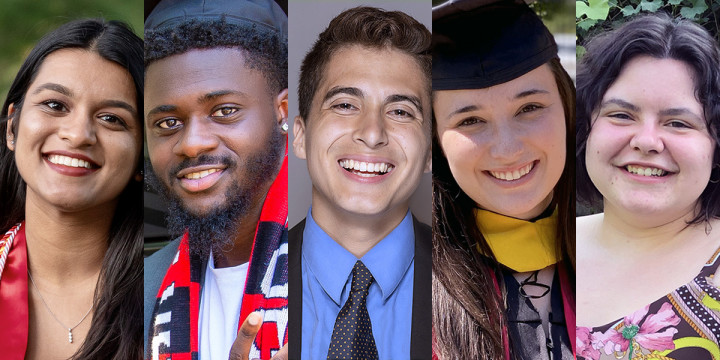 An internship can launch a career—at least that’s what several computer science majors who graduated from the University of Maryland in May learned from experience.

Gesna Aggarwal entered her senior year with a job offer from Microsoft in hand after interning with the company in summer 2020. Though her internship was virtual, she forged connections with her team at Microsoft that led her supervisor to recommend her for a full-time job. And she’s not the only one.

Using internship connections and experience, as well as professional development resources and programs on campus, computer science graduates at Maryland ladder their internships to careers post-graduation. Five of their stories are featured below.

When it came to preparing for her first internship interview in 2018, Gesna Aggarwal (B.S. ’21, computer science) did her homework and leaned on her friends for support. Aggarwal teamed up with her computer science classmates, role-playing as both interviewer and interviewee and using whiteboards to play out the technical interview (a coding exercise to determine a candidate’s proficiency in computing) to get ready for the real interviews ahead.

“There’s value in putting yourself in either role, as interviewer and interviewee,” Aggarwal said. “I used to bug my friends, ‘Hey, are you free? Let’s get together and practice.’ I’d send them a calendar invite to meet in the Brendan Iribe Center and we’d use the whiteboards to prepare for technical interviews.”

Networking was important, too. Aggarwal’s involvement in the First-Year Innovation & Research Experience (FIRE) and the Quality Enhancement Systems and Teams (QUEST) Honors Program enabled her to expand her network with other students and alumni. Using the QUEST alumni database, Aggarwal connected with Radhika Kshirsagar (B.S. ’17, computer science), who was then working with JPMorgan Chase as a software engineer. After meeting for an informational interview, Kshirsagar provided Aggarwal with a referral for an internship with JPMorgan Chase, where Aggarwal explored her career options in financial technology in summer 2019.

Aggarwal’s strong network of connections paid off again when she pursued her next internship for summer 2020. In 2018 and 2019, while working on sponsorships for Technica—the world's largest hackathon for underrepresented genders that’s hosted at UMD and run by students—she developed relationships with recruiters from companies that sponsor the hackathon, including Microsoft. After Aggarwal contacted the Microsoft recruiter to ask about internship opportunities in fall 2018, she was eventually able to secure an interview—and later, the internship.

What advice would Aggarwal share with current students? She emphasized the importance of networking through campus clubs and organizations.

“I would absolutely recommend joining organizations on campus that align with your career goals,” Aggarwal said. “That was the best way I was able to form deeper connections with people in my industry during undergrad, because through your similar club experiences and shared interests, you’ve already formed common ground.”

For Madelyn Forrester (B.S. ’21, computer science), hearing from her peers in the computer science program how they excelled academically and professionally encouraged her to push herself. Her involvement in the Honors College’s Advanced Cybersecurity Experience for Students (ACES) ultimately led to her full-time job with Salesforce.

“The ACES minor allowed me to take deeply technical courses that gave me introductions to tools used directly in my field of work,” Forrester said. “Specifically, the ACES reverse engineering course [HACS 208E] gave me a perspective on cybersecurity that I would have been unable to find outside of UMD. Being a part of ACES had an immense impact on my professional career.”

After interviewing with Salesforce during an ACES career fair, Forrester interned with the company’s Computer Security Incident Response Handling Team in summer 2020. Throughout her internship, Forrester and her manager discussed how she could achieve her professional goals by working with Salesforce after graduation. When recommendations for full-time offers came around, her manager served as a reference and coordinated with human resources to offer her a full-time position. She joined the Salesforce Government Cloud Team in July 2021.

John Gansallo (B.S. ’21, computer science) credits his on-campus experiences and involvement with UMD organizations and programs for his success in landing internships at high-profile companies including Booz Allen Hamilton and Adobe.

“Within Code:BLACK at UMD, I built strong coalitions and relationships with the most driven and determined people I’ve ever met in my life,” Gansallo said. “My experience with Code:BLACK had a huge impact on my college career growth and helped me learn cutting-edge technology and network with a diverse set of people.”

In addition to Code:BLACK, Gansallo participated in hackathons and tech conferences that helped guide his career path. In 2019, he attended the AfroTech Conference (thanks to a scholarship from the Iribe Initiative for Inclusion and Diversity in Computing) and tried out new technologies, attended workshops led by industry professionals and networked with top software engineers across the country. Participating in UMD’s Bitcamp hackathon and other hackathons also enabled him to delve into his tech interests, learning and building new technologies of his own.

“Whether it was for obtaining an on-campus job that exercised my technical skills, extracurricular activities that gave me more exposure to the tech industry or getting sponsored to attend tech conferences, CMNS was the root of all the wonderful opportunities I encountered,” Gansallo said.

Looking ahead, Gansallo envisions his role with Adobe feeding into his longer-term career goal of moving into management. Working for a company where he has opportunities for upward mobility and can contribute to a cause he cares about is a priority for Gansallo, and he is excited to begin working for Adobe at the intersection of data and personalized customer experience.

From the time he was in high school, Immanuel Garcia’s (B.S. ’21, computer science) involvement with the Hispanic Scholarship Fund (HSF) provided him with opportunities for growth. The most important of which may have been the HSF STEM Summit that ultimately led to an internship and later a job offer from Electronic Arts (EA).

Garcia had a preliminary technical interview with EA in summer 2019, followed by an interview at the HSF STEM Summit in September 2019 that led to an internship with the company in summer 2020.

The support Garcia received from his supervisor at EA (the hiring manager who conducted the preliminary interview as well as the interview at the summit) helped him realize the value he brings to the workplace—and set him on a path to success.

“There are truly people out there that really just want you to succeed. That was true during the interview process and throughout my internship with EA,” Garcia said. “And I think that’s important as you’re going through an internship—the people around you, they’re not trying to see you fail, they’re there as resources all the time.”

A month after his internship with EA, Garcia received a full-time job offer from the company, and he is now living in California and working with the same team he interned with in 2020. Garcia’s focus is primarily on using GitHub, a website and cloud-based service that helps developers store and manage their code, to create internal tools that enable game teams to expedite game updates.

When Hannah Locraft (B.S. ’21, computer science; B.S. ’21, mathematics) applied to intern with Amazon during her sophomore year at Maryland, she didn’t feel qualified. She hadn’t done an internship previously, but she had completed research projects and participated in professional development activities through ACES, which set her up for success.

“Looking back on it now, the experiences I had at the time showed that I was passionate about computer science, but they also showed my passion for learning and teaching,” Locraft said. “As I found out when I worked there, a passion for learning is one of the core values at Amazon.”

This summer, Locraft will return to work in artificial intelligence with the Alexa speech recognition engine as a member of the same Amazon team she interned with in 2019 and 2020. Locraft interned in person in 2019 and remotely in 2020 and found that, in both environments, she was able to expand her technical knowledge while also learning how to approach problems and represent herself and her work. And although the virtual internship experience made it more difficult for Locraft to feel connected to her team, the support she felt from her mentors and managers at Amazon made her excited about the full-time opportunity the company eventually offered her.

“I could tell that they wanted me to succeed wherever I ended up,” she said.

“Don’t be afraid to go for something that you don’t feel qualified for or that you don’t think you’ll get,” she said. “I didn’t think I would be able to get a job working with a company like Amazon, but I applied anyway, and it got me where I am now.”