From the Floundry to the Hatchery 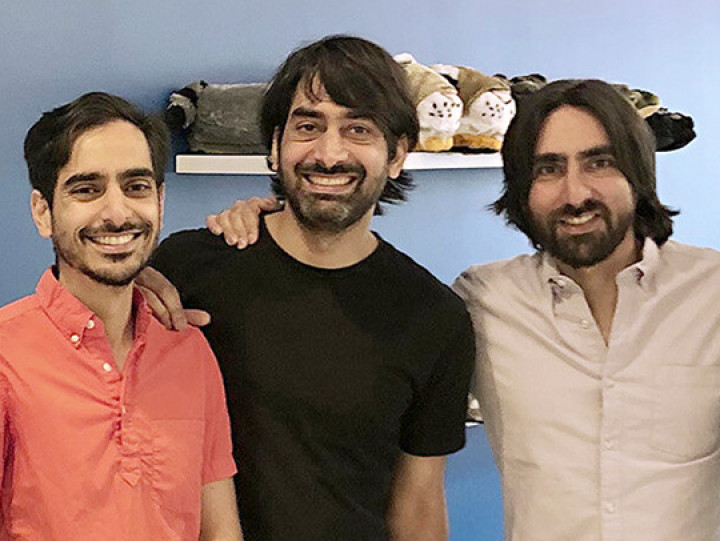 From Left to right- Idris, Zeki and Haroon Mokhtarzada

Idris Mokhtarzada (B.S. ’10, computer science) took his first computer science class at the University of Maryland before he even started high school. He and his older brother Haroon (B.A. ’01, economics) still get a kick out of telling the story.

“In the summer after middle school, my mom actually put me into Computer Science 100 or 101 at Maryland,” Idris recalled. “She got permission from the dean who basically said, ‘He can audit the class as long as the professor is fine with it.’ The teacher said it was ok, so there I was, this little kid sitting in the class surrounded by older students.”

“His feet didn’t even touch the floor when he sat down in the chair,” Haroon explained. “He was that tiny.”

“It was great! It was exciting and I got a B in the class, so that was nice,” Idris said. “That really jump-started my knowledge about programming.”

In the years since, Idris, Haroon and their brothers Zeki (B.S. ’01, computer science) and Yahya (B.S. ’06, government and politics) have become startup superstars. Their latest venture, the finance management app Truebill, just hit a million customers. And as angel investors in more than 100 startups, the Mokhtarzadas have helped other entrepreneurs launch their businesses as well.

This fall, Haroon, Idris and Zeki came back to College Park on a different mission—they’re funding a new startup incubator in UMD’s Department of Computer Science to help students turn their entrepreneurial dreams into viable, sustainable ventures.

In September 2021, the Mokhtarzada brothers launched their new incubator, called the Mokhtarzada Hatchery, in the Brendan Iribe Center for Computer Science and Engineering. Every year, it will provide up to four teams of student entrepreneurs with seed funding of as much as $10,000, plus working space and mentoring and networking opportunities. For student startups, the Hatchery is designed to fill a crucial niche.

“There seems to be this gap where you have student groups who get a lot of support early on to develop an idea but that transition from this idea to a business that is going to get a serious round of funding is missing,” Zeki explained. “This is a major missing piece, getting ideas to hatch. You’ve got the kernel of the idea, but how do we get it off the ground and really get legs of its own?”

It’s just the kind of challenge the Mokhtarzada brothers love.

“Startups are fun, right? For me, it’s fun,” Idris said. “Building is kind of my hobby. And so, this is an extension of that.”

But there’s something else driving this project.

“I’ll tell you the real reason,” Haroon said. “It’s important for us because we got our first business started at UMD. And I think there’s something right about coming back to the place you started.”

The connection between the Mokhtarzada family and the University of Maryland crosses two continents and two generations.

“Both our parents went to the University of Maryland, they met there,” Zeki said about his father Mohammad Mokhtarzada (B.S. ’70, zoology; M.A. ’74, sociology) and his mother Ilhan Cagri (B.A. ’00, Ph.D. ’05, linguistics). “My mother grew up in the states, she’s Turkish. My father was a foreign student from Afghanistan. After my father finished his master’s degree, they decided to move back to Afghanistan. In the early ’80s, we were in Afghanistan, the Russians invaded and the war started to get bad so we came to America when I was five.”

Growing up in the Maryland suburbs, computers were part of life.

“My parents had a business where they helped people get passports and visas. They ran the office out of our house and they had computers and I just always loved it,” Zeki explained. “When I was in my teens, my father encouraged me to start getting involved in programming and the database software that the office was using, so I just got the exposure and I always enjoyed it.”

Zeki and Idris shared that passion for computers. Haroon had other ideas.

“My DNA is entrepreneurship,” Haroon explained. “Even when I was young, I had a lawnmowing business and a magic show business and a snow shoveling business and things like that. So that’s where my passion was, and I was motivating enough to get my brothers to help me.”

While Zeki and Haroon were roommates at UMD, they started building a do-it-yourself website company in their dorm room that eventually became Webs.com. It was the brothers’ first venture together. Yahya and Idris—who wasn’t even in college yet—pitched in. And their hard work paid off.

“We bootstrapped the company for a while and we raised venture funding,” Haroon recalled. And then we sold it to Vistaprint for about $120 million 10 years later in 2011.”

The brothers stayed with Vistaprint for a few years, but by 2015 they were ready for something new.

“In 2015, we basically got back to Idris’ basement, and we said, ‘What do we want to do next?’” Haroon explained. “We started tossing around different ideas and formed a little thing we began calling the Floundry. Not the Foundry, but the Floundry, where we would literally flounder on ideas.”

It was definitely hit or miss.

“The first idea was kind of like a Peloton with virtual reality, so you could be on an exercise bike and do virtual reality,” Zeki recalled. “We started developing that idea but then it was like that won’t work it’ll get all sweaty, it’s going to take us a year to develop. After a couple of months, we decided rule one was that it’s got to be something we can launch in three months, and it has to be able to grow into a really big idea.”

“It was actually Haroon who came up with it,” Zeki said. “He was like, ‘This subscription thing, I bet people are paying for subscriptions for things they don’t know about.’ And I said, ‘Let’s try this—log into your bank account and dump your transactions.’”

It was their “aha” moment.

“While we were talking and joking around, I was in Excel building a macro to do statistical analysis on the transactions, whether they happen once a year, twice a year or 12 times a year,” Zeki said. “Haroon was paying for an alarm company every month on a house he didn’t live in anymore. I was paying Audible monthly and I didn’t even know we had an Audible subscription. Idris had another subscription he didn’t know about. Yahya also. And we realized this is a problem.”

Together, the four Mokhtarzada brothers co-founded Truebill, an app that helps users manage their bills and online subscriptions. Just six years old, the company is blowing up.

“Truebill is doing really, really well,” said Zeki, who now works as an advisor to Truebill and as CTO at Tenovos, an online software company in the digital marketing space. “We’ve done several rounds of funding, the last round we raised $45 million. We have thousands of customers signing up every day. We’re in a place where we can say we advocate for consumers’ financial health.”

Never forgetting where they came from

Even after all these years, success is not something the Mokhtarzadas take for granted.

“It’s easy to get caught up in, ‘Oh we did this right and we did that right,’ but at the end of the day, we’re just fortunate and very lucky,” reflected Idris, who is Truebill’s CTO.

And they never forget where they came from.

“My mom really ingrained that into us,” explained Haroon, who is CEO of Truebill. “Our family got out of Afghanistan in time, but many families did not, so we grew up with this context. We could have been one of those people, so we’ve got to take the privilege we’re given and actually use it for something meaningful and good.”

For the Mokhtarzada brothers, launching the Hatchery is a way to do just that.

“I don’t think you could do this at just any school,” Idris said. “At Maryland, you have an incredible program, incredible professors, incredible students, incredible alumni. Plenty of alumni have gone on to do great things. We want to continue that and make that happen more often.”

The Mokhtarzada Hatchery will select four teams every fall, pairing each with a successful entrepreneur to mentor them, provide support and help them track their progress as they navigate the challenges of the startup process.

It’s all about paying it back and paying it forward.

“I think what the Hatchery does is a couple of things,” Haroon explained. “It pays back the University of Maryland a little bit and pays it forward in the UMD community. I think this is missing in the D.C. metro area. There’s a reason people are going to San Francisco and that’s because they have incubators that are very focused on getting entrepreneurs out and building companies. That’s something that we’d love to replicate closer to home.”

Their dream became easier to achieve in 2019, when Truebill’s headquarters moved from San Francisco to Silver Spring, Md. and UMD opened a new state-of-the-art facility, the Brendan Iribe Center for Computer Science and Engineering, and offered the brothers space for the Hatchery.

The goal is simple: foster success, one student venture at a time.

“There are a lot of lessons that people in the startup world have learned that college students haven’t and they don’t teach in college,” Idris reflected. “You need that sort of community, and if I can help push that forward, that’s a really cool thing.”