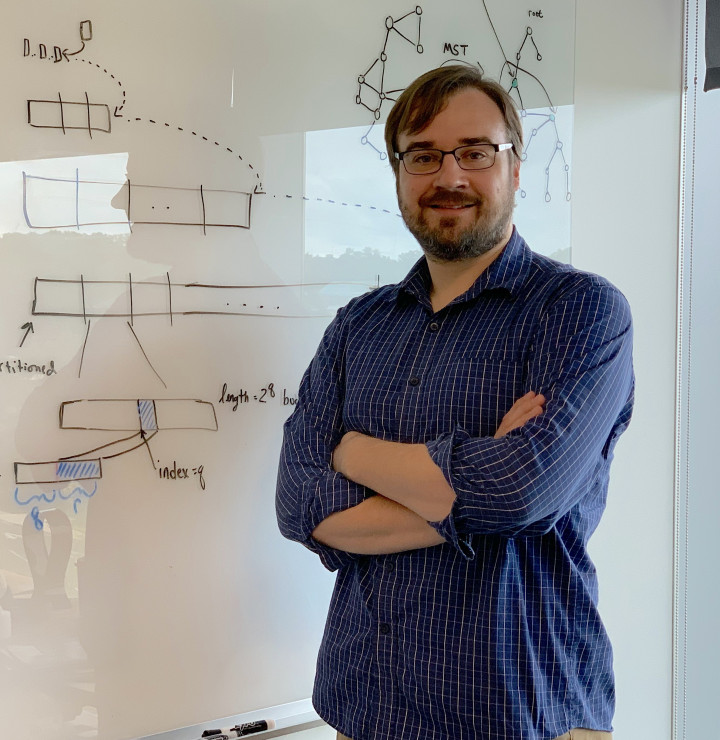 Rob Patro, an associate professor of computer science at the University of Maryland, was part of a team recently honored with the prestigious Allen Newell Award for Research Excellence.

The award is from Carnegie Mellon University’s (CMU) School of Computer Science. It recognizes outstanding work from current or former CMU researchers that epitomizes the scientific philosophy of Allen Newell, a computer scientist and pioneer in the field of artificial intelligence who died in 1992.

Patro, who also has an appointment in the University of Maryland Institute for Advanced Computer Studies, was recognized with the Newell award for work he did as a postdoctoral researcher at CMU from 2012–2014.

He played a key role as part of a team that developed “Sailfish: Rapid Alignment-free Quantification of Isoform Abundance,” an open-source software tool for the quantification of gene expression from RNA sequencing data;  the paper was published in 2014.

Sailfish implements an efficient method for quantifying isoform abundance from RNA sequencing data that elides the traditional and computationally intensive step of sequence alignment, and that makes use of an efficient accelerated expectation-maximization procedure over a reduced representation of the data (counts of equivalence classes).

These methodological advancements allowed Sailfish to quantify isoform abundance over an order of magnitude faster than existing methods. For example, allowing the estimation of abundances from a dataset consisting of 150 million sequencing reads in 15 minutes, where prior tools took up to six hours.

Isoforms are RNA-molecules that arise from the same gene (genomic locus), but which differ in their specific sequence for a number of reasons (including alternative splicing, making use of different transcript start sites, or other reasons).

The expression of different isoforms may sometimes result in distinct or altered gene function within the cell. Estimating isoform abundance lets one quantify the gene expression in a biological sample, but also lets one explore the relative abundance of these different forms of the gene.

Patro collaborated on the Sailfish project with Carl Kingsford, the Herbert A. Simon Professor of Computer Science at CMU, and Steve Mount, an associate professor of biology at the University of Maryland.

The trio were formally recognized with the Newell award at CMU’s Founders Day event, held this year in August in an online-only format.