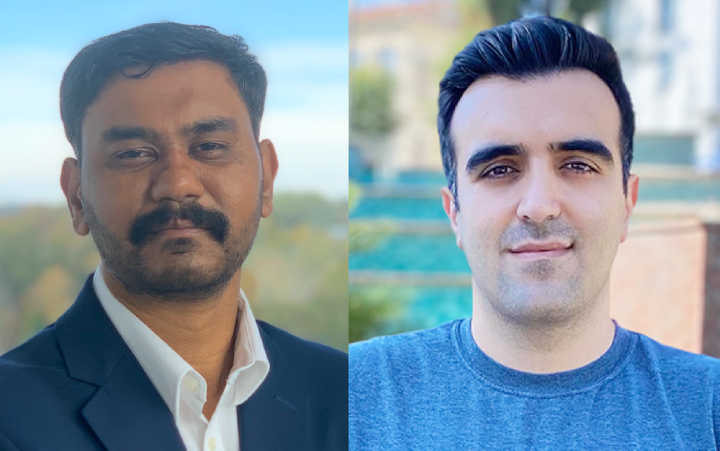 Two Ph.D. graduates from the Department of Computer Science have just been honored for the excellence of their research and scholarship.

The award is named for Larry S. Davis, a Distinguished University Professor Emeritus of computer science who served as chair of the department from 1999–2012 and founding director of UMIACS from 1985–1994.

“In my view, Nitin’s thesis is among the best theses that have come out of my lab in the last 15 years,” says Yiannis Aloimonos, a professor of computer science who leads the Perception and Robotics Group (PRG). “Nitin is a very independent, well-organized and highly creative leader with strong technical skills and excellent communication capabilities.”

Using on-board sensing and computation, Sanket has created a new area of research called minimalist cognition. His work—which has been applauded by aerial robotics experts—will enable abilities in robots on a scale never seen before.

“Nitin will be a leading figure in the field in five years’ time,” Aloimonos says, adding that Sanket is adept at working with both hardware and software since he has “one foot in engineering and the other in computer science.”

Sanket is currently a postdoctoral researcher in PRG and an assistant clinical professor in the First-Year Innovation and Research Experience (FIRE) Autonomous Unmanned Systems.

In recommending Behnezhad for the award, his adviser Mohammad T. Hajiaghayi noted the dissertation was one of the “deepest and most exciting” that he has read throughout his career.

“Soheil’s dissertation has far-reaching consequences both theoretically and practically,” says Hajiaghayi, the Jack and Rita G. Minker Professor of Computer Science. “It advances our understanding of large-scale algorithms on many fronts.”

Behnezhad began his position as Stanford University’s Motwani Postdoctoral Fellow in August, and will join the Khoury College of Computer Sciences at Northeastern University as an assistant professor next fall.