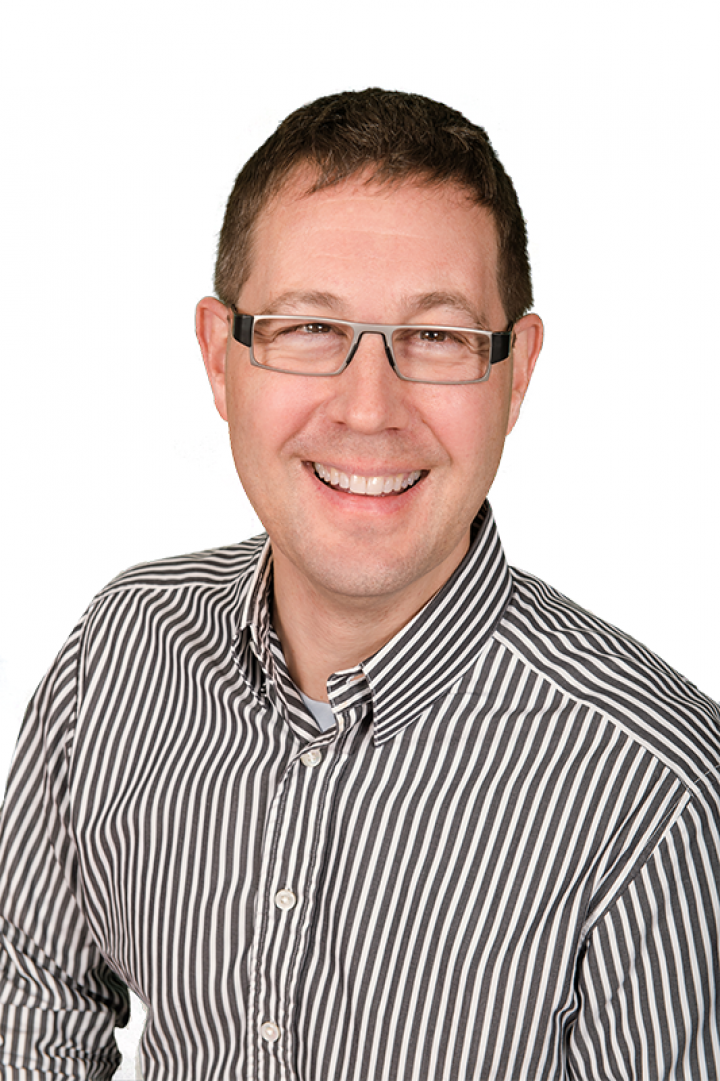 Back in second grade when other kids were messing around with the usual toys and games, Dave Baggett (B.S. '92, computer science and linguistics) discovered something way better—his mom’s computer.

“The tantalizing prospect to me at age seven was this computer was like an infinite box of toys,” Baggett recalled. “Back then, when you got a toy, it was a physical object you had to go buy. I was intrigued by the prospect that I could actually make my own. I was fascinated with every aspect of computers and computing.”

Baggett is still finding treasures in that infinite box of toys. In his 20s, he made video game history as a co-developer on Sony PlayStation’s hugely successful Crash Bandicoot game, which sold millions of copies worldwide. Baggett later co-founded ITA Software, which revolutionized online travel search. He eventually sold it to Google for $700 million—and it became Google Flights.

Now, Baggett is founder and CEO of INKY Technology, an award-winning cybersecurity startup located in College Park that uses artificial intelligence (AI) and machine learning tools to help companies fight spam, phishing and malware. For Baggett, it’s all about solving difficult, practical problems with software products that “regular people” can relate to.

“I like working on stuff that has a lot of technical challenge to it but is comprehensible to the average person,” Baggett explained. “You know how you get those emails that look like they’re from Microsoft but they’re fake? We have AI that figures that out and gives people advice. People get that. I like finding solutions that regular people can understand and appreciate.”

The son of an electrical engineer and a freelance writer, Baggett’s first experience with computers was helping his dad build one.

“Back then, you could buy these computer kits and assemble the computer from parts,” Baggett recalled. “I was seven and I would get the right resistors out of the box and hand them to my dad and he would solder them in. It literally took six months and when he actually turned this thing on, it booted up and worked and I was amazed.”

From then on, Baggett was glued to the computer every night. Creating fun little games was just the beginning.

“I became totally obsessed with programming,” Baggett explained. “I learned BASIC first, then little games and I taught myself C. When I was nine, my mom paid me $20—like you’d pay a kid to mow the lawn—to write a program that would take her input manuscript and output it double-spaced with a header and a footer and a page number on each page. The hilarious thing was that I had written in the manual, ‘If you need tech support, you can call this number,’ and it was our home phone.’”

Baggett wasn’t even a teenager, but he knew he wanted a career in computers. In 1988, he enrolled at the University of Maryland and was intrigued by the connection between computer science and linguistics.

“It was clear by my sophomore year that I was going to do something in computational linguistics, which really means trying to make machines use or interpret language like a human does,” Baggett said. “We have things in our daily lives that approximate this goal now, things like Siri. But back then it was much more primitive and far-fetched.”

There, Baggett and his friends faced two big challenges: create a character-based action game (essentially a third-person game like Nintendo’s Mario) and figure out how to make this new game three-dimensional, the next frontier for the industry.

“You may remember in the ’80s there were nice-looking games but they were all flat,” he explained. “So, there was a big opportunity to take the concepts that had done well in 2D and make them in 3D, which sounds easy, but there were a lot of issues.”

After nine months and much trial and error, Baggett and his colleagues unveiled Crash Bandicoot, a game featuring the crazy adventures of a quirky orange anthropomorphic hero named Crash. By lucky accident, Sony picked up the game for its new system, PlayStation, and the rest is history. Since its release in 1996, Crash Bandicoot has sold more than 7 million copies.

“The big determinant of how successful the game was was the fateful decision of Sony to essentially adopt the game as their own,” Baggett said. “I think we always knew there was a possibility that it could become a big important character in the long-term history and narrative of games, but we were also cognizant that you have to get really lucky for that to happen. Somehow it did.”

From games to planes—and another “lucky accident”

In 1998, Baggett moved on from video games to travel, as co-founder of ITA Software, a company on a mission to disrupt the travel planning space by changing the way travelers found flights online.

“If you remember what it was like trying to search for a plane ticket in 1998, you’d go on Travelocity, and it was a website, but not anything that looked like what we call a website now,” Baggett said. “The search was terrible.”

Over several years, Baggett and his partners grew their product from a basic prototype to a fast, interactive search engine that would find, sort and display flights so users could compare prices and schedules. Orbitz was their first big customer. Kayak and the airlines followed.

“The lucky accident with ITA was we knew going in that people would not be buying tickets by calling a human travel agent forever, but we had no idea how rapidly it was going to happen,” Baggett explained. “From the time we started ITA to the time we had a product ready for prime time, booking airline tickets went from 95% human travel agent to 5% human travel agent. Our product ran on PCs at a time when everything else was mainframe-based and that allowed us to really fulfill this need.”

Google liked the system so much they bought it. The multi-million-dollar purchase of ITA in 2010 was Google’s tenth-largest acquisition ever.

That set the stage for Baggett’s current venture, INKY Technology.

“I really didn’t want to work for a giant mega-corporation, I wanted to do something smaller,” Baggett said. “I looked at a few options and I was intrigued by the email space. Email’s not that great and there are tons of security issues.”

After several years of pursuing a variety of ideas, Baggett launched INKY’s flagship cybersecurity product Phish Fence in 2018. The software blocks unwanted email intruders, notifying customers via email and educating them along the way.

“Generally, if we’re sure something’s malicious, we’ll just send that to the quarantine and the user will never see it,” Baggett explained. “But if it’s in the category of, ‘Woah, this looks kind of shady’ or, ‘Uh-oh, this looks like a totally legitimate email but it’s asking this guy to pay an invoice,’ that’s when we say, ‘Let’s remind this user you need to be aware and confirm outside of email before you pay.’ We’re essentially analyzing the real mail that businesses receive and turning the ones that we want to call attention to into teachable moments.”

“Early on we got a lot of feedback like, ‘You can’t call it that, there’s no way a bank’s going to buy anything called INKY with an octopus character that looks like a cartoon,’” Baggett recalled. “And one of the things I’m proud about is I just said, ‘Nope, I don’t believe that, we’re doing it.’”

Now, with more than a thousand partner companies, INKY has become an important player in the email security market, gaining recognition for its next-generation email security software—and its quirky cephalopod mascot.

In the nearly 30 years since he graduated, Baggett never lost his connection with UMD. He serves on the College of Computer, Mathematical, and Natural Sciences’ Board of Visitors and the Computer Science Advisory Board, and he previously served on the University of Maryland College Park Foundation’s Board of Trustees.

The feeling is mutual. He was named a distinguished alumnus of the department in 2003 and holds a place in the department’s Alumni Hall of Fame—which includes the perk of being featured prominently in the lobby of the Computer Science Instructional Center. Now, with a son enrolled at Maryland as an undergrad, Baggett sees his success from a new perspective.

“What’s really funny is now my son is a student at Maryland and one of his friends was in the computer science building recently and said, ‘Hey, I saw your dad’s picture on the wall,’ and that was really crazy,” Baggett reflected. “I don’t think anybody like me does stuff to be on a wall like that, but it’s pretty darn cool when it happens.”