From CS to HBO 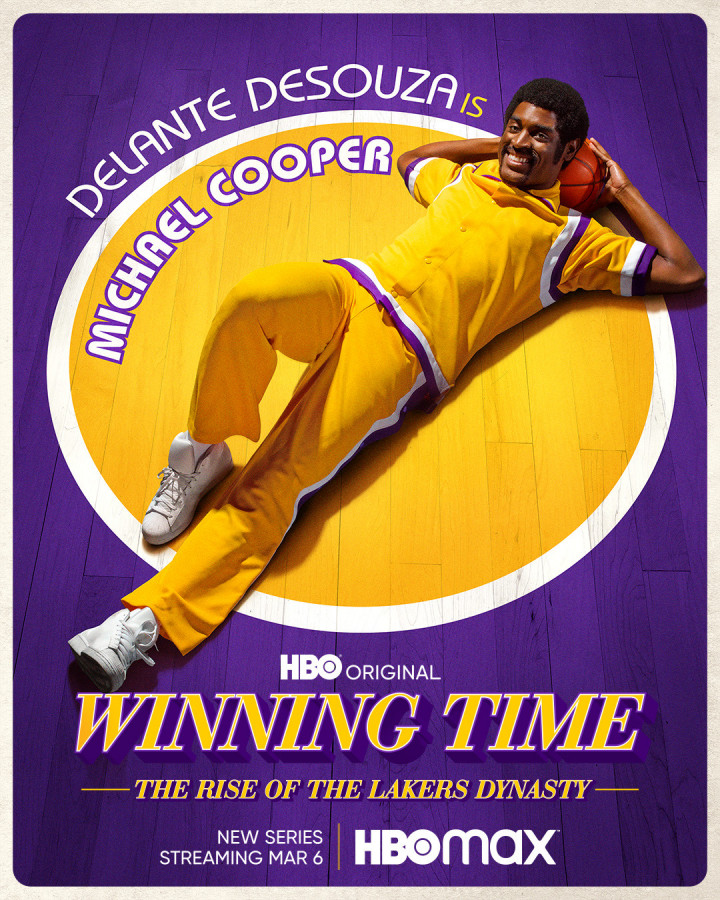 Delante Desouza (B.S. ’16, computer science) can still hardly believe he made the jump from digital marketing specialist to a starring role in the new HBO series about the Los Angeles Lakers.

“It almost doesn’t still feel real to me, and I know that’s crazy to say after two years on this project,” Desouza said. “It just feels like I’m that same kid who was in CMSC 131 walking to class at UMD.”

Desouza—who pursued acting as a hobby during his years at Maryland—plays legendary shooting guard Michael Cooper in Winning Time: The Rise of the Lakers Dynasty. The 10-episode series chronicling the meteoric rise of the Lakers in the 1980s premieres March 6, 2022, on HBO and HBO Max streaming service.

“We could be twins in another life”

For Desouza, this very unexpected turn of events began in 2019 when he was doing digital marketing for a Baltimore real estate company. Still interested in acting, he was scrolling through a website called Actors Access when an ad caught his attention.

“I saw this posting that said they were looking for a guy 6 feet or taller who plays basketball and looks like this real-life person, Michael Cooper,” Desouza recalled. “I looked at the picture and I was like, ‘Wow, he and I look pretty similar, we could be twins in another life.’”

Just for fun, Desouza responded with his headshot, thinking it was probably some kind of scam. But days later—to his amazement—the casting director for the Lakers series contacted him with an audition request. This time, Desouza went all in.

“I cut my hair like Michael Cooper, I did my mustache as his, and I filmed it. I also sent a video of me shooting some hoops,” he said. “Then within a couple of weeks, the casting director emailed me back and said, ‘Adam McKay wants to meet with you.’ And if you know anything about Adam McKay—if you’ve seen his stuff like The Big Short, Step Brothers, and the latest one, Don’t Look Up—you know he’s just a legend in the industry.”

After a series of auditions, Desouza was tapped to play the role of Cooper and things moved quickly from there. He joined an impressive cast including familiar names like John C. Reilly, Adrien Brody, Rob Morgan, and Sally Field and soon found himself caught up in the whirlwind of a major Hollywood production.

“We shot the pilot in 2019 before COVID hit and the set was massive—all these people running around and Adam’s directing from a microphone,” Desouza recalled. “And when they said ‘Lights, camera, action,’ that’s when everything just kind of hit all at once.”

The series follows now-legendary Lakers players like Earvin “Magic” Johnson and Kareem Abdul Jabbar and their rise to NBA stardom. Desouza’s character Cooper is a rookie, coming back from a serious knee injury and fighting to prove his value to the team. Desouza pulled from his own experiences to play the part.

“Me and Michael Cooper aren’t that different personality-wise,” he observed. “There were some things I had to learn for the character, like mannerisms and how to be a half-foot taller than I am. But when it comes to personality, the essence and energy of the character, I took that from my own life and put it in the character and it worked beautifully.”

For more than a year, Desouza and his on-camera Lakers teammates trained for their roles, on and off the court.

“Once the COVID shutdown happened, things got delayed so we had extra time to prepare,” he explained. “We were on our diets and training regimens, and we worked hard to learn the Lakers’ plays and how they moved on the court as basketball players.”

“My first day, I was so nervous I thought I was having a nervous breakdown on the set,” he said. “Right before they said ‘Action’ I was reciting my lines in my head again and again and again so I wouldn’t forget them, but by the third or fourth take I was a lot better.”

Desouza appears in the pilot for the Lakers series and seven of the 10 episodes. Though this was his first on-screen role, he quickly settled into the daily production routine and realized that acting would never be just a hobby again.

“It was episode five or six, I was on the set prepping for my scene and I thought, ‘Wow, this is the happiest I’ve ever been in my life,’” Desouza recalled. “That just locked everything in for me, all the questions went away, like ‘Am I good enough? Can I make it?’ All that just went out the window; I was like ‘This is where I’m supposed to be.’”

Crazy about games, curious about technology

Growing up on the west side of Baltimore, Desouza was the youngest of four kids and crazy about video games from the time he was little. When he was 13, his cousin introduced him to acting.

“When my cousin started acting, I didn’t even know what acting was, to be honest. I certainly didn’t know that was a thing you could make a living off of,” Desouza recalled. “Then when I went to the theater and saw his play, that’s when I said, ‘This looks fun, I want to try it.’”

He performed with Baltimore’s Arena Players community theater for a few years in high school, but his interest in video games and tech eventually pushed him back toward computers.

“In high school at Baltimore Polytechnic Institute, I learned how circuits work and my brain was always curious about technology,” Desouza explained. “When I combined that with the fact that I spent most of my time on the computer doing video games it just seemed like a no-brainer.”

In 2012, Desouza enrolled at the University of Maryland and found himself inspired—and a little intimidated—by the academic challenges of computer science.

“When I first got into Maryland it was a struggle because I’d studied algebra and pre-calculus in high school, but I’d never done coding,” he recalled. “When I opened my mind to learning how to program and what software development was, it shifted my way of thinking into how can I take this problem, break it down to its simplest components,and build it into a solution. The academic challenges forced me to learn how to learn.”

Chosen for the Quality Enhancement Systems and Teams (QUEST) honors program at UMD, Desouza worked toward his degree in computer science while still pursuing his acting hobby with the Kreativity Diversity Troupe, an all-inclusive student performing group.

After graduation, he worked in UMD’s Division of Information Technology before moving on to a digital marketing job at a Baltimore real estate company. Years later, he realizes his experiences as a student at Maryland made a life-changing difference.

“I think the beautiful thing about Maryland is there are so many different student organizations pursuing such great causes, you always felt like you had a home somewhere whether you were part of the Black Engineers Society or you were in one of the a cappella groups,” Desouza said. “There were so many places for you to call home as a student that you never really felt alone. That’s when I learned to ask myself the questions, ‘Who am I? What do I stand for?’ and start to build off of that.”

The sky’s the limit

Now, with his first major TV role under his belt, Desouza’s future as an actor is coming into focus. He moved to Los Angeles and looks forward to his next big role.

“There’s nothing I can talk about yet, but what I will say is this is not the last time you’ll see me. 2022 is going to be a very exciting year,” Desouza said. “I’ve always wanted to do a Marvel movie and play a superhero, that’s my childhood fantasy, but what I’m looking forward to is doing a project that starts a conversation and gets people talking and thinking differently. That’s ultimately what I want to do with my acting. “

But first, he has a series to watch—his own.

“A lot of this Lakers series I haven’t even personally seen yet,” Desouza explained. “I have an idea of what happens, but sometimes when I read a script I only look for my scenes so I don’t spoil it for myself later on. So, yeah, I’m going to be watching it at the same time you guys are.”

Three years ago, Desouza would have never believed a UMD computer science alum could flip the script and make it as an actor in Hollywood. But now, thanks to a big break—and a strong foundation from UMD—the sky’s the limit.

“I might not have been in the top 10 in my class at Maryland, but I think it’s about knowing what you want to do and going for it full-stop,” Desouza reflected. “I got so many valuable tools from CMNS, and UMD in general, I know I wouldn’t be where I am today without the experiences I had at Maryland.”