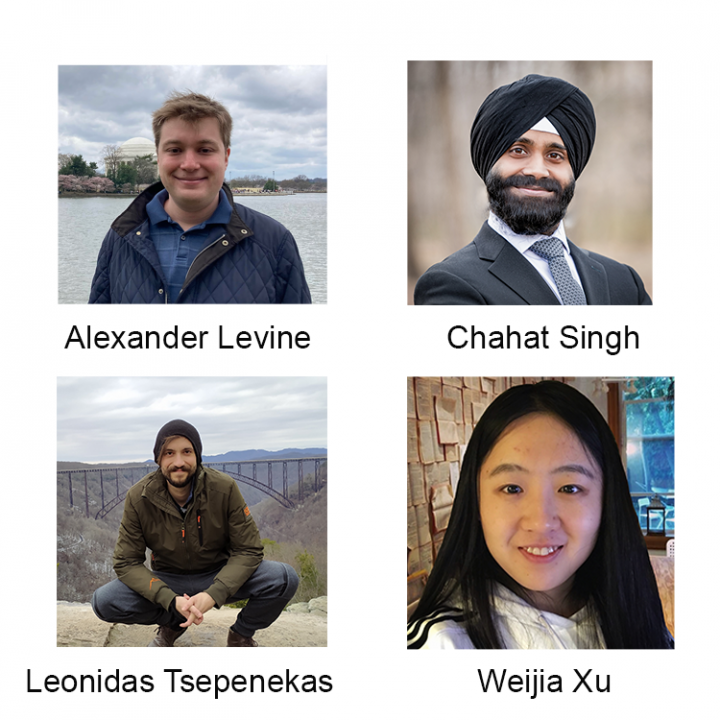 Levine, a graduate of Brown University who double majored in physics and computer Science, worked as a software engineer before joining UMD in 2018. His research interests center on robust machine learning, with a particular focus on providing provable guarantees on the performance of deep neural networks on adversarially distorted inputs.

“By providing robustness guarantees for machine learning systems, we can allow these systems to be used more confidently in safety-critical applications,” Levine said.

Levine is advised by Soheil Feizi, an assistant professor of computer science with a joint appointment in the University of Maryland Institute for Advanced Computer Studies (UMIACS).

“Alex has derived some fundamental results in the area of robust learning, establishing state of the art in several important problems,” Feizi said. “He has been a star student in our department and I am happy that he is getting this very well-deserved fellowship."

Singh began his Ph.D. in 2018 after earning his master’s of engineering degree in robotics from UMD. His research interests focus on bio-inspired minimalist cognitive architectures for mobile robot autonomy.

“In my current research, we draw inspiration from nature and build a minimalist cognitive framework for robots at scales that were never thought possible before,” Singh said. “Because time is critical when it comes to saving lives, efficiency in mobile robots becomes crucial for such rescue operations.”

Singh ultimately plans to develop a formalism for minimalist architecture for different mobile robots based on their requirements in different environments and situations.

Singh is advised by Yiannis Aloimonos, a professor of computer science with a joint appointment in UMIACS.

“I was thrilled to hear that Chahat's work on interactive perception was recognized by the prestigious Ann Wylie Fellowship,” Aloimonos said. “Chahat has coined the term passive computation. He designs 3D-printed structures that utilize passive components for modulation of input signal without any requiring additional electrical power. This in turn simplifies the perception problem at higher cognitive levels.”

Recently, Singh discovered for the first time that one can use vertical pupils (like the predators in nature) on an event camera to tone down irrelevant events, which in turn save about 100x power at the hardware level to achieve fast autonomous flight. He is currently working toward a 20 m/s autonomous drone (flying in the forest) using only a single event camera.

Tsepenekas is an electrical and computer engineering graduate of National Technical University of Athens in Greece. His research focuses on developing algorithms with provable theoretical guarantees for a variety of significant real-life problems, such as facility location, clustering and computational epidemiology problems.

Tsepenekas is advised by Aravind Srinivasan, a Distinguished University Professor of Computer Science with a joint appointment in UMIACS.

“Leo has been doing cutting-edge research in clustering, fairness, algorithmic combinatorial optimization, computational epidemiology and related areas,” Srinivasan said. “I expect him to write an outstanding Ph.D. thesis based on his prolific research.”

A graduate of the University of Science and Technology of China, Xu’s research focuses on combining the power of deep neural models with human knowledge as inductive biases to build more data-efficient, controllable and robust machine translation models. She plans to further her research on inspecting and reducing hallucination errors in machine translation.

“Hallucination errors range from cases where the model output is completely detached from the source to more localized faithfulness issues that can nevertheless lead to severe misunderstandings,” Xu said. “I would like to study how hallucination errors are made by inspecting a few internal model signals in neural machine translation models and to what degree the model signals uncovered can help detect hallucinations and can support mitigation strategies.”

Xu is advised by Marine Carpuat, an associate professor of computer science with a joint appointment in UMIACS.

“In her Ph.D. research, Weijia has addressed fundamental machine learning bottlenecks that prevent machine translation from fulfilling its promise to help people communicate across languages,” Carpuat said. “To wrap up her dissertation, she has decided to address one of the most critical open problems in neural machine translation: how to detect and prevent the kinds of errors that can mislead people into misunderstanding the meaning of the source language content. This is very challenging because these errors can be elusive in state-of-the-art systems, but Weijia has found a promising angle of attack to discover their root causes. I am thrilled that Weijia received this well-deserved recognition, and I look forward to seeing what she will do next.”