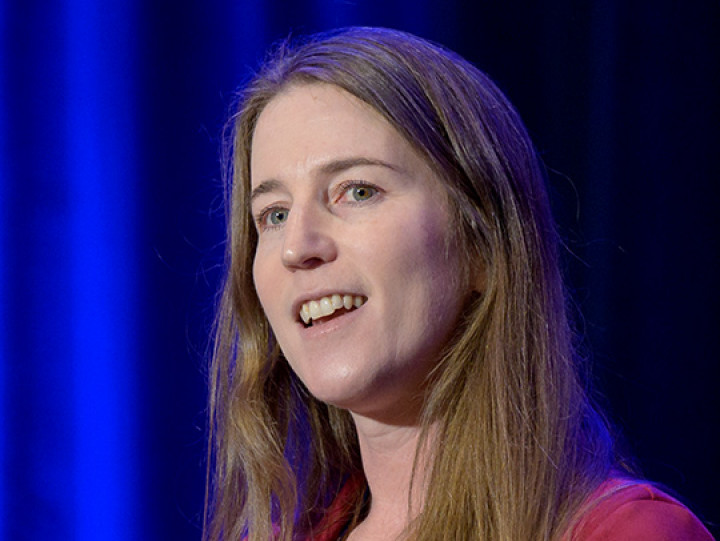 In January 2022, Katherine Calvin (B.S. ’03, mathematics; B.S. ’03, computer science) was named NASA chief scientist and senior climate advisor, tasked with advancing NASA’s entire science portfolio, and climate science in particular, in the years to come. Before taking on this new role at NASA, Calvin spent 14 years as an Earth scientist at the Joint Global Change Research Institute, a partnership between the Pacific Northwest National Laboratory and the University of Maryland, exploring and analyzing the relationships between human and Earth systems in the context of global climate change. During her time there, she also worked on the Department of Energy’s Energy Exascale Earth System Model, which is used to analyze the past, present and future state of the Earth system. Calvin has co-authored more than 100 publications.

In a recent interview, Calvin shared her favorite memories from her days at UMD and her thoughts on her new role at NASA and the challenges ahead. This interview has been edited for length and clarity.

Tell us about your new position at NASA as chief scientist and senior climate advisor—how did it come about and what are your responsibilities?

NASA has had a chief scientist position for many years and created the position of senior climate advisor in early 2021. The agency combined those two roles and I started serving in this position in January of 2022. NASA’s climate research spans the agency and includes observations, models, applied science and technology development. As senior climate advisor, my job is to help connect climate research within NASA and communicate that research externally to other agencies, international partners, and the public. As chief scientist, my job is to communicate and advance NASA science more broadly.

What are the biggest challenges you face in this position?

NASA has a lot of exciting science missions. I am fortunate that I get to talk about these every day, but it is really the work of a lot of fantastic scientists. I want to make sure people recognize the scientists behind the research in addition to the science itself.

Why is it so important for NASA to go all in on addressing climate change now?

We know from observations made on and above the Earth’s surface that the planet’s climate is changing. 2021 was tied for the 6th warmest year on record. And collectively, the past eight years have been the warmest since modern record keeping began. Along with increases in temperature, we’re experiencing other changes in the Earth system, including declines in Arctic sea ice, increases in sea level, more heavy precipitation events, more heatwaves and more wildfires. We know from science that many of those impacts will increase with more warming. NASA’s Earth observations, models and applied science tools can help us better understand and respond to climate change.

Do you have personal goals or specific ways you’d like to make your mark in this role?

I want to make sure people know NASA science and NASA scientists. People often know about the planetary science and astrophysics at NASA. NASA is also a world leader in climate and Earth science. I want to amplify all that we do across the entire science portfolio. The people doing the research and developing the technologies are what make NASA so great—and I want to make sure people know about them, too.

How important is it to you to be on the cutting edge of addressing climate change?

We know from research done at NASA and elsewhere around the world that the climate is changing, and those changes have impacts on our daily lives. It is important to me that people have the information they need to make informed decisions. That is one of the things that really excites me about being at NASA—NASA has experience explaining complex science and is committed to open science, both of which are critical to informing decisions.

How excited are you to be in this place at this time?

I have always admired NASA—its inspirational missions and amazing science. NASA shows us what happens when you bring together a team of really smart people to explore the universe and solve problems. I’m excited to be a part of that. And we have a lot of exciting missions coming up in 2022. We’re launching several Earth science missions that will help us better understand tropical cyclones, mineral dust, rivers and oceans. We’re expecting the first science images from the James Webb Space Telescope this summer, which will let us look back 13.5 billion years to see galaxies formed in the early universe. And we’re launching Artemis I—the first in a series of missions to explore the moon in preparation for missions to Mars.

How have your previous positions as a scientist prepared you for this opportunity?

My research has focused on understanding how the Earth and human systems might change in the future, including developing scenarios of future climate and quantifying the effects of climate change. It spanned the range of climate science, climate impacts and mitigation. This type of research required me to learn to work across disciplines and talk to scientists with very different backgrounds than I have. I worked with physicists, hydrologists, economists, ecologists, engineers and many others. That experience helped prepare me for my role as chief scientist, where I get to interact with people across NASA’s science portfolio, including astrophysicists, planetary scientists, astrobiologists and many more.

Your educational background is in mathematics and computer science—how do you apply that expertise to the work you’re doing at NASA?

You earned your bachelor’s degrees at the University of Maryland—how pivotal were those years in shaping your path for the future?

The math and computer science classes I took at UMD were the foundation for the research I have done since. I also worked part time for the Department of Energy while at UMD, where I worked on energy modeling. That was my first introduction to mathematical modeling, and it led me to pursue graduate school in management science and engineering.

Tell me about your time at Maryland—what are your favorite memories?

My favorite memories from UMD were related to sports and people. I went to almost every home game for both football and basketball while at Maryland. And I had a great group of friends that I met in the dorms or in classes. Those games and people made a big school feel like a community to me. I’m still friends with the people I met at Maryland.

What was the most important thing you learned in your years at UMD?

I was part of the Gemstone program while I was at UMD. In that program, we formed interdisciplinary teams to research real-world problems. It was my first real exposure to interdisciplinary work. The people on my team had a variety of majors and learning to communicate and work with them was one of the most important things I learned at UMD.

How did your academic experiences before college steer you toward mathematics and computer science and UMD?

I am originally from Maryland. In high school, I wasn’t sure what I wanted to be when I grew up or even what the options were. I knew I liked math, so I declared it as a major. I had taken one computer science class in high school but didn’t add it as a second major until I got to UMD.

I started researching climate change in grad school. I have always spent a lot of time outdoors hiking, camping, biking and boating. By spending a lot of time outside, I developed a deep appreciation for nature and an awareness of weather. Climate change was an opportunity for me to bring together my technical skills with something that mattered to me.

Is there anything that people might be surprised to learn about you?

I’ve climbed Mount Kilimanjaro. It was a really great experience to spend several days hiking there. The views were spectacular, particularly once we got above the clouds. And we got to walk through and see several different ecosystems along the way.

Do you have a mission in your life or a particular way you want to make a difference?

It is important to me that people have the information and resources they need to make informed decisions. We know the planet’s climate is changing and this has impacts on our daily lives. But we are at a point where we need to go beyond collecting data and move towards making sure it can be easily used. One of the big things we’re working on at NASA is data accessibility. We want to make sure people can take our data and use it when they are making decisions, whether those are about climate mitigation, adaptation or planning. That to me is important.

Looking back at your career so far, what are your thoughts about all you’ve accomplished up to this point?

At every step in my career, I’ve focused on learning all that I could and doing the best that I could. I didn’t know where it would lead, but I am very happy with where I am now. I have a fascinating job, where I get to work with a lot of amazing people. I learn new things every day and get to be a part of a team that is exploring the universe.