UMIACS’ Jack of All Technical Trades 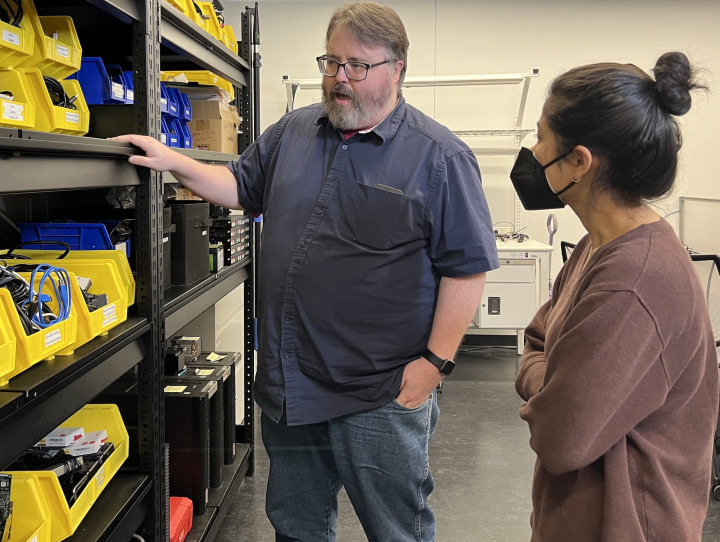 As the senior IT operations manager for the University of Maryland Institute of Advanced Computer Studies (UMIACS), Computer Science alumnus Edward “Joe” Ridge has multiple tasks to handle each day—from tough technical problems with supercomputers to fielding questions from student staff members who are learning on the job.

It’s a chaotic, yet choreographed, dance that Ridge has been doing for more than 25 years as he’s risen through the ranks of UMIACS’ technical staff.

“I’ve worn a lot of different hats in my time here,” he jokes.

Ridge started working for UMIACS in 1996 as a student during his first semester as a computer science major.

He now helps oversee a robust research computing infrastructure for the institute’s 76 faculty, 200-plus graduate students and two-dozen administrative and technical staff. This includes multiple high-performance GPU clusters, distributed-memory parallel systems, and more than 200 desktop workstations in three buildings on the UMD campus.

Currently assisting Ridge in his technical duties are six other full-time staff and almost 20 student workers at the UMIACS Help Desk.

Ridge recalls that when he was still a student and the UMIACS technical staff was less structured, he would often mentor junior students.

This led to his being hired full-time by UMIACS after he graduated in 2001. (He went on to receive a second undergraduate degree in mathematics in 2010).

One of Ridge’s first projects as a full-time employee was helping organize and formalize a process that has resulted in a continuous pipeline of student workers gaining experience at the UMIACS Help Desk. This included setting up a system where new student employees would work side-by-side with senior engineers on complex computing problems.

Derek Yarnell, director of computing facilities for UMIACS and Ridge’s supervisor, says he is proud to have witnessed the “extraordinary growth” of his colleague during the 25 years they have worked together.

“Joe’s wealth of institutional knowledge, coupled with a high level of domain expertise and problem solving, has led him to be one of the most important examples of how we enable our technical staff students to succeed in their careers,” Yarnell says.

Ridge says that several aspects of his job responsibilities have changed over the past decade. Many administrative processes—purchasing large GPU clusters through federal defense-related contracts, for example—have become more rigorous in terms of what is required from the university or the government funding agencies.

There’s also been a shift in recent years as faculty and staff do more tasks, including research, on tablets and smartphones versus desktop computers.

“Fortunately, we’ve had an eye on many of these things ahead of time, and it hasn’t been calamitous, but it certainly requires more deliberate actions and can slow previously simple things down,” Ridge says.

Looking back on his career, Ridge says he is most proud of the amazing student technical staff that he has helped build. He’s been directly involved in the hiring of more than 150 students in the past two decades, directly supervising more than 80 of these hires, with seven student workers subsequently going on to full-time careers at UMIACS.

“They’re all learning on the job, so working with them and fielding their questions definitely keeps me busy,” he says. “But it’s so great getting to work with them and see them progress and succeed.”

Aside from the students, Ridge says he is also appreciative of the overall camaraderie across the entire administrative and technical staff in UMIACS.

“If a procedure has a problem, we work to fix it. If a technical problem keeps happening, we work to engineer it out of our system,” he says. “We don’t hold each other to the impossible standard of perfection—if something goes wrong, we try to figure out why so that we can put guard rails in place to help avoid it in the future, embarking on improvements that we collectively believe will help move UMIACS forward.”