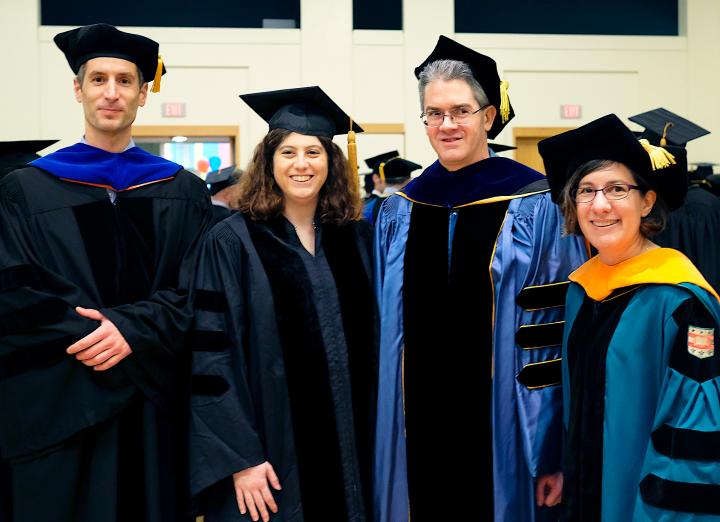 Michelle Mazurek, an associate professor of computer science and director of the Maryland Cybersecurity Center, has been honored by Carnegie Mellon University’s Security and Privacy Institute (CyLab) with its 2022 CyLab Distinguished Alumni Award.

The award recognizes CyLab alumni from any CMU department that have had impactful achievements in security and/or privacy.

After receiving notification of the award, Mazurek says that she was flattered.

“I wasn’t expecting this, and it means so much because of my immense respect for everyone at CyLab,” she says.

Mazurek was nominated for the CyLab honors by CMU faculty members Lujo Bauer—her former Ph.D. adviser—and Nicolas Christin. Their nomination specifically noted Mazurek’s excellence in usable security and privacy research as well as her professional leadership in the field.

“Michelle was a star Ph.D. student at CMU,” says Bauer. “Since becoming a professor, she has distinguished herself as a researcher, educator and leader.”

Mazurek earned her Ph.D. in 2014 from CMU’s Department of Electrical and Computer Engineering after completing her dissertation, “A Tag-Based, Logical Access-Control Framework for Personal File Sharing.” In the paper, she worked to find a balance between the ideal access control policy and what users are willing and able to manage.

Her human-centered research explores how users make decisions around security and privacy and the factors that lead to those choices. Through these efforts, she’s collaborated with industry partners to develop and improve secure solutions for application programming interfaces (APIs), is developing new access control models for IoT devices, and is currently working to debunk misleading VPN advertisements and understand how misinformation is affecting users' understanding of security and privacy.

“Most real-world problems in computer security and privacy are arguably caused by systems that don’t account for the needs or capabilities of the humans that build, use, or operate them,” says CMU’s Christin. “Michelle has been extremely successful as a researcher in this area and is easily on par with the best of her peers.”

One of Mazurek’s favorite things about being a professor is the opportunity to mentor students. She says the support she received in CyLab, particularly from her academic advisers Greg Ganger and Lujo Bauer—as well as the rest of the institute’s faculty—gave her the confidence to tackle challenging research topics and present her work in front of peers.

“I received such great support as a grad student. There was no end to the amount of time Lujo and Greg would take to read over my work and make sure I was on track,” Mazurek says.

She adds that she tries to do the same for her own students at UMD, providing as much feedback as possible, giving them confidence in their work and encouraging them to go out and talk about their research.

Mazurek is the recipient of several awards, including the DARPA Young Faculty Award and NSF’s CAREER Award. She is an author of more than 60 publications and has presented her work at some of the field’s most prestigious conferences and symposiums, such as the IEEE Symposium on Security & Privacy, the USENIX Security Symposium, and the ACM Conference on Human Factors in Computing Systems.

“I had the pleasure of collaborating with Michelle on several usable security projects when she was a Ph.D. student,'' says Lorrie Cranor, the current CyLab director. “I have been delighted to see her leadership in this field and to see what a great mentor she is for her own students.”

As part of the CyLab award, Mazurek has been invited to give a talk this December as part of CyLab’s seminar series.