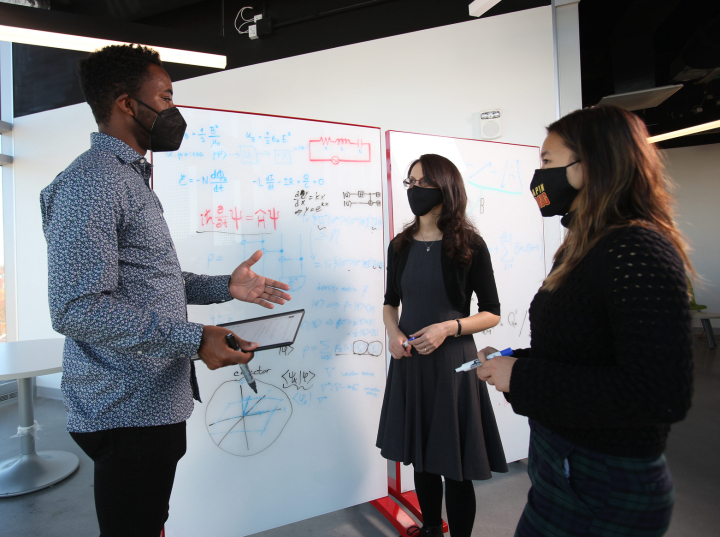 In 2021, when Jade LeSchack was a high school senior imagining herself at potential colleges, she was already entranced by physics—quantum physics in particular. After taking high school physics classes and an online course on quantum computing, she wanted to explore the world of physics more fully.

“I loved that in class we talked about a lot of different topics that were not just mechanics related,” LeSchack said. “We were talking about waves, quantum mechanics a little bit here and there, about sound and things like that. That's where I really found a love for physics. And then taking the Qubit by Qubit online Introduction to Quantum Computing course, that solidified it for me, because I realized you need physics for quantum computing. And I really wanted to dive deeper into physics.” 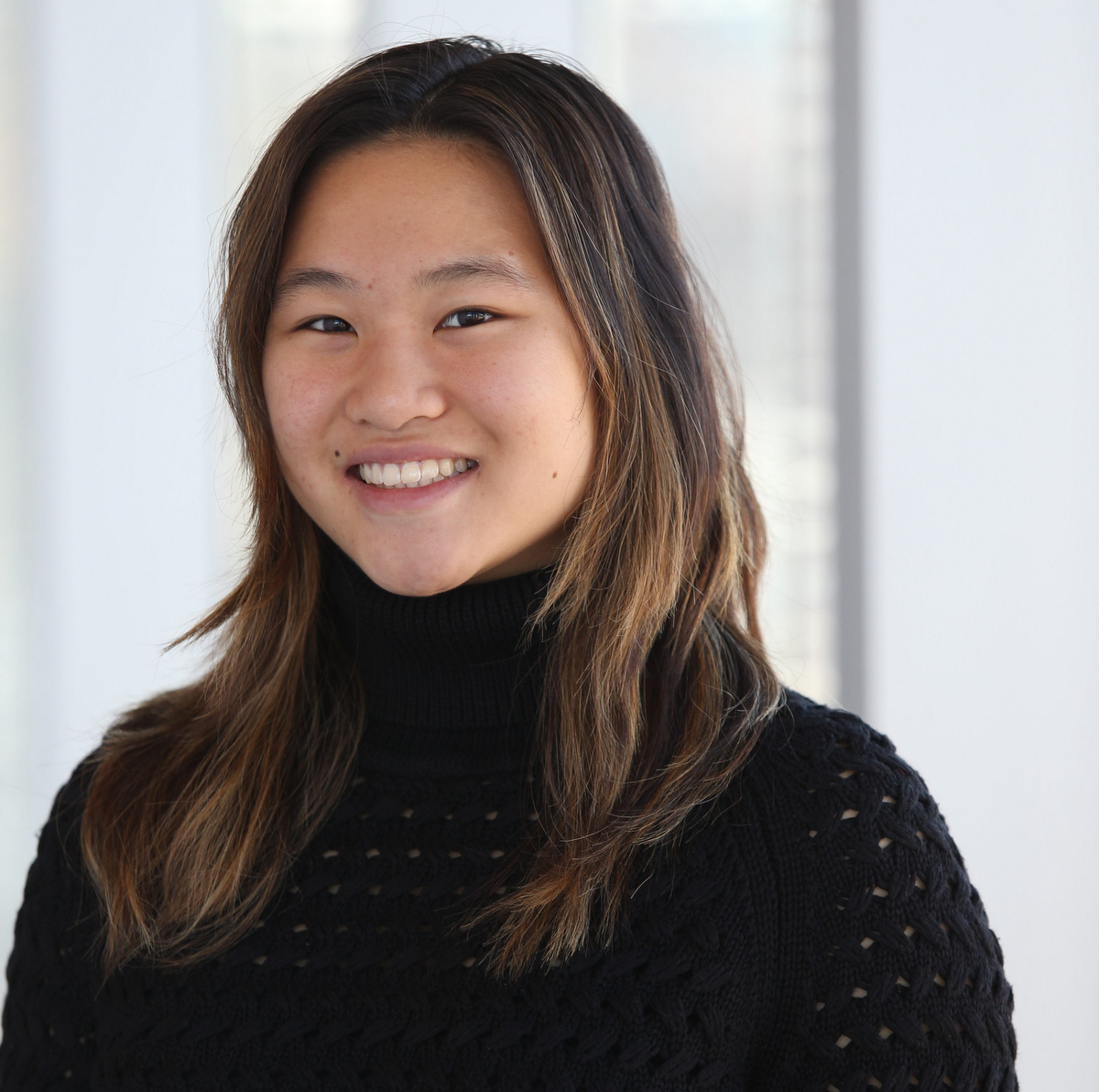 That desire attracted her to the University of Maryland’s flourishing and top-rated physics program, where an ambitious student can engage in basic research and learn how quantum physics is being harnessed in cutting-edge quantum technologies.

UMD encompasses eight centers and institutes dedicated to quantum research, is part of the Mid-Atlantic Quantum Alliance, and is home to the Quantum Startup Foundry. Last year, as a freshman physics major at UMD, LeSchack wasted no time before connecting with faculty, embracing the resources offered by the university and even creating new opportunities for herself and her fellow undergrads in the form of a quantum club.

While LeSchack was still investigating prospective colleges, she noticed Nicole Yunger Halpern, a quantum theorist and Fellow in the Joint Center for Quantum Information and Computer Science (QuICS) on the QuICS website. Yunger Halpern was moving to UMD and a position at NIST in the fall of 2021, the same time LeSchack would be starting if she decided to become a UMD student.

“I wanted to reach out to her to see what her experience has been like,” LeSchack said. “And what has her path been? I wanted to connect with another woman in STEM. And it was great to just talk with her. I had looked at all her research pages and some of the titles of the papers she published, and I was like, wow, I don't understand any of that. And she said, ‘But you will; you will soon.’ That was nice to hear.”

Yunger Halpern invited LeSchack to sit in on a group meeting to see what her research group was like, which developed into an ongoing arrangement throughout the year. Yunger Halpern provided additional mentorship as the year went on, like walking LeSchack through how she approaches reading an academic paper.

“I can best illustrate how self-driven Jade is by sharing that, before she even enrolled at UMD, she decided that she was going to specialize in quantum computing and I was going to be her advisor,” Yunger Halpern said. “One can scarcely stand in the way of such determination! Her passion for physics and leadership have been a delight to engage with throughout the past year.”

Once LeSchack decided that UMD was where she wanted to go and before her first semester had even started, she was looking for a way to contribute to the community. As a high school student, she had learned about undergraduate quantum clubs at universities like Stanford and MIT through hackathons—events where people gather to develop computer coding skills through workshops and challenges.

“I enjoy starting things, and then also using those things to teach people about the things that I'm interested in,” LeSchack said. “Since there were models that existed before, I wanted to take up the mantle of starting something at UMD because I thought a quantum club belongs here for the students and that there might be interest.”

She reached out to various people at UMD about her idea for an undergraduate quantum club. She eventually connected with Donna Hammer, the director of Student and Education Services in the Department of Physics, who suggested LeSchack present her vision for a club at the meeting for all the department’s students that happened on the first Wednesday of the semester.

“She said we need to start recruiting people, we need to see the interest and we should get started right away,” LeSchack said. “Donna has been really instrumental in helping sponsor the club and helping me get it off the ground.”

The result was the formation of the Undergraduate Quantum Association (UQA), which helps students learn about and engage with quantum science and technology by hosting events—including quantum hackathons, speaker events and lab tours. LeSchack’s goal is for the club to aid students from a variety of majors.

“I think that what's cool about what UQA can do is that it can pull people from all majors—not just physics—because quantum computing is an intersection between physics and computer science as well as math, and it has applications to even more than that, like bioengineering, chemistry and finance,” LeSchack said. “So those places where the applications are, are where UQA wants to help bring students that are not just physics majors in and say this new field is going to have applications to what you are already interested in, how can you incorporate quantum into what you're doing?”

In UQA’s first year, one of its main events was giving its members a firsthand look at quantum industry by touring IonQ. IonQ is the first publicly traded quantum computing company, and it grew out of UMD research projects and is based in the UMD Discovery District. The members of UQA got to see the company’s labs and quantum computer and meet with some of the staff.

UQA also participated in organizing the quantum track of the 36-hour Bitcamp hackathon put on by the university. The quantum track covered a broad range of quantum topics, including introducing qubits, the most fundamental pieces of quantum computers; using Qiskit, an open-source software development kit for working with quantum computers; and solving a programming challenge by using simulations to determine the ground state bond length of hydrogen molecules.

While getting UQA started, LeSchack also made time to get firsthand experience working in a lab. During the annual department research fair in October 2021, LeSchack met Patrick Banner, a UMD physics graduate student. Over the winter break she reached out to him about getting hands-on lab experience. She wanted to try lab work early so she could figure out what type of research she enjoyed and to ensure that she really understood what academic research is in practice.

She asked Banner about opportunities to contribute to research, and he helped arrange for her to work in the lab run by UMD Physics Adjunct Professor Trey Porto and UMD Physics Professor Steve Rolston, who is also chair of the Department of Physics. Under the guidance of Banner and Deniz Kurdak, another UMD physics graduate student, she worked on an electronics project. Besides developing practical skills working in the lab, she got to see how Porto’s experimental group had a different dynamic from Yunger Halpern’s theoretical group.

After a year of classes, research and lab work, LeSchack is still eager to learn more about physics and quantum computing. She said that UQA plans to arrange more events in the upcoming semesters and do additional lab tours, including possibly returning to IonQ. She also hopes the group will be able to collaborate with the Quantum Coalition—an intercollegiate group of undergraduate quantum computing clubs from several universities.

“I want to make UQA something that lasts longer than just the four years that I'm here,” LeSchack said. “So that starts with engaging all the incoming classes and building a structure that will last a long time.”

Students interested in learning more about UQA may reach out to LeSchack via her email leschack@umd.edu.