Cleaveland served as director of the Division of Computing and Communications Foundations for four years.
October 02, 2022 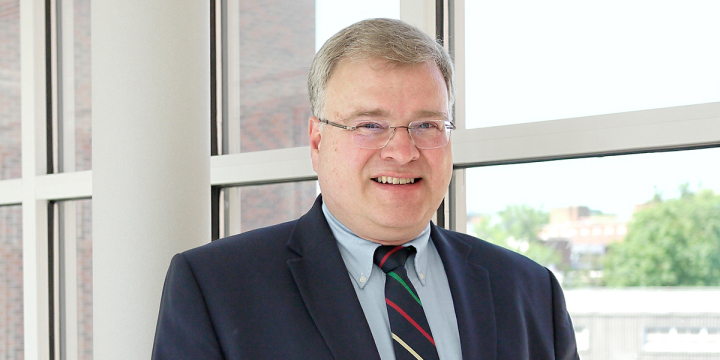 Rance Cleaveland spent the last four years as director of the National Science Foundation’s Division of Computing and Communications Foundations (CCF), one of four divisions under the Directorate for Computer and Information Science and Engineering (CISE).

What was your role at the NSF?

My responsibilities as CCF division director were pretty broad. I had the final sign-off on all the major funding decisions being made in my division. I controlled and oversaw the budget, which was approximately $200 million a year. I was also responsible for making sure that we were fully staffed on both the administrative and technical sides.

Some of my other responsibilities included seeding new programs and coordinating with other divisions across other NSF directorates to nurture programs of mutual interest. I also was responsible for interacting with groups outside of NSF, such as federal agencies and external funding organizations.

What part of your job did you enjoy the most?

For me, the most fulfilling part of the job was a sense of being on the frontlines and truly encouraging the fruitful development of computer science research policy.

Interestingly, NSF funds over 85% of all basic computer science research in this country. It’s unusual, since most other fields of science research have significantly lower proportions of funding originating from NSF. Fields like biology and chemistry also receive large amounts of funding from NSF, but they also have many other funding sources in the federal government, such as the NIH. However, the computer science discipline receives the most direct influence from NSF.

The programs that NSF comes up with, as well as the ideas that the organization seeks to stimulate interest in, have resonance across the whole country and whole field of computer science. It’s extremely gratifying and humbling to be part of that discussion and decision-making process.

What was one of the biggest challenges you had to overcome?  Did the pandemic affect the work being done at NSF?

It was a big change for me, especially moving from a professorial position to this role. There were more people, events and projects that you have to constantly engage with. My director role had more agency-wide responsibilities, such as serving on steering or advisory committees that often involve topics that you’re not necessarily an expert on. For example, one of the committees I served on was “Understanding the Rules of Life,” a biology-inspired topic.

You quickly realize that not being a professor in these other areas doesn’t stop you from being able to share ideas and insights. You can still participate meaningfully in conversations, especially when the topic is intended to be multidisciplinary.

In terms of COVID, it absolutely affected how we worked. The agency’s building was closed for almost two years, and we had to really hustle to adapt our work practices. There was exceptionally good planning done by the agency that I have to give credit to; right before COVID-19 hit, NSF made a big investment in Zoom. It wasn’t just buying the software, either. There were lots of training sessions, active helplines and people online who could sit down and help walk us through things.

This smooth transition to Zoom was what allowed us to work around what was typical of the organization before COVID, like panels meeting in-person to conduct peer reviews of proposals and make funding recommendations.

What was the most exciting or unexpected part of the job?

It was the cross-disciplinary and cross-governmental work that I did. I had the initial impression that I would be doing only computer science. But I was engaged in many different programs that involved people from biology, physics, mathematics, geology, and even the social and behavioral sciences.

I found that incredibly enjoyable, stimulating intellectually but also fulfilling and meaningful. You know your field, other people are experts in their fields, and we had to understand and discuss our respective fields with each other in order to identify new and important research directions. You really learn a lot from these cross-disciplinary or multidisciplinary collaborations and end up with a more well-rounded perspective than before.

Were there any particularly interesting research projects that you encountered during your term?

Because I came across so many impressive projects during my term, it’s hard for me to focus on a single project or field. If I must, I would have to say that I was personally intrigued by the interaction between biological sciences and computing.

I’m still particularly awestruck by the potential of biological computing, or the notion of using biological processes as the basis for computing rather than the more traditional tools that we’d usually think of, like chips and semiconductors. The field is still in its infancy for the most part and it’s not clear where it’ll head, but the idea is revolutionary. Biological computing has many implications for the world, including economically and environmentally.

What makes a good leader in the computer science community?

It sounds obvious but is not always obvious—one important requirement is simply being a good computer scientist.

I’ll also point out that computer science is increasingly cutting across all scientific, social science and even artistic fields. There are many interesting computing problems that don’t necessarily look like computing problems to begin with. For example, the Human Genome Project, which is still a hallmark of human history and achievement today, was one such problem. Its aim was to map and sequence the entire human genome, which sounds like a mostly biological goal. But computer science had a tremendous impact on the ability of the project to proceed as quickly as it did.

In short, if you want to be a good computer science leader, you need to know your own field but also be able to talk across disciplinary boundaries. Let other people in other disciplines tell you about problems in their fields and try to use that as a basis for understanding what you and your discipline may encounter.

What research areas of CCF do you believe will be increasingly ‘hot topics’ in the coming years?

There are a lot, but I will highlight a few. One involves the end of Moore’s Law, a conjecture made by Gordon Moore, co-founder of Intel. Decades ago, Moore first postulated that we would see massive technological improvements for years to come. It was a huge concept from the ’70s to the ’90s but is kind of tapering off now. In short, it’s the idea that computer hardware is evolving so fast nowadays that the things you can’t do now, you’ll be able to do in a year. Hardware engineers were improving hardware computing performance so exponentially that the everyday computing we take for granted today would have been complete science fiction a few decades ago, like smartphones.

But now, it seems like traditional hardware-based performance improvements are reaching the end of its steep upslope. There’s a newer approach that’s now developing; if we want to improve our current computing systems at the same breakneck pace, we have to look for solutions elsewhere.

Non-silicon-based computing platforms are emerging, like quantum and biocomputing. They’re very revolutionary ideas about how to compute things much faster with much less hardware or less energy. This growing idea pool is a tremendous source of future research topics and innovations that lead to better computing.

Another trend I anticipate is increased interaction between computing and social sciences. We already see the intersection between artificial intelligence (AI), computing and issues like bias, transparency and accountability—things that are important in legal, legislative and regulatory settings. For example, people are now testing AI in cars. Regulators need to know if the AI does what it’s supposed to do in the car. However, there’s still a gap between AI and their capabilities, and developers can’t just argue that they always do well or never catastrophically fail sometimes. There are new movements like accountable AI or explainable AI, which call for these new AI technologies to be made transparent so that people can have true insight into what the AI is doing.

What new skills or insight are you bringing back to UMD?

It’s difficult to quantify how much my perspective was enriched by the time I spent at NSF, but I believe that I now have deep insight into how the research policy decision-making takes place—not just in terms of written procedures and policies, but how things actually work. I’m now very familiar with how new programs are created and administered, how multidisciplinary programs operate, what technical priorities to be aware of in the future and even just how governmental bureaucracy works.

The network I developed at NSF is also something that I believe is an important resource I’m bringing back. Knowing how the NSF is structured and who to talk to when you have an idea and need feedback is all invaluable. I hope I can help people at UMD get the resources that they need for their research more efficiently.