Ben Shneiderman Awarded Honorary Doctorate from the University of Melbourne 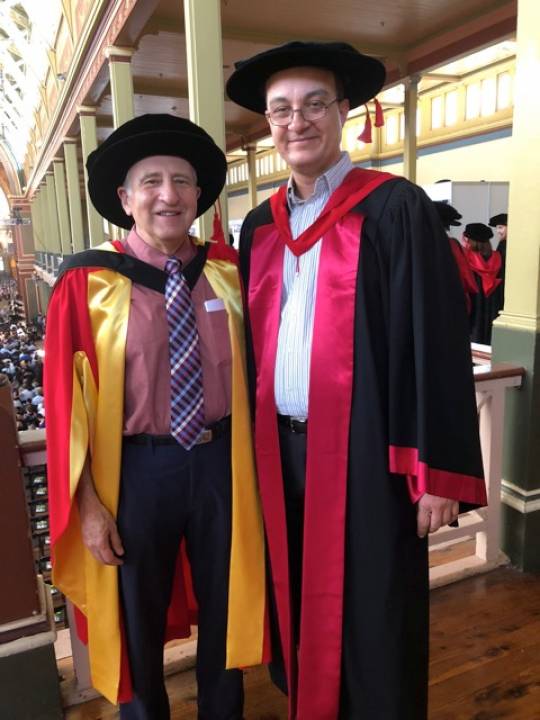 On December 13, 2017, Emeritus and Distinguished University Professor Ben Shneiderman was the recipient of prestigious Doctor of Engineering (Honoris Causa) from the University of Melbourne, “in honour of his significant impact in research and commercial applications in the fields of HCI and information visualization.”  His nomination was initiated by Egemen Tanin (PhD, ‘01) and Frank Vetere, both professors in computer science.

During his visit, Shneiderman gave an inspiring six-minute commencement address during an extremely warm day (95 degree Fahrenheit). The university also invited him to give a talk on The New ABCs of Research, the book on which campus leaders at Melbourne have based their Strategic Plan for 2025.  In addition to his talk, he toured the area and he participated in a two-day retreat with the computer science department there.

“I was impressed to learn about the strong research history of the University of Melbourne and see its impressive campus - rich traditions going back to 1855 and booming growth, which will ensure its position as the top Australian university and also #33 in the world rankings,” said Shneiderman.

Ben Shneiderman is a Distinguished Professor in the Department of Computer Science, Founding Director (1983–2000) of the Human-Computer Interaction Laboratory, and a Member of the UM Institute for Advanced Computer Studies (UMIACS) at the University of Maryland. He is a Fellow of the AAAS, ACM, IEEE, and NAI, and a Member of the National Academy of Engineering. He is recognised for his pioneering contributions to human-computer interaction and information visualisation, with specific contributions to the direct manipulation concept, clickable highlighted web-links, touchscreen keyboards, dynamic query sliders for Spotfire, development of treemaps and more. He has published several books, including Designing the User Interface: Strategies for Effective Human-Computer Interaction (co-authored with Catherine Plaisant) now in its 6th edition. His latest book is The New ABCs of Research: Achieving Breakthrough Collaborations (Oxford, April 2016).