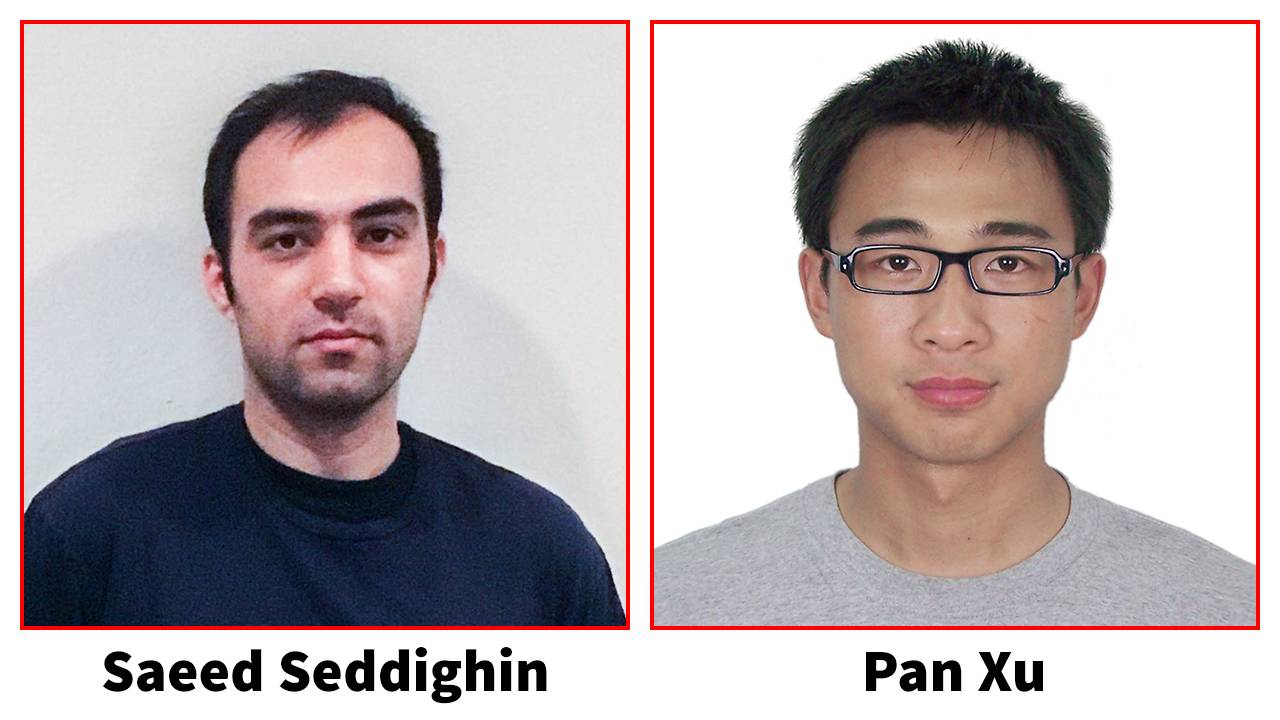 Saeed Seddighin and Pan Xu have been named the 2019 recipients of the Larry S. Davis Doctoral Dissertation Award.

This dissertation award recognizes the two most outstanding dissertations completed over the past year in the department.

Seddighin was recognized by this award for his work entitled  “Campaigning via LPS: Solving Blotto and Beyond."  The competition between the Republican and the Democrat nominees in the U.S presidential election is known as Colonel Blotto in game theory. The Colonel Blotto game and its extensions have been used in a wide range of applications from political campaigns (exemplified by the U.S presidential election) to marketing campaigns, from (innovative) technology competitions, to sports competitions. For almost a century, there have been persistent efforts for finding the optimal strategies of the Colonel Blotto game, however, it was left unanswered whether the optimal strategies are polynomially tractable. Seddighin’s work focuses on finding the optimal strategies that are polynomially tractable for the Blotto game.

Currently a postdoc at Harvard University hosted by Professor Michael Mitzenmacher and will join Toyota Technological Institute at Chicago as a Research Assistant Professor in Jan 2020. Seddighin is interested in approximation algorithms and algorithmic game theory.

Xu’s work work  entitled “Matching Algorithm Design in E-Commerce: Harnessing the Power of Machine Learning via Stochastic Optimization” focuses on finding the accurate estimates of the uncertainty in the Internet-based matching markets systems such as  Internet advertising (matching keywords and advertisers), ridesharing (pairing riders and drivers), crowdsourcing markets (assigning tasks to workers), online dating (pairing romantically attracted partners), etc. His dissertation aims to address the fundamental question of how to exploit estimates for our benefits as a matching-policy designer.

Xu is currently an Assistant Professor in the Department of Computer Science at New Jersey Institute of Technology.

Larry S. Davis is a Professor in the Department of Computer Science, and was Chair of the Department of Computer Science from 1999–2012 and Director of the University of Maryland Institute for Advanced Computer Studies from 1985–1994. He was named a Fellow of the IEEE in 1997. Prof. Davis is known for his research in computer vision and high performance computing. He has published over 100 papers in journals and 200 conference papers and has supervised over 35 Ph.D. students. He and his students have developed foundational methods for detection and tracking of people and vehicles in video, representation and recognition of human movements and activities, and mixed AI/signal processing models for event modeling and recognition.The award was established via generous donation to the department from Prof. Davis.

Selection
Dissertations will be evaluated based on technical depth, significance, potential impact, and presentation quality. The selection committee will consist of three faculty members selected by the department.  Up to two awards may be granted each year, and up to one honorable mention.