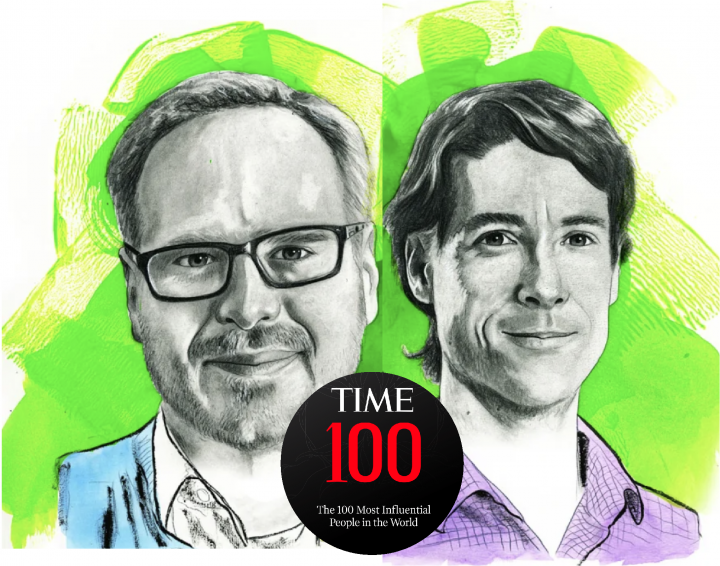 Two genomics experts who completed their doctoral training at the University of Maryland’s Center for Bioinformatics and Computational Biology (CBCB) were just named to TIME magazine’s annual list of 100 most influential people for their landmark work completing the sequencing of the human genome.

Michael Schatz, a Bloomberg Distinguished Professor of Computer Science and Biology at Johns Hopkins University (JHU), and Adam Phillippy, a bioinformatician at the National Human Genome Research Institute (NHGRI), were recognized for leading an international team in achieving the feat that scientists have been working toward for more than two decades.

Their team, the Telomere-to-Telomere (T2T) Consortium, used a mixture of new "long read" DNA sequencing technologies to map a gap-free sequence of the roughly three billion bases, or “letters,” in human DNA.

In making the announcement for TIME, Jennifer Doudna, a biochemist and winner of the 2020 Nobel Prize in Chemistry, explained that the team had uncovered the human genome’s “dark matter” that was missed by earlier sequencing.

“The complete human genome sequence is an invaluable resource that may provide new insights into the origin of diseases and how we can treat them,” Doudna wrote. “It also offers the most complete look yet at the genetic script underlying the very nature of who we are as human beings.”

The Human Genome Project announced it had finished decoding the basic chemical instructions for life in 2003, but skipped a significant section composed of highly repetitive sequences because they were mostly considered “junk DNA” at the time. Today, researchers know there’s more to it, which makes T2T’s work crucial.

Their findings were published earlier this year in the academic journal Science. Sergey Koren, another CBCB alum who completed his computer science Ph.D. in 2012, was a co-first author on the paper.

Phillippy and Schatz graduated with their Ph.D.s in computer science in 2010, working closely with their adviser Steven Salzberg. Now at JHU, Salzburg was CBCB’s founding director.

Schatz was co-advised by Mihai Pop, another genomics expert who is a professor of computer science and director of the University of Maryland Institute for Advanced Computer Studies.

“The success of the T2T project demonstrates the power of interdisciplinary science and represents the culmination of decades of advances in computational techniques for analyzing genomes, many of which were pioneered by Adam and Mike,” says Pop.

He adds that the pair fostered a collegial and collaborative environment in CBCB that still characterizes the center to this day, contributing to the success of many other outstanding scientists.

Looking forward, Schatz says he is excited about the possibilities of using their new genomic technology to improve many aspects of society, from agriculture to health care, and especially a better understanding of cancer.