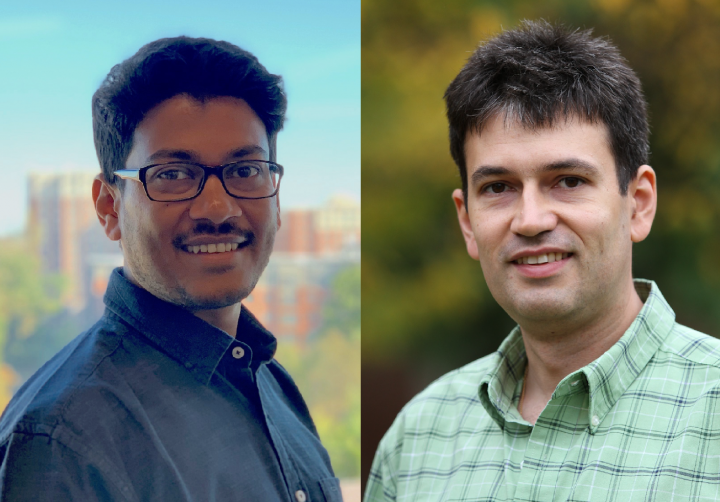 Two faculty members in the University of Maryland Institute for Advanced Computer Studies have each received an Amazon Research Award of $80K in research funding and $20K in Amazon Web Services promotional credits, totaling $100K.

Tudor Dumitraș (right in photo), an associate professor of electrical and computer engineering, will use the funding to continue his work measuring the effectiveness of malware detectors that employ machine learning. Pratap Tokekar, an associate professor of computer science, will continue developing algorithms to advance teams of autonomous robots.

Dumitraș says his project grew out of an award-winning paper, “When Malware Changed Its Mind: An Empirical Study of Variable Program Behaviors in the Real World.”

In that study, the researchers investigated how malware samples change their behavior when executed on different hosts or at different times. Drawing from a novel dataset of 7.6 million execution traces, recorded in 5.4 million real hosts across 113 countries, the study detailed the first large-scale analysis of behavior variability in the wild.

“Once we understood how the behavior of malware samples changes across executions, my students and I started thinking about how this problem might impact today’s malware detectors—particularly the ones that employ machine learning,” says Dumitraș, who is also a core faculty member in the Maryland Cybersecurity Center.

For the Amazon-funded work, his team will use their previous dataset to approach the question of how to adapt machine learning techniques to the security domain from first principles—the act of breaking a problem down to the fundamental parts and building up from there.

Ultimately, their goal is to develop generic tools and techniques that are relevant for security services that rely on machine learning.

Collaborating with Dumitraș on the project are Yigitcan Kaya, a fifth-year doctoral student in computer science; Octavian Suciu, a postdoctoral researcher in MC2; and several summer interns.

Unless they are operating in completely controlled environments—such as a lab—robots must deal with various sources of uncertainty in the air and on the ground, like inclement weather and other moving objects.

Tokekar and his team will develop risk-aware route planning and coordination algorithms that can reason in these uncertain conditions. The resulting algorithms will be evaluated rigorously through practical and long-term deployments of robots in natural, uncontrolled conditions.

“Amazon is a leader in deploying fleets of multi-robot systems in warehouses, and this problem has been a major focus of my group’s research recently,” Tokekar says. “It's a fundamental challenge that we need to address in order to bring robots outside of controlled conditions and into the wild.”