The award—the highest honor given by the SMA—recognizes stellar contributions of a technical and leadership nature made to solid, geometric or physical modeling and its applications.
July 25, 2022 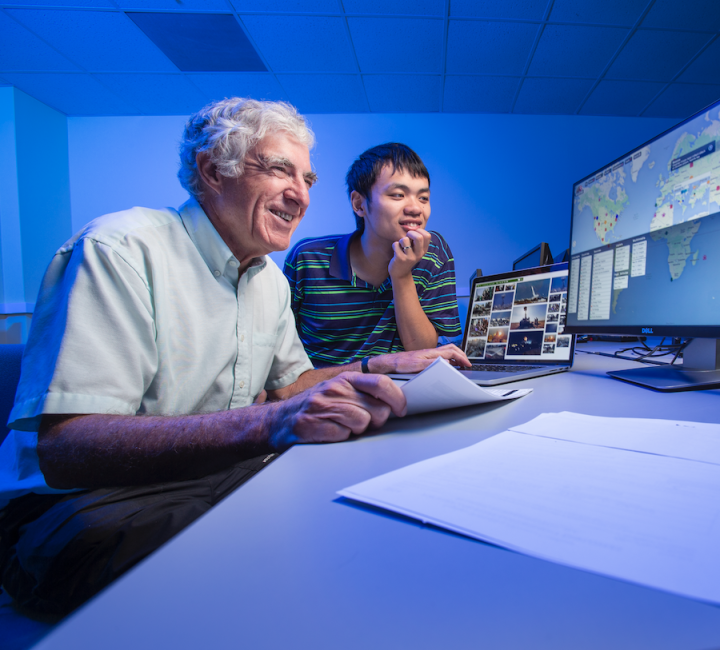 Hanan Samet (left in photo), a Distinguished University Professor of computer science with an appointment in the University of Maryland Institute for Advanced Computer Studies (UMIACS), has just been honored by the Solid Modeling Association (SMA) with its prestigious Bézier Award.

The award—the highest honor given by the SMA—is named for the late Pierre Bézier, a French engineer and one of the founders of the fields of solid, geometric and physical modeling. It is given to an individual or group for stellar contributions of a technical and leadership nature made to solid, geometric or physical modeling and its applications.

Samet was recognized by the SMA for his longstanding work involving quadtrees and other multidimensional spatial data structures for sorting spatial information.

Go here to read the full award text on the SMA site. In addition to receiving the Bézier Award, Samet was also named an SMA Fellow for 2022.

The SMA accolades are the latest recognition of Samet’s scientific and academic career. Other notable awards include the 2009 University Consortium for Geographic Information Science (UCGIS) Research Award, the 2011 Association for Computing Machinery’s (ACM) Paris Kanellakis Theory and Practice Award, and the 2014 IEEE W. Wallace McDowell Award.

In 2020, he was recognized with the Washington Academy of Sciences’ Distinguished Career in Computer Science Award and in 2021 he was conferred “Pioneer” status by the SMA.

He was the founding editor-in-chief of ACM Transactions on Spatial Algorithms and Systems, and the founding chair of ACM SIGSPATIAL. Samet is also a Fellow of the American Association for the Advancement of Science, the International Association for Pattern Recognition, ACM, IEEE and the UCGIS. He was inducted into the SIGGRAPH Academy in 2019.