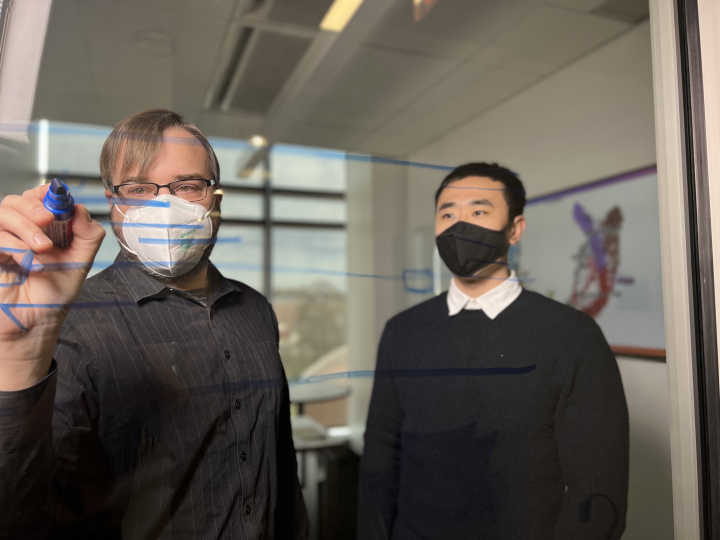 A University of Maryland expert on processing and organizing high-throughput genomics data has been awarded $350K from the Chan Zuckerberg Initiative (CZI), a philanthropic research organization launched in 2015 by Meta founder Mark Zuckerberg and his wife, Priscilla Chan.

Rob Patro (left in photo), an associate professor of computer science with an appointment in the University of Maryland Institute for Advanced Computer Studies, will use the CZI funding to improve upon a “constellation” of interrelated tools his lab has developed to process genomic data.

“A few of these tools have been broadly adopted within the genomics community,” Patro says. “This award will support our efforts to harden, modernize and expand the capabilities of these tools.”

By “harden,” Patro’s team aims to improve how the software is maintained and updated. They will accomplish this by creating suites of automated tests to ensure that new developments do not break existing tools in unexpected ways or introduce regressions.

In terms of modernizing, he says that a big part of the CZI project is converting certain tools from C++ to Rust, as the latter is a modern and “safe” programming language that makes developing and maintaining robust software much easier.

Finally, Patro says his team will add capabilities to these tools to process a wider range of data and handle different types of experiments.

“In addition to these goals, the grant also seeks to better document our core software components, both for users as well as for other developers, including scientists who can build off of our software,” he says. “Finally, there are diversity and outreach components, where we will seek to include in our developer community students and contributors from traditionally underrepresented groups.”

Patro, who is part of the Center for Bioinformatics and Computational Biology, says he appreciates the work CZI does as one of the few organizations that actively funds software.

“While most funding mechanisms support the development of tools as incidental artifacts arising from one’s research, they don’t generally provide support to build those tools out to an industrial scale, maintain or support them,” he says.

Patro’s winning proposal was one of 40 that were funded this year through CZI’s Essential Open-Source Software for Science program, which supports open-source software projects that are essential to biomedical research. Its goal is to support software maintenance, growth, development and community engagement for these critical tools.