Alum Peter Ersts creates software and solutions for the American Museum of Natural History’s Center for Biodiversity and Conservation
December 09, 2022 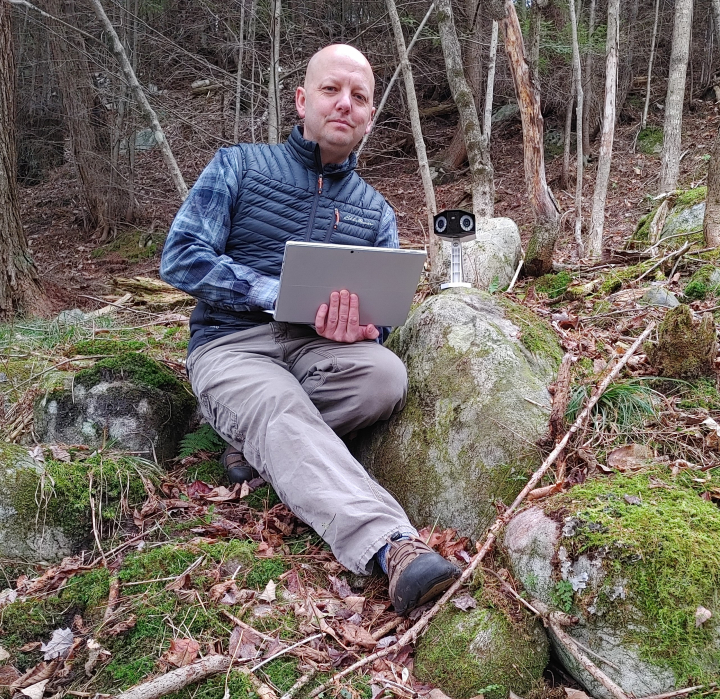 For Peter Ersts (B.S. ’97, computer science), working for the American Museum of Natural History’s Center for Biodiversity and Conservation (CBC) in New York City has meant some extraordinary opportunities and experiences—wild adventures that have taken him all over the world.

“One of my favorite places is Palmyra Atoll, which is way out in the middle of the Pacific,

and there we were doing sea turtle research, looking at green sea turtles, capturing them and tagging them and taking skin samples for genetic analysis,” Ersts explained. “My other favorite project was in Madagascar, and I was there leading whale and dolphin surveys, for humpback whales specifically.”

Surprisingly, Ersts isn’t a biologist or an ecologist, he’s a computer scientist. As a senior software developer for the CBC he’s spent the past 25 years creating specialized tools to support the center’s mission, from field research to education. The job is a perfect fit for Ersts, who has always been passionate about nature and conservation, although he admits it is a little unexpected.

“You might think, how does someone with a computer science degree end up spending lots of time chasing whales in a small boat, but it turns out that in this type of conservation work there are lots of places where you can apply technology,” Ersts said. “CBC is looking at questions like how many animals are there and where do they go, and we can help answer them.”

From location-specific digital mapping systems and specialized training programs to software that can count the number or penguins on an Antarctic ice shelf, Ersts uses his computer science skillset to advance the CBC’s efforts to protect and preserve our planet’s biodiversity.

From the woods to the computer

Ersts’ passion for nature and the outdoors goes all the way back to his childhood. As a boy growing up on Maryland’s eastern shore, he loved being outdoors.

“I was outside a lot,” he recalled. “I definitely spent a good portion of my childhood running around in the woods.”

And if Ersts was inside, chances are he was in front of a computer, playing video games in elementary school and then writing his own programs in high school.

“I really liked the creation component of programming, taking absolutely nothing and making something happen,” Ersts explained. “It’s not instant gratification, but it’s definitely a very creative process.”

Though he loved programming and computers, Ersts entered the University of Maryland as a marine biology major. By sophomore year, his plans changed.

“I was very interested in nature and the environment always,” Ersts noted. “But in those early biology classes it was a little hard to stay interested. It seemed so far into the future before I’d actually be doing anything that I decided to look at some other avenues and ended up in computer science in my second year.”

As he dug deeper into computer science, Ersts knew he found the right path.

“I remember my computer science courses being very independent. We were given an example in one language and told to implement it in another,” he recalled. “It was definitely not a hand-holding experience, like this is how you program. It was more like, this is how you think about creating a program and creating an algorithm and solving a problem, and I loved that.”

A purple kayak and a white Bronco

When he wasn’t in class, Ersts spent endless hours whitewater kayaking on the Potomac. His love of the outdoors—and his purple kayak—attracted plenty of attention.

“I had a purple kayak and a white Bronco and I was definitely known,” he explained. “I’d go to class and I’d leave a little bit early so I could beat the rush hour, kayak all through rush hour, then get back to work on my classes.”

“It gave me a really good feeling because I felt I was starting to contribute something to the protection and understanding of Earth and our environment and I definitely felt a little bit of a calling,” he said. “What I really enjoyed was being able to apply technology to environmental questions.”

After graduation, Ersts stayed on the NASA project full time until 1998 when he joined the CBC, initially developing a Biodiversity Informatics Facility, then going on to lead data collection activities in locations around the world. He has taught workshops and contributed to published research on everything from humpback whales to climate change.

One of the challenges Ersts enjoys most is creating systems that simplify the day-to-day work biologists do in the field. Early on at the CBC he launched a digital imaging system that speeds up species identification.

“You can identify humpback whales by their fluke pattern; their colorization is like a fingerprint,” he explained. “If you took photographs on film, you’d have to spend hours manually looking through pictures to figure out which ones are which, but with digital cameras, we could actually start doing that in the field, then store it and database it.”

And when Ersts saw the way researchers were counting animals and plants—sometimes thousands of them—in a particular area, he realized technology could help there, too.

“The old way to count them, people would project an image onto a dry erase board, circle the animals, turn the projector off and then count the circles as they were erasing the board,” Ersts said. “I just thought we can do better than this.”

In 2019, Ersts created a purpose-driven piece of software called DotDotGoose, so named because it was built using test data from biologists who were counting Arctic geese. The software’s simple interface allows users to import images they want to analyze, place them into “classes” or categories, then digitally tally the dots by class, saving significant time and effort. Over the past three years, Ersts’ open-source DotDotGoose software has been used by dozens of research teams worldwide to count everything from fish to seals to seabirds.

Throughout Ersts’ career at CBC, a pattern keeps repeating itself: when biologists face a research question or challenge, he uses technology to solve it.

“I can’t even begin to think of how many lines of code I’ve written,” he reflected. “We’ve contributed to identifying species, looking at population sizes, modeling species distribution especially in light of climate change, and trying to monitor and predict how and where distributions are changing,” he explained. “We’re also using technology to bring people with different perspectives together to find conservation solutions.”

Ersts’ passion for the environment continues to be as personal as it is professional. Living and teleworking from his home in New York’s Adirondack Mountains reinforces that connection.

“It’s important because it keeps me really connected to the environment and reminds me on a daily basis that we live in this absolutely beautiful place,” Ersts explained. “And it brings me back to thinking, how can we protect this, how can we understand it?”

And for Ersts, being able to make a difference means everything.

“The short form of our mission is to transform knowledge into conservation action,” Ersts said. “I can’t necessarily point to too many things and say, ‘I did that completely on my own or I made this amazing change happen,’ but I definitely can point to how things I’ve created are contributing to answering big questions and filling in the big picture. And that’s very rewarding.”