From Tracking IEDs to Tackling Math and CS

How alum Thomas Geisler transitioned from the U.S. Army to the University of Maryland and a career as a software engineer
December 09, 2022 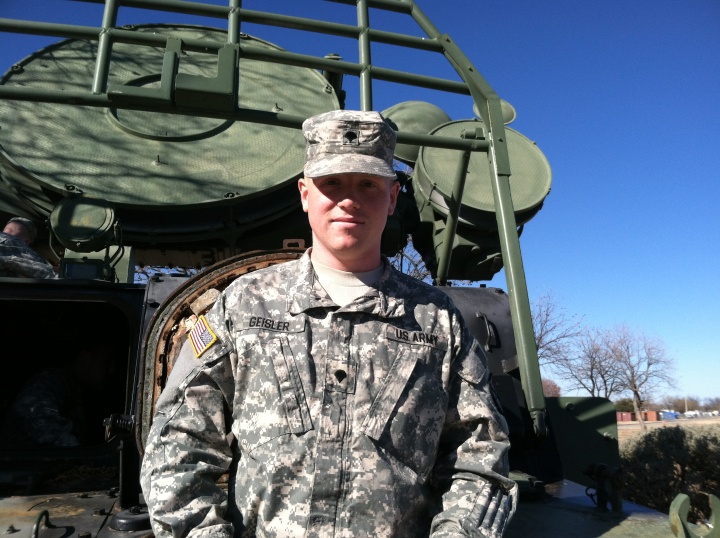 In 2013, when many of his friends from the Baltimore area were finishing college or starting their careers, Thomas Geisler found himself in a very different place: a combat zone. In Laghman Province, Afghanistan, even the weather was like nothing Geisler had ever experienced—and not in a good way.

“I was in such a dusty place in Afghanistan that when it rained the raindrops would collect dirt on the way down,” Geisler recalled. “I don’t know how many people can say that they’ve gotten caught in a mud rainstorm, but I have, and it’s not pleasant.”

Geisler (B.S. ’21, mathematics; B.S. ’21, computer science) served seven years as an intelligence analyst and Arabic translator in the U.S. Army, with assignments in the U.S., Afghanistan and Germany. Soon after he left the military, he enrolled at the University of Maryland, where he discovered a passion for mathematics and later, computer science.

Thanks to his UMD coursework and internships and his boundless interest in math, problem-solving and more, Geisler forged a career path that meshed his love for science with the intelligence experience he gained in the Army. Now he’s taking his skills to the next level as a software engineer at the Johns Hopkins University Applied Physics Laboratory (APL), a position he calls “ideal.”

“I love it. To be honest, I couldn’t ask for anything more,” Geisler said. “Because it has a lot of government contracting, it’s very rewarding and I feel like it’s a career where every day I feel like I make an impact.”

Geisler grew up in south Baltimore, Maryland. A quiet, introverted kid, he was always reading and relentlessly curious.

“I remember my parents getting frustrated with me taking things apart and putting them back together,” Geisler recalled. “I think I messed with a vacuum cleaner once that never quite got fixed. I was always interested in everything, always tinkering around.”

After high school, Geisler enrolled at Ohio State University, the first in his family to go to college. But once he got there, he had trouble finding his way.

“I was just completely lost, I didn’t know what I wanted to do,” Geisler recalled. “I must have changed majors four or five times, I was in business, and then economics and then I wanted to do languages, then I wanted to do social sciences. And believe it or not, the one thing that I never got into was hard science. The interest was there but I never really thought about doing it.”

After two frustrating years, Geisler decided it was time to change course. He started thinking seriously about joining the military.

“It seemed like an opportunity to step back and put a pause on big things like school and finding a career and reset my life,” he explained. “I was 13 when 9/11 happened and then in my teenage years, you couldn’t turn on the news without hearing about Iraq or Afghanistan. I had friends that enlisted, and it just seemed like something I could do beyond subtle patriotism.”

In 2009, Geisler came home from Ohio State for winter break and never went back.

“I was staying with my parents for Christmas,” he recalled. “And this may sound sort of fantastical, but I remember that it was the first thing that I told my parents Christmas morning. I said, ‘Hey, I’m joining the Army.’ There were two wars going on at the time.”

After basic training in Missouri, the Army sent Geisler to language school in California to learn Arabic, then on to Louisiana to build his analytical skills before he deployed to Afghanistan in 2013.

“It was scary, to be frank, but the anticipation of going there was harder to deal with than actually being there,” he said. “You don’t ever know what’s going to happen.”

“I was working the military intelligence mission while I was in Afghanistan,” Geisler explained.

“I was focusing a lot on IED networks, analyzing networks of people that were building and implanting and detonating explosive devices.”

In 2014, after nearly a year in Afghanistan, Geisler came back to the U.S. and then deployed to Germany as a signals intelligence analyst, using his Arabic language skills extensively and identifying threats to U.S. embassies, consulates and others.

Geisler completed his military service in 2017, and headed back home to Maryland to start a new chapter in his life. He applied to UMD, thinking he might major in engineering. But a few prerequisite courses later, everything changed.

“I started doing all the math classes and it just hit me—I realized this was the direction I wanted to go in,” Geisler recalled. “I walked over to the mathematics building and declared a math major.”

Geisler remembers reading book after book on the history of mathematics and the fundamentals of mathematical proof and spending hours picking professors’ brains about their research. Along the way, he developed a deep appreciation for the mechanics and the certainty of problem-solving.

“What I love about mathematics is that many problems can be solved in a variety of different ways,” he explained. “How someone solves a particular problem says a lot about their strengths and weaknesses, and no matter how a problem is solved, mathematics as an extension of formal logic prescribes a method of being absolutely certain that a solution is correct.”

While Geisler advanced his knowledge of math and later added a computer science major, he also volunteered with veterans groups on campus, grateful for the support they had given him.

“Coming back to school as a 27-year-old, I didn’t think I would fit in, but the veteran community at Maryland was awesome, they were absolutely instrumental in helping me acclimate,” Geisler said. “My time at UMD was very much the defining characteristic of this big transition from being in the Army to having a civilian career.”

As time went on, Geisler began to see how the analytical skills he learned in the Army could mesh with his new skill set in mathematical calculations and software development, and he thought APL might be a place where he could apply both. Two summer internships convinced him he was right.

“In my first internship at APL, I was doing a lot of background research for new contracts, then I got another internship the summer of ’21 and I was writing software for projects that were very important to the U.S. intelligence community,” Geisler explained. “In a way, it really mirrored everything I was doing when I was in the Army.”

By the time Geisler graduated in December 2021, he accepted a full-time opportunity as a software engineer at APL. Now he’s developing software for microcontroller and RF geolocation systems, applying the skills he learned at UMD every day.

“Calculus and number theory are essential to much of the work I do, and I use that and many things I learned at UMD on a daily basis,” Geisler said. “Mathematics isn't just about solving esoteric problems; it offers a method of understanding problems and assuring that a solution is grounded in facts and appropriate logical conclusion. At work I often find myself stopping to ask whether I've drawn a logical conclusion or if I've just been sloppy.”

Geisler has come a long way from that dusty combat zone in Afghanistan. Settled down with his wife in Sykesville, Maryland, he looks ahead to the challenges at APL and hopes to go to graduate school someday. And although he may not have taken the traditional path to get here, he’s exactly where he wants to be.

“Despite the fact that I never really had a clear plan starting out and I didn’t necessarily do things with a clear goal in mind, I couldn’t be happier with how it’s all worked out,” Geisler reflected. “I’m proud of my military service, I’m proud to have gone to UMD, I’m just really happy.”