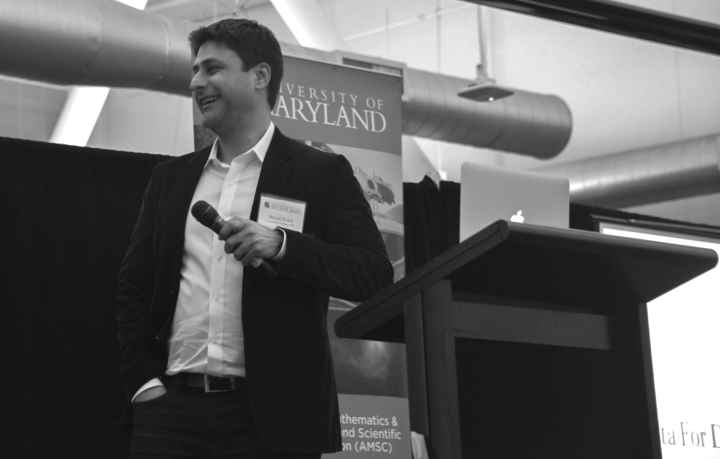 In March 2014, Shayan Zadeh (MS '02), took time from his very busy schedule as the CEO and co-founder of Zoosk to address an audience of Bay Area alumni, along with faculty, and staff at the Computer History Museum in Mountain View, CA. The College of Computer, Math, and Natural Sciences hosted this event.  Zadeh entertained his audience with a brief, but moving presentation on why his time in Computer Science at the university meant such a great deal to him, and he provided the audience with an algorithm to ensure success in their own pursuits.

Although Zadeh's company Zoosk focuses on helping people find love and long term partnership using finely tuned algorithms and smartly designed software, he explained that one of his own great loves is something that one cannot generally find by an algorithm at all--a love of education. Zadeh's love of learning propelled him from Iran to the United States, where his learning and incredible work ethic would ensure that he would co-found and become the CEO of a very successful company.

Zoosk now employs over one hundred people and impacts millions of people worldwide.

It is obvious that Zadeh values education. In addition to his graduate degree from UMD, he also holds an MBA. He received a B.S. in Computer Engineering from Sharif University of Technology in Tehran, Iran, the university he attended with his co-founder and friend Alex Mehr (PhD, Mechanical Engineering). Together, they decided to make the journey to the University of Maryland. As graduate students, they got involved in business competitions and were very successful, portending what entrepreneurial adventures Zadeh and Mehr had in store for them. Zoosk has over 27 million searchable matches in over 80 countries making it a leader in mobile dating worldwide.

Zadeh credits some of his thinking about the algorithm that informs Zoosk's Behavioral Matchmaking engine to courses that he took with the current chair of Computer Science, Professor Samir Khuller, as well as Professor V.S. Subrahmanian.  A former faculty member of the department,  Sudarshan Chawathe, now a  Professor Computer Science the University of Maine, fostered Zadeh's research interests. The  matchmaking technology is one that is dynamic-- it learns from the actions of Zoosk's member profiles and helps members meet compatible individuals.  His interest in algorithms and in large data sets were certainly cultivated in the Computer Science Department. Zadeh continually emphasizes what his education at the University still means to him, and has encouraged students and fellow alumni to live by his algorithm for life: find something that one loves to do, learn it well, and enjoy the success that follows.

In Zadeh's case, finding someplace (the Computer Science Department at UMD) and something he loved (algorithms and data science) helped others find someone to love.