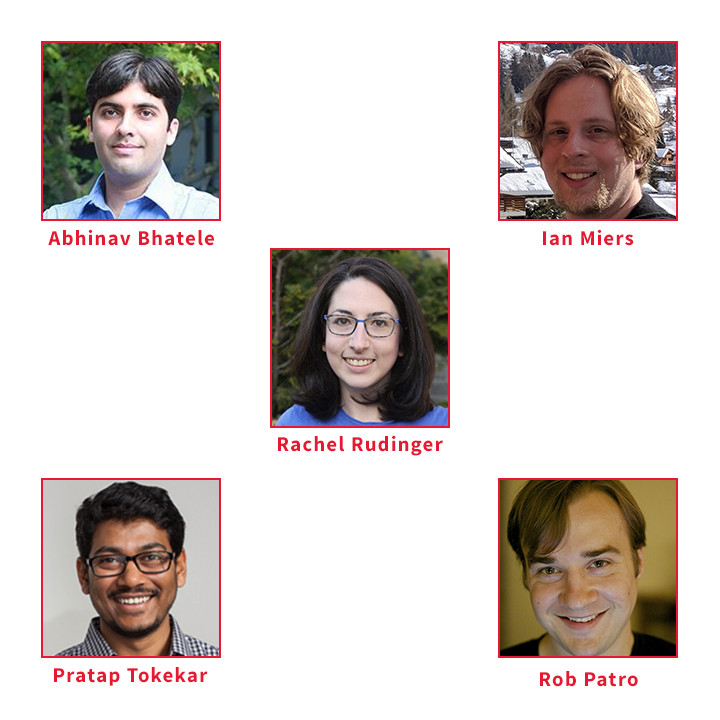 The Computer Science Department is pleased to announce our newest professors of computer science. This new group of professors have research expertise ranging from High performance computing to Robotics, from Computational Biology to Cybersecurity and Natural Language Processing.

The following faculty candidates will be joining the Department:

Robert Patro (June 30, 2019)
Patro’s research interests are in the design of algorithms and data structures for processing, organizing, indexing and querying high-throughput genomics data.
He also investigates topics at the intersection of efficient algorithms and statistical inference. More broadly, Patro’s interests extend to programming languages, computer graphics, scientific visualization, parallel computation and machine learning.
Patro’s research group will work in the Center for Bioinformatics and Computational Biology https://www.cbcb.umd.edu/
Prior to coming to UMD, he was an assistant professor in the Department of Computer Science at Stony Brook University. Patro received his doctorate in computer science from UMD in 2012.

Bhatele’s research interests are broadly in systems and networks, with a focus on parallel computing and data analytics.
He has published research on programming models and runtimes, network design and simulation, applications of machine learning to parallel systems, and on analyzing, modeling and optimizing the performance of parallel software and systems.
Bhatele comes to UMD from the Center for Applied Scientific Computing at Lawrence Livermore National Laboratory. He received his doctorate in computer science from the University of Illinois at Urbana-Champaign in 2010.

Pratap Tokekar (August 1-15, 2019)
Tokekar’s main research is robotics, with a focus on algorithms that enable aerial, ground and marine robots to actively sense and gather data in environments.
He also works on developing systems for applications related to environmental monitoring, precision agriculture, infrastructure inspection, and security and surveillance.
Tokekar joins UMD from the Bradley Department of Electrical and Computer Engineering at Virginia Tech where he was an assistant professor. While there, he directed the Robotics Algorithms & Autonomous Systems Lab. Tokekar is a recipient of the National Science Foundation’s CISE Research Initiation Initiative (CRII) award.
He received his doctorate in computer science from the University of Minnesota in 2014.

Ian Miers (July 1-15, 2020)
Miers’s research focuses on computer security and applied cryptography.
His work takes a context-driven approach to making cryptographic systems secure, reasoning backwards from real-world problems to design deployable cryptographic protocols that address the subtleties of security for production systems. This includes Zerocoin and Zerocash, the first systems to provide strongly private payments on top of public blockchains.
It also includes work on improving the security of mobile messaging, including attacks on iMessage and new techniques for forward secure encryption that guard against the exposure of encryption keys.
Miers is currently a postdoctoral researcher at Cornell Tech. He received his doctorate in computer science from Johns Hopkins University in 2017.

Rachel Rudinger (July 1-15, 2020)
Rudinger will work in the Computational Linguistics and Information Processing (CLIP) Lab https://wiki.umiacs.umd.edu/clip/index.php/Main_Page
Her research focuses on problems in natural language understanding, including knowledge acquisition from text, commonsense inference, computationally-tractable semantic representations, and semantic parsing.
Rudinger recently received her doctorate in computer science from the Johns Hopkins University Center for Language and Speech Processing.
Before coming to UMD, she will complete a one-year postdoctoral fellowship at the Allen Institute for Artificial Intelligence (AI2) in Seattle, joint with the University of Washington. The position is supported through AI2’s Young Investigator postdoctoral program.