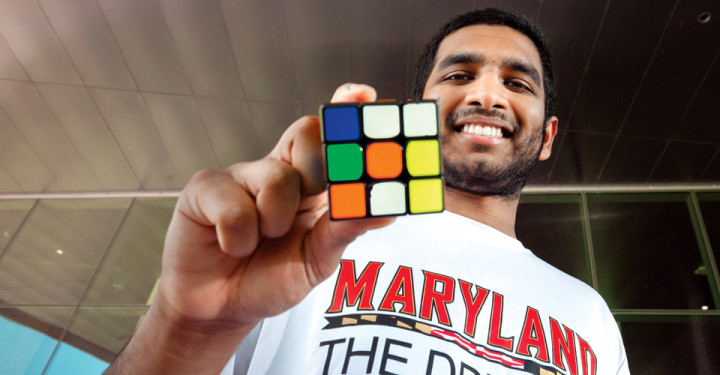 This article is republished from Terp

Pavan Ravindra ’21 stares intently at the jumbled Rubik’s Cube, then attacks. In the dim light of his College Park apartment and over the iffy video of a Zoom call, his hands dissolve in a blur of rapid twists and flips. He slams it down, solved, and hits the timer.

The result: just under 10 seconds.

What seems like a freakish display of skill, however, slightly embarrasses Ravindra, a dual-degree major in biochemistry and computer science. A world-class “cuber,” he’s often solved the Rubik’s Cube faster using just one hand. It’s also a lackluster showing, he says, by the standards of the star-studded, studious cubing community that has quietly sprouted on the Maryland campus—one strong enough to influence the college decision-making of high-school solvers from around the mid-Atlantic.

“There’s a huge concentration of talent here,” says Ravindra, a 2020 Goldwater Scholar who’s shifted his focus more to academics than competing, but remains active in the cubing world. “UMD is the best college for cubing, without a doubt.”

Thus, what UMD is to lacrosse, it’s quickly becoming as well to this pastime that took off in the ’80s, faded, then exploded anew in recent years as competition heated back up and new solving methods pushed times ever lower in the single digits. Of the 15 or so serious competitors on campus, roughly a half-dozen are significant figures in that race toward zero.

Computer science major Will Callan ’23 is ranked No. 2 in the world for average time solving the Rubik’s Cube’s little brother, the 2×2 cube. If Ravindra’s fastest solve of 5.58 seconds for the regular 3×3 model seems abrupt, consider that Callan often solves the “pocket cube” in under a second. (That’s the advantage of working with a puzzle with a few million possible combinations, compared to the regular cube’s 43 quintillion.)

Like many cubers, Callan figured out the basics in grade school, then realized he was fast—and that he wanted to beat other solvers.

“I had been competing for several years before I started focusing on the 2×2 cube,” he says. “The speed is really fun, and competitions are very close as well.”

Only 2/100ths of a second separate Callan from the Danish cuber ranked No. 1: “Yeah, it’s a pretty small gap, and I’m hoping very soon …” he says, trailing off.

Campus cubers point to Felix Lee ’16, now a Google software engineer, as community founder. A world-class cuber at River Hill High School in Howard County, he established UMD’s Rubik’s Cube Club and put the university on the map as a major location for competitions.

Second-year economics Ph.D. student Keaton Ellis ’18, another River Hill alum, made it his mission to beat the older Lee before he graduated from high school, but failed. He finally surpassed him at UMD, and became club president after Lee graduated.

Like Ravindra (yet another River Hill grad), Ellis specializes in one-handed cubing, and his 7.26-second solve ranks No. 5. At the height of friendly rivalry between them, he says, “it was not uncommon for our competitions to have the top three of us being the fastest podium in the world.”

No longer president but now a World Cube Association delegate, Ellis oversees regional competitions, including those on the campus, which draw hundreds of competitors two or three times yearly (although on hold at the moment), assuring a continual turning of the cube at UMD.

“People come here, they get familiar with campus, they learn their way around Stamp, they meet the people and get comfortable,” he says. “It sways some of their college decisions.”