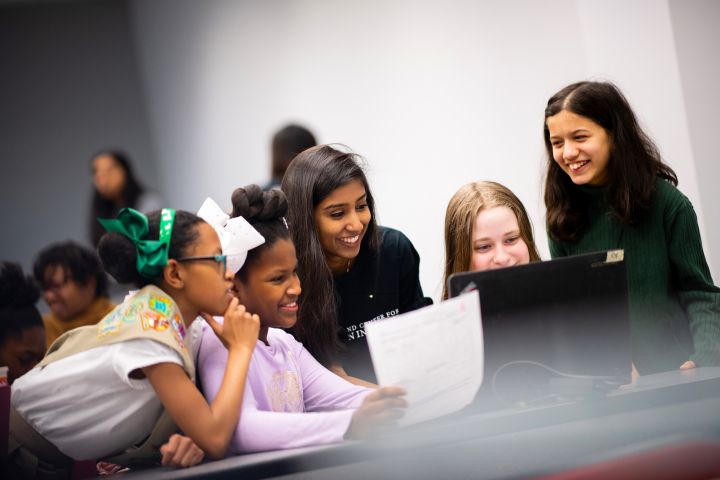 Faculty, staff and students at the University of Maryland have joined a national effort to advance accessibility and educational opportunities for young people interested in computer science via a comprehensive initiative that was announced on Nov. 17.

The Maryland Center for Women in Computing (MCWIC) and the Iribe Initiative for Inclusion and Diversity in Computing (I4C) are two of the 127 organizations involved in CSforALL, a wide-ranging consortium launched in 2016 whose mission is to make computer science an integral part of the educational experience for all K–12 students and teachers.

UMD’s commitment to CSforALL will include workshops and summer camps for young people—focused mostly on those who identify as female or non-binary and/or Black, Latinx, or Native American—in the Washington, D.C., and Maryland region.

“We’re excited to be part of this national movement to improve the diversity of computing and to make a community that is inclusive and welcoming for all,” says Jandelyn Plane, a principal lecturer in computer science who serves as director of both MCWIC and I4C.

Plane says specific plans for the CSforALL initiative include:

• I4C will offer a series of summer camps and workshops to 500 middle and high school-aged students who identify as female or non-binary and/or Black, Latinx, or Native American.

Both of these UMD-based efforts fit well within the goals and aspirations of the 165 new educational commitments announced by CSforALL.

“The collective impact and systems level change that the computer science education community is making through CSforALL commitments are pushing us all forward toward the goal of rigorous, inclusive and sustainable CS for all youth,” says Ruthe Farmer, the organization’s chief evangelist.

UMD activities tied to CSforALL will benefit from the experience that Maryland faculty and student volunteers already have in working with young people through successful programs like CompSciConnect, says Kate Atchison, the assistant director for MCWIC and I4C.

“We’re thrilled to be working with other the organizations in CSforALL as part of a collective, forward-looking commitment to building an advanced and sustainable K–12 computer science education system that is effective both in and out of the classroom,” Atchison says.

About the Maryland Center for Women in Computing: The center, launched in 2014, works to increase diversity in all fields of computing by providing a variety of opportunities for women to engage and contribute to the technical community through research, education, outreach and partnerships. The center is supported by the College of Computer, Mathematical, and Natural Sciences, the Department of Computer Science, and the University of Maryland Institute for Advanced Computer Studies.

About the Iribe Initiative for Inclusion and Diversity in Computing: The initiative, launched in 2019 with strong support from UMD alumnus Brendan Iribe, is committed to making computing a field that includes participation of individuals across the intersections of gender identification, race, ethnicity, socioeconomic status, sexual orientation and disability status.