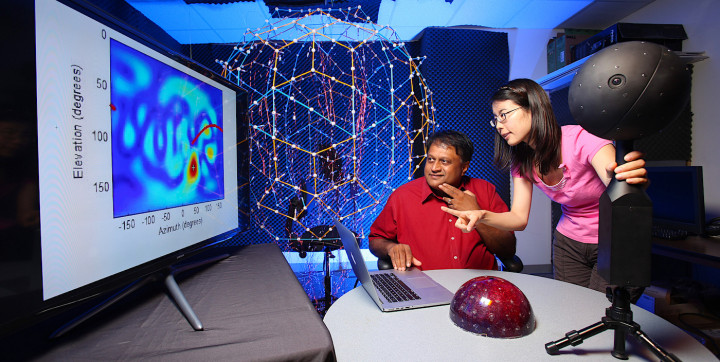 The University System of Maryland (USM) Momentum Fund has invested $500,000 in VisiSonics Corp., an early-stage company based in College Park that was founded by Ramani Duraiswami, a professor of computer science with an appointment in the University of Maryland Institute for Advanced Computer Studies.

“We are thrilled to work with the Momentum Fund to help bring cutting-edge audio technology from Maryland to the rest of the world,” says Duraiswami, who is CEO of the company. “Our goal is to build VisiSonics into a household name in audio, personalizing and enhancing sound for everyone.”

With the investment from the Momentum Fund, VisiSonics has just completed a financing round of $3.5 million, with the additional funding coming from other sources led by an audio company with ties to the music, cinema and gaming markets.

Ideal for gaming and headphones, from desktops to mobile, Realspace 3D Audio adds another dimension to sound, giving it a 360-degree radius and making it sound like it comes from different locations in space.

VisiSonics’ second product line features audio cameras that can analyze environments for noise, capture audio in a 360-degree space, or focus on a specific area of interest. Each audio camera consists of an array of as many as 64 microphones. The company’s cameras are especially useful for analyzing industrial noise in a space, such as an automobile.

VisiSonics’ technology was initially developed at the University of Maryland through $6 million in funding from the National Science Foundation (NSF) and Defense Advanced Research Projects Agency (DARPA). The company has exclusive licenses to six university patents related to its technologies.

The company’s founders took over management of the company in 2017, brought it to solvency, and signed several business-to-business licensing deals. The company is now realizing $1.1 million in annual recurring revenues, according to Duraiswami.

“Our plan, going forward, is to leverage our funding to expand our development, management and sales capacities to meet the needs of a rapidly growing audio marketplace,” he says.

About the USM Momentum Fund
The Maryland Momentum Fund is an initiative of the University System of Maryland (USM) to provide late seed investment funding for promising technology ventures that come out of any of the 12 constituent USM institutions, its research parks, and its students, faculty or graduates. With a $10M commitment from the USM already in place, the Fund co-invests with venture capitalists, foundations, and angel investors.

VisiSonics is only the sixth startup from the University of Maryland, College Park, to receive a USM Momentum Fund award.