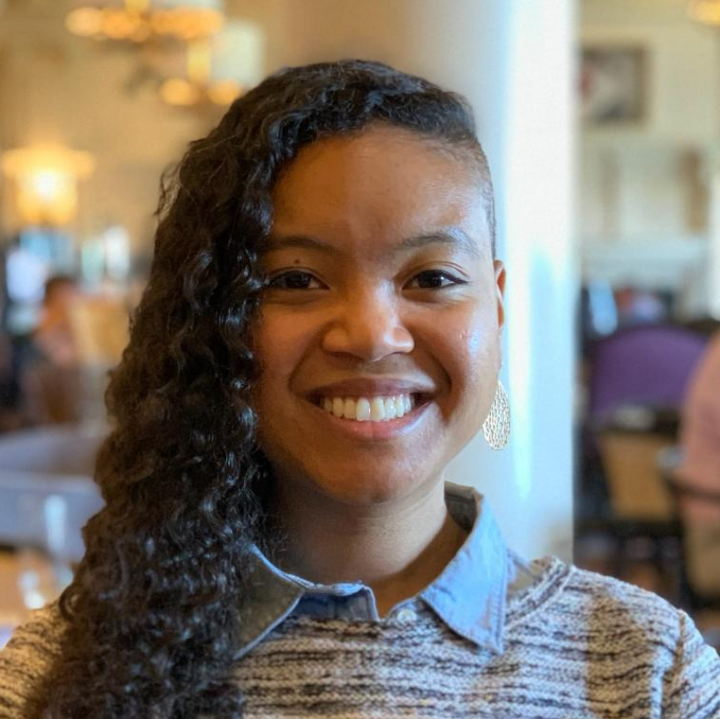 Leilani Battle loves what she does, and her passion comes through in abundant productivity. The assistant professor of computer science at the University of Maryland earned her Ph.D. just 3 1/2 years ago, and she has already racked up an impressive number of mentees and published research papers.

“I love doing research,” she said, “and really early on in my Ph.D., I learned that I could teach others, especially women and people of color, to have the same or similar skill sets and walk them down that path to the point where they could become accomplished researchers and independent researchers in their own right. That excited me, and I just knew I wanted to keep doing that.”

At just 33 years old, Battle, who has a joint appointment in the University of Maryland Institute for Advanced Computer Studies (UMIACS) has advised 11 undergraduate students, three master’s students and five Ph.D. students across 10 research projects. And her research track record is just as robust, with more than 20 publications, 10 of them listing her as the first author.

With such enthusiasm for her chosen career, it’s hard to believe Battle isn’t one of those people who cut their teeth programming computers and dreamed of being a college professor. In fact, she didn’t take a computer science class until college and didn’t consider a career in academia until graduate school.

As a child, Battle thought she might like to design characters for video games, but by the end of high school, she decided the technical side of gaming offered a more stable path than the artistic side. Her strengths in math and science earned her an invitation to enroll directly in the University of Washington’s competitive computer science and engineering program.

“Since I barely knew programming, I didn’t know what I wanted to do or what I could do with it,” Battle remembered. “I started doing research experiences at UW, and that’s where I got my first taste of what working in computer science outside of games was all about.”

Battle was quickly drawn to working with databases. She loved the idea of creating order and developing systems to process large amounts of information. After earning her bachelor’s degree in computer engineering in 2011, she went on to earn her master’s degree and Ph.D. from the Massachusetts Institute of Technology.

In graduate school, Battle discovered an interest in human-computer interactions and began researching how scientists use data and how data visualization tools can be made more intuitive and easier to use. In that work, she saw an opportunity to help level the playing field for people who don’t have expertise in data science.

“Database researchers are really great at designing software that is extremely efficient at processing data, but they don't often think about how people are actually going to use their software in the real world,” Battle said. “They assume the target user base is made up of expert programmers who will figure it out, but if you want to broaden participation in data science, you have to relax that assumption.”

For Battle, that means designing systems to help people without a degree in programming or data analysis interpret large amounts of data. She has studied how earth scientists explore satellite data and how businesspeople work with data analytic tools. Her goal is to develop data management and visualization tools that are intuitive and user-friendly.

“I seek to understand how people interact with a range of data science tools and how they go from not understanding a dataset at all or seeing it for the first time to extracting insight and meaning from that data,” Battle said.

To conduct her work, Battle logs how people browse and manipulate data, observes them trying to perform specific tasks, and interviews them about their decisions. She uses machine learning to look for patterns in their behavior and makes assumptions about their thought processes and reasoning.

Battle’s work crosses multiple disciplines, which means she must understand the constraints of working with human subjects and tap the expertise of colleagues who study psychology, statistics, machine learning and other related fields.

“I found the research at the intersection where humans and computers interact more interesting than anything I could do in any one area alone,” she said. “And there's such a need right now for having more of this human-centered focus, especially for data science work.”

It takes courage to straddle multiple areas of expertise, especially for a young scientist, but Battle’s confidence and willingness to take on the challenge has paid off. In June 2020, Battle was named one of the MIT Technology Review’s top 35 innovators under 35, which recognizes “exceptionally talented technologists whose innovations are poised to transform the world.”

For Battle, the potential to transform the world is more than academic. She is motivated by a desire to make one of the world’s most important resources more accessible to more people.

“Data is basically the new gold, and if an individual knows how to harness it and use it to their advantage, it's going to make a huge difference to them,” Battle said. “Machine learning, artificial intelligence and data science are influencing almost every aspect of our lives, our work, our friends, their lives and their work. So, if we all want a hand in shaping the future of our societies, we should all have access to this data and learn how to process and analyze it.”

As more people with a broader range of backgrounds are able to access and easily browse the vast datasets being collected, they will bring their unique expertise and skillsets to the information hidden within the data. They will ask questions others hadn’t thought to ask.

With the broad goal of making data easier to use, Battle found UMD to be an attractive location for launching her career. She cited the university’s strengths in systems research, human-computer interaction, machine learning and data visualization in her decision to join the faculty in 2018.

“Having multiple areas that I work in where I already felt so well-supported research-wise was really appealing to me,” Battle said. “The Human-Computer Interaction Lab certainly had a strong influence on my decision to come to UMD, and the resources and the opportunities of UMIACS were helpful as well.”

With so much going on in her professional life, it’s hard to imagine Battle finds time for hobbies, but she is an avid reader, having logged 70 books in 2020. She sews, makes sourdough bread and pickled foods, and enjoys preparing multiple meals at a time and storing them for later use. The latter activity appeals to her love of orderly systems.

“I'm not a huge fan of cooking per se, but I like cooking in mass quantities, efficiently,” she said.

Her love of efficiency spills into her life in other ways, too. She’s an avid life-logger, which means she tracks her own data. That’s how she knows exactly how many books she read last year. Battle said her husband, Raymond, who is also her high school sweetheart, supports her quirky hobbies as long as she doesn’t make him do too much tracking of his own.

Raymond is a Salesforce programmer who also studied computer science, so presumably, he understands Battle’s love for systems and processes. Surely, he can’t deny that her affinity for them set her on a steep upward trajectory toward a long and successful career.