They have been doing research with UMD CS faculty members since they were in high school and middle school, respectively.
April 13, 2021 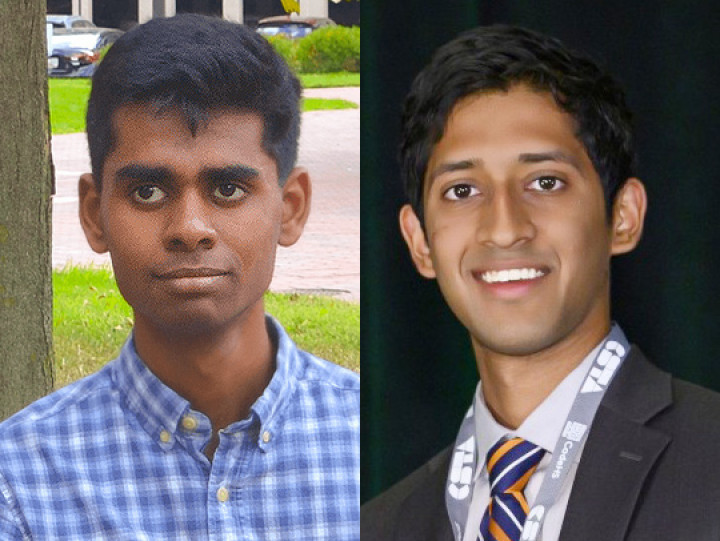 Naveen Raman, a junior computer science and mathematics double major at the University of Maryland, and Naveen Durvasula, a sophomore dual-degree student in electrical engineering and computer science and business administration at UC Berkeley who has been conducting computer science research at UMD for five years, were awarded scholarships by the Barry Goldwater Scholarship and Excellence in Education Foundation. The foundation encourages students to pursue advanced study and research careers in the sciences, engineering and mathematics.

Over the last decade, UMD’s nominations yielded 37 scholarships—the second most in the nation behind Stanford University—and a UMD computer science major has been named Goldwater Scholar every year since 2016.

Since then, Raman—who is also a member of the Advanced Cybersecurity Experience for Students in the Honors College—has published four papers and submitted a fifth for publication.

He began by developing algorithms to identify cancer mutation signatures with Srinivasan and former Assistant Professor Max Leiserson and moved on to working with Dickerson to develop policies that balance fairness and profit in ride-pooling systems.

Durvasula is interested in problems that lie at the intersection of theoretical computer science, machine learning and mechanism design. He has co-authored two published papers and submitted two more for publication on his research at Maryland.

He began conducting research at UMD with Srinivasan and Dickerson on a mix of theoretical and applied problems in optimization and learning.

“Even though I was in middle school, Aravind treated me as he would any other student, encouraging me to engage with graduate material on randomized algorithms,” Durvasula said. “I am grateful to him and John for helping me realize the joy of research and the research process.”

The trio began working together on a project to improve kidney exchange programs. These programs have saved thousands of lives by matching people who need kidneys with willing donors—typically total strangers. But the system is challenging.

Not all patients are equally easy to match, and donor organs are not of equal quality—factors that affect medical and insurance decisions. Some patients are matched within weeks, while others may wait for years with no match offers at all.

To help address these challenges, Durvasula developed a method to estimate organ quality and waiting time for a kidney for a specific patient and paired willing donor who enter an exchange. He has verified the accuracy of his model on real U.S. kidney exchange data using the most accurate kidney exchange simulator.

In the future, the researchers see this model being used a decision-support system to help inform doctors, patients with end-stage renal disease and would-be kidney donors about critical planning decisions—such as accepting a "weaker" proffered kidney now instead of waiting for a "stronger" potentially available kidney in the future.

“Naveen Durvasula has the unique ability to quickly and deeply understand a diverse array of topics in pure mathematics, statistics and computer science. He is also very clearly driven by a desire to see both near- and long-term impact,” Dickerson said. “Naveen is also considerate, giving—and forgiving, when I ask him for the third time to explain an idea more slowly—and he has a research and work ethic that I would pay to instill in all students.”

Durvasula is also working with Srinivasan and Dickerson on a project in the area of reinforcement learning, a branch of machine learning that aims to solve problems related to decision-making.

While modern algorithms can solve a variety of different tasks, they need to train by repeating the task thousands of times. However, certain tasks, such as negotiations, can only be attempted once. Durvasula developed an algorithm that succeeds in this severely constrained setting by creating successively better approximations of the environment that can be repeatedly trained on.

From 2016-18, he worked with UMD Computer Science Professor William Gasarch on the so-called “Muffin Problem.” This problem asks: What is the best way to divide up m muffins for s students so that everyone gets m/s muffins, with the smallest pieces maximized?

In addition to being invited to the 2018 Research Science Institute, Durvasula served as head teaching assistant for a six-week statistics course last summer for the Summer Stem Institute. He also co-founded Aerostry, which is developing a balloon-based system to help firefighters detect and monitor wildfires more effectively.

Durvasula plans to apply to Ph.D. programs in computer science and specialize in theory and artificial intelligence.

“It is such a pleasure to work with such highly motivated students,” Srinivasan said. “I look forward eagerly to the ways in which Naveen Raman and Naveen Durvasula will impact our world positively and significantly.”