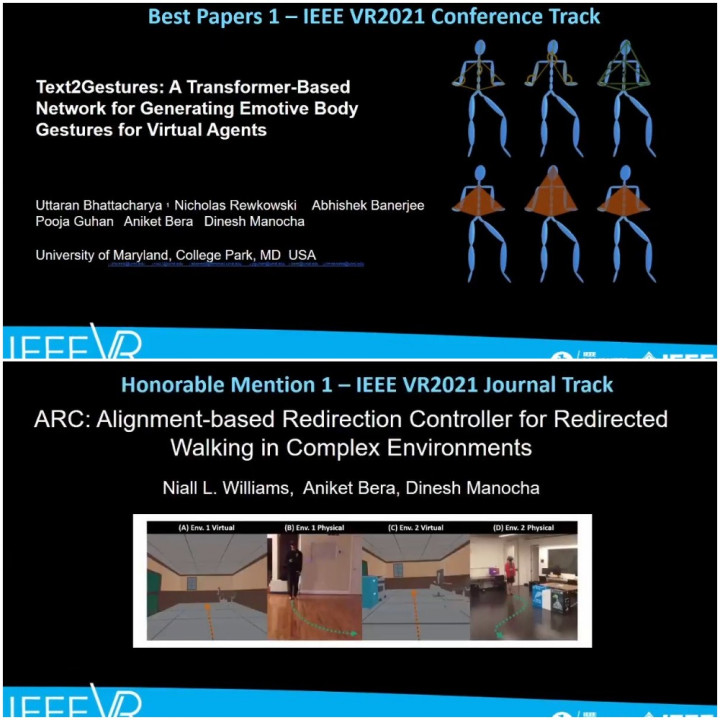 The awarded work focuses on improving  the efficiency of virtual agents used in areas like virtual and augmented reality (VR/AR), online learning,  and virtual social interactions to create highly realistic agents endowed with social and emotional intelligence. The authors described a novel approach that combined ideas from machine learning, affective computing, and biomechanics to automatically generate emotionally expressive gestures that result in natural interactions of virtual agents with the human users. Besides, AR/VR such agents are increasingly used in digital and virtual platforms for everyday communication and interactions. The team plans to further the research by combining the Text2Gestures with varying facial expressions corresponding to different emotions and vary the emotional tone in voices.

A video overview of the research work can be found here.

The GAMMA group also received an honorable mention for their work on creating a more immersive and smooth virtual experience of locomotion for users in VR/AR environments. Overall, locomotion in these environments remains a difficult problem, as the users often wish to explore large, virtual environments while located in much smaller physical environments in the real world.

The paper that received honorable mention is titled  “ARC: Alignment-based Redirection Controller for Redirected Walking in Complex Environments, ” and is authored by graduate student Niall Williams, Aniket Bera, and Dinesh Manocha. This paper describes a novel redirected walking algorithm based on alignment that allows the user to explore large and complex virtual environments using natural walking, while minimizing the number of collisions with obstacles in the physical environment.

According to the researchers, Redirected Walking is a technique that allows users to explore large virtual environments while constrained to smaller real-world environments by manipulating the mapping between the user’s physical and virtual movements. The alignment-based redirection controller (ARC) steers the user such that their proximity to obstacles in the physical environment matches the proximity to obstacles in the virtual environment as closely as possible, which minimizes the chance of collisions with physical obstacles.The group intends to extend Alignment-based Redirection Controller (ARC) to dynamic scenes with moving obstacles and multiple users for future work.

A video overview of the project can be found here.

The UMD GAMMA group was established in 2018 and since then the members have  presented 15 papers at the prestigious IEEE VR annual conference.