Jose Calderon Sees Teaching as a Craft to Work On, Not a Skill to Master 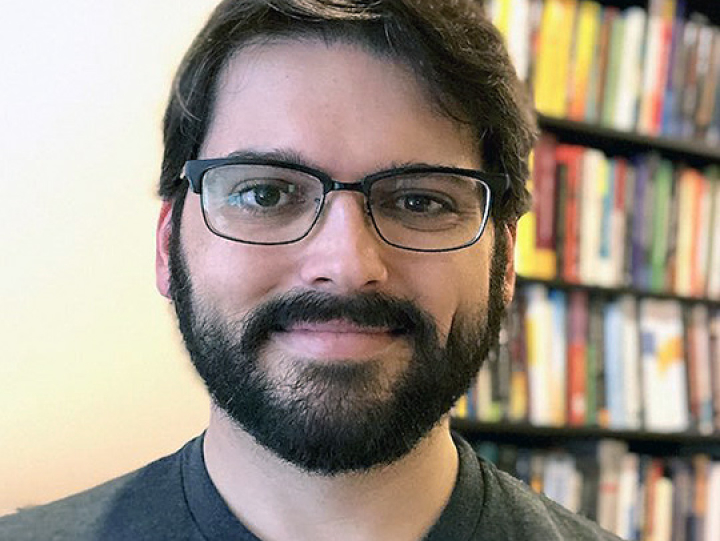 When Jose Calderon found out that he was being honored with the 2021 Dean’s Outstanding Lecturer Award from the University of Maryland’s College of Computer, Mathematical, and Natural Sciences, he was shocked.

“I was very flattered and very surprised. I didn’t even know I was being considered for the award,” said Calderon, a lecturer in the Department of Computer Science.

The Dean’s Outstanding Lecturer Award is a special award because students nominate lecturers to receive the recognition. The award also comes with a $1,000 prize.

“I’m always trying to focus on how I can improve, so to be acknowledged for how I am currently doing was a pleasant surprise,” he said.

Calderon views teaching like music—as a craft to work on, not a skill to master.

“With teaching, there's no finished state where you've perfectly mastered it. There's always more to learn and things you need to work on improving,” he said. “My goal is to refine how I am as a lecturer and improve that skill.”

Calderon’s path to becoming a computer science lecturer at UMD was a non-traditional one. He majored in music at the University of Miami with a minor in electrical engineering.

“I got into teaching when I was an undergraduate and I really enjoyed it,” he said. “So much so that I continued to teach while I was in grad school. Whenever I had the opportunity to teach, I took it.”

Calderon attended graduate school at the University of York in England at the suggestion of a professor.

“I was a teaching assistant for one of my electrical engineering professors and he suggested that I go to graduate school in the U.K. because he thought I would perform well under their way of instructing and grading,” he said. “In the U.K., at the time, they assessed students at the end of the semester based on one large exam or project. I’ve always been better at managing one big problem than multiple tiny ones, so I decided to go for it.”

After receiving his master’s degree and Ph.D. in computer science from the University of York, Calderon returned to the U.S. and took a job as a research scientist at the research and development company, Galois. However, his enjoyment of teaching never went away. It was actually through his work with Galois that Calderon ended up teaching at Maryland.

“The team that I was on at work was collaborating with the University of Maryland, and through that collaboration I got to know some of the professors,” he recalled.

In fall 2019, one of the professors tweeted about the large number of computer science majors at Maryland, and Calderon saw that as an opportunity to teach once again.

“I saw the tweet and replied asking if they needed any assistance in the department, and that very next semester I was there teaching. It all happened very organically,” he said.

Calderon began as an adjunct lecturer in spring 2020 while continuing to work at Galois. During that first semester, his love of teaching took hold of him. He made the switch to full-time lecturer—teaching CMSC 320: Introduction to Data Science and CMSC 430: Introduction to Compilers—and part-time Galois employee.

Calderon’s favorite part of research was reporting results at the end of a successful project, and for him teaching feels like that all the time.

“I love teaching because I believe that the ideas in computer science are beautiful and interesting and I like that I get to be there when a lot of students encounter these ideas for the first time,” he said. “It’s also really rewarding to see when a student has their lightbulb moment and something clicks for them for the first time.”

To get those lightbulb moments out of his students, Calderon constantly works to improve as a lecturer.

“I want my students to treat computer science like a skill that you have to get better at every day with no endpoint,” he said. “I look at teaching the same way. I like to compare it to music or sports; you could be the best basketball player in the world, but you’re still going to work on your jump shot every day.”

One way Calderon improves his teaching skills is by regularly asking his students for feedback.

“When we were in person and students would stop by my office or stay after class to ask a question, I would use that as an opportunity to ask them how they thought the course was going,” Calderon said. “Since the pandemic, I’ve included feedback as a part of my midterm exams. I think if you make it clear that you’re receptive to feedback, then students are usually pretty open and honest.”

Calderon is also working to make CMSC 430 one of the best compilers courses in the nation. A traditional compilers course teaches students how to make a compiler—which is a program that converts instructions into a code so that they can be read and executed by a computer—in the order that the techniques to translate code are used.

The course Calderon developed with Associate Professor David Van Horn takes a different approach. They teach students about the full compiler at the beginning of the semester and then focus on different parts of it in each lecture as the semester progresses.

“There’s no right or wrong way to teach the course, but I’m a big fan of the way we do it here so the students don’t have to wait until the end of the semester to reach a full compiler,” he said.

The excitement Calderon has for this course and his desire to continuously grow are what earned him the Dean’s Outstanding Lecturer Award.

“Jose is the most passionate and talented lecturer I have had at UMD,” said computer science major Praise Ntali. “He consistently posts high-quality lectures, and CMSC 320 is one of the best experiences I have had in a CS class.”

Calderon is humbled by Ntali’s words and the award.

“I’m very flattered, but I’m just the face of a team of people who help my courses run smoothly,” he said. “I couldn’t be a great teacher without my teaching assistants who help me get everything done. While the award is a great morale boost, I’m just going to focus on getting even better.”