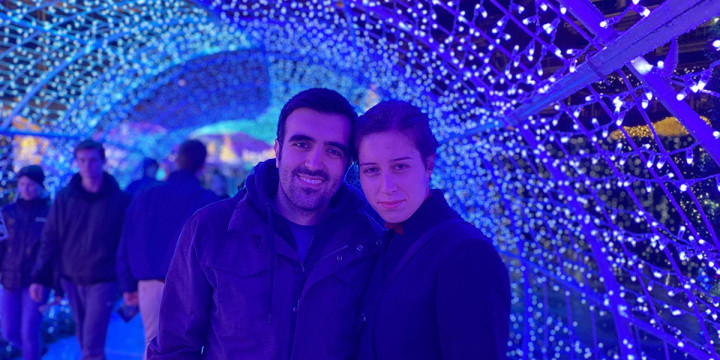 When Soheil Behnezhad and Mahsa Derakhshan met, it was clear they shared a passion for solving difficult problems. They were 17 years old, attending a camp to compete in the 19th Iranian National Olympiad in Informatics. The two were among 40 youths selected from roughly 10,000 students across the country to participate in the camp. Eight took home gold medals, two of which went to Behnezhad and Derakhshan.

Now, 11 years later, they are married and still share a passion for difficult problems. But now, they are solving difficult problems to earn their Ph.D.s in computer science at the University of Maryland. And soon, they will move to Boston where both have accepted assistant professorships in the Khoury College of Computer Sciences at Northeastern University. With remarkably similar career paths, the two have become supportive partners in both life and work.

“Every time I think of an interesting problem or a crazy idea, she’s the first person I share that with,” Behnezhad said. “It’s hard to have someone super smart with you at home and not want to share all your ideas with them.”

Behnezhad’s work focuses on developing new algorithms and tools to process massive datasets, like those that are too large to be stored in one computer and must be distributed across multiple servers. Derakhshan (M.S. ’18, computer science) designs algorithms for online markets—systems that match advertisers and retailers with customers.

Derakhshan and Behnezhad are both advised by Mohammad Hajiaghayi, the Jack and Rita G. Minker Professor in Computer Science who also holds a joint appointment in the university's Institute for Advanced Computer Studies.

The couple first met Hajiaghayi when he visited Sharif University of Technology in Tehran, where they were pursuing undergraduate degrees in software engineering. They were looking for graduate school opportunities where they would both be happy.

“I was fascinated by Mohammad’s work,” Behnezhad said. “I knew that he gathers brilliant students to his lab, and I wanted to benefit from being in that environment. And I really have.”

Since arriving at UMD in 2016, Derakhshan and Behnezhad have excelled and both received Google Ph.D. Fellowships in Algorithms, Optimizations and Markets (he in 2019, she in 2020).

Derakhshan ranked 56th at the International Collegiate Programming Contest World Finals in 2017 out of more than 10,000 contestants worldwide. She was also selected to give a Rising Stars Talk in 2020 at the Association for Computing Machinery’s TCS Women Spotlight Workshop for women in theoretical computer science.

They plan to finish their Ph.D.s this year, and both have postdoctoral fellowships lined up before their faculty positions begin in the fall 2022.

“Mahsa and Soheil are both rising stars in theoretical computer science,” Hajiaghayi said. “They were top theory candidates in the job market this year and they indeed show the quality of Ph.D. students graduating from UMD who are on par, if not better, than graduates of other top schools. I am very proud to serve as their advisor and can’t wait to see their future success.”

Behnezhad is eager to begin a yearlong fellowship at Stanford.

“I’m really excited to expand my network at Stanford,” he said. “I want to learn from people in different fields. One of the things that I’ve learned doing research is that you can’t really work in isolation. When you understand what people are doing in different areas, sometimes you can combine your different areas of expertise and benefit from that.”

Behnezhad is also excited to step into the role of assistant professor once he gets to Northeastern.

“I really like teaching and I’m looking forward to transitioning to a faculty position and teaching the things I find interesting and care about,” he said.

Among those things he cares about is optimizing algorithms to do computations quickly.

“People have developed fast algorithms to do a lot of things,” he said. “For instance, social networks have billions of users, and yet you can find and add someone to your friend network instantaneously. But there are some large-scale data processing problems people believe we may not be able to solve fast. However, computer scientists don’t know how to formally prove whether that is the case or not. Like, are there certain characteristics of a problem that can tell us this is something an algorithm won’t be able to do quickly? That kind of tool would be very useful.”

While Behnezhad focuses on maximizing speed, Derakhshan focuses on maximizing outcomes. She has two postdoctoral fellowships planned before moving to Boston. The first will be at Princeton University where she will look at designing algorithms for online auctions that maximize revenue. Then she will join Behnezhad in California at the University of California, Berkeley. There, she will work on problems related to algorithmic game theory.

“These problems for me are very interesting because they have real-life applications,” she said. “The combination of having a real challenge to solve and the application to real life is what I really like about this work.”

The challenge has always been important to Derakhshan, who first became interested in pursuing computer science after a friend gave her a book in high school. The book, “Mathematics of Choice: How to Count Without Counting,” is on combinatorics, a field of mathematics that has many applications for logic and computer science. It lit a fire in Derakhshan.

“I started solving some of the problems in the book, and I really liked it,” she recalled. “Then, I took the first level of exams for the Olympiad, and when I passed, I thought, ‘OK, I could do this.’ And then, going to that camp and winning the gold, that really changed my life.”

Winning the gold enabled her to skip all the entrance exams for colleges in Iran and choose the best university. She had no idea it would lead to an academic career in the U.S.

“It has been a fantastic experience to move here,” Behnezhad said. “I really like that you see a mixture of all cultures from all over the world. And I was impressed that there were so many new, interesting foods. We don’t tend to have sweet flavors in our meals like you do here, foods like orange chicken and teriyaki.”

He also fell in love with Buffalo chicken wings and tacos, which Derakhshan shares a taste for along with Indian food and berries that were new to her. The raspberries and blueberries are a consolation for missing the fruits of home like fresh persimmons and well-ripened figs that she said just don’t taste the same here.

They will miss the community of friends they found in College Park, including their intramural volleyball team. Despite the team’s name—Khasteh, which means “tired” in Farsi—they had enough energy to win a silver medal in the intramural championships before the pandemic. The team may have had a leg up with Behnezhad, who grew up practicing with his younger brother who is a professional volleyball player in Iran.

In Boston, they hope to join a new volleyball team; but whatever happens, they will have each other for support and to bounce ideas off of as they continue on their journey together.