The UMD Loop team is one of 12 teams chosen to compete in The Boring Company’s tunnel-boring competition this summer
June 07, 2021 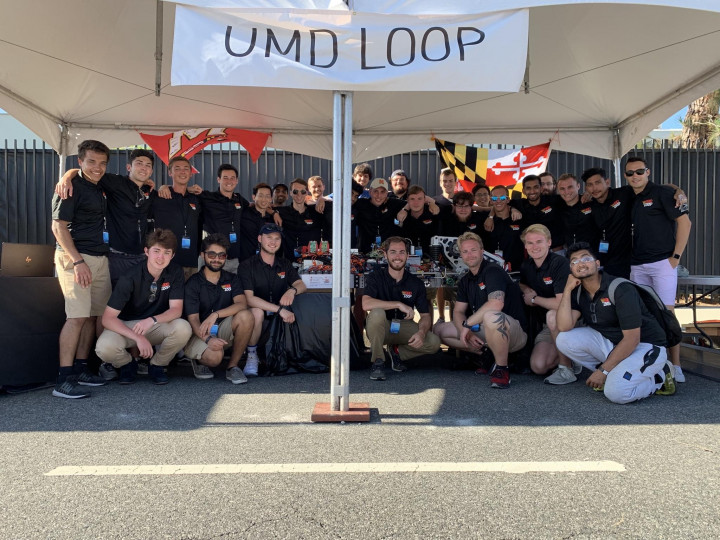 University of Maryland computer science majors Ritwika Das, Tyler Han and Arjun Vedantham won’t have a boring summer this year. That’s because they will be testing their design, building and tunneling (aka boring) skills in The Boring Company’s “Not-a-Boring Competition.”

“We’re very excited about the competition,” said Das, software lead for UMD’s team, known as UMD Loop. “We normally focus on creating hyperloop pods, but we learned about this competition and thought it would be a great new challenge for the team to tackle.”

The UMD Loop team is no stranger to competitions. The team was founded six years ago to compete in the SpaceX Hyperloop Pod Competitions, where participants design a pod meant to carry people through pressurized hyperloop tunnels at high speeds. The UMD Loop team competed in 2017 and 2019, even bringing home awards for performance in operations and overall pod design.

The Not-a-Boring Competition is different, though, challenging teams to bore a 30-meter (98-foot) tunnel with a cross-sectional area of 0.2 square meters (2 square feet). Teams can win a prize if they are the fastest to complete their tunnel, the fastest to complete their tunnel and driving surface, or create the most accurate guidance system for the tunnel-boring machine.

The UMD Loop team is one of 12 teams competing out of nearly 400 applicants from around the world. To be chosen for the competition, the team had to submit their tunnel-boring machine design to The Boring Company for review. The preparation to even qualify to compete took months of hard work.

“We found out about the competition in August of 2020 and began to research it. There wasn’t a hyperloop competition last year so the team was very eager to compete,” Das said. “To get into the competition we had to present our preliminary tunnel boring machine design in October. It was a 30-slide PowerPoint that detailed how we were going to build our tunnel-boring machine.”

Near the end of the fall semester, the team learned that The Boring Company liked their preliminary design and that they were going to move forward to the next round.

“We spent most of winter break creating our final design packet, which was a 120-page document detailing how we were going to build our tunnel-boring machine and bore the tunnel,” Das said. “We found out in the beginning of February that we made it through to the final competition.”

To pull off such a hefty feat, the UMD Loop team divided into two groups: avionics and mechanics. The mechanics team then further divided into four subgroups that handle excavation, hydraulics and thermals, building the machine’s skeleton, and tunnel support. The avionics team divided into software and electrical subgroups. Das, Han and Vedantham are all members of the software subgroup.

As the software lead, Das, a junior computer science major, has to consider all of UMD Loop’s software needs to make sure the tunnel-boring machine functions properly.

“When the machine goes into the ground, it will be pretty difficult to get an estimate of its location, but it’s necessary in order to steer it the right way,” said Han, a junior computer science and aerospace engineering double-degree student. “My job is to estimate its location and determine how to move in order to navigate correctly. We've created a mathematical model of the boring machine while it's underground, so we can determine the correct movements by using this model and solving a series of equations. Ultimately, this is done by a computer algorithm which interprets our sensors' data and executes movements accordingly.”

Once Han creates his software, Vedantham’s software will help the instructions actually connect with the machine.

“As a part of the software subteam, my focus is working on the telemetry systems and programming,” said Vedantham, a freshman computer science major. “The telemetry system is what allows us to interact and communicate with the tunnel-boring machine itself and make sure everything is operating properly. I’m helping with creating one unified software framework so that code written for different parts of the system can communicate with each other.”

Das, Han and Vedantham all agree that one of the most enjoyable parts of being on the UMD Loop team and participating in this competition is seeing real-world applications for the things they’ve learned in class.

“I just finished taking CMSC 216: Introduction to Computer Systems, and I’ve been using a lot of the stuff I learned in that class in my work for UMD Loop,” Vedantham said. “It was interesting to learn the concepts and then immediately apply them to this project.”

Han also enjoys being able to turn what he learns in class from the theoretical into the practical.

“In class you learn about certain things, but you may not know what the real-world application is,” he said. “Being a part of the UMD Loop team, you get to solve real-world problems, like how to build tunnels that can hopefully allow new ways of transportation, and you realize that you’re solving them with stuff you’ve learned in class.”

The official date and location for this summer’s competition have not yet been announced. The team is looking forward to using what they’ve learned and showcasing their hard work at the final competition, where they all agree that UMD has a good shot at winning.

“I love being on the team and it’s given me some purpose to use stuff that I’ve learned at UMD,” Das said. “I’m proud of the work that our entire team has put in and once we have our final product at the competition this summer, I believe we have a pretty good chance of winning.”