Bringing Data Together to Solve Problems

CS alumni Evren Sirin and Mike Grove are on a mission with their knowledge graph platform company Stardog
July 12, 2021 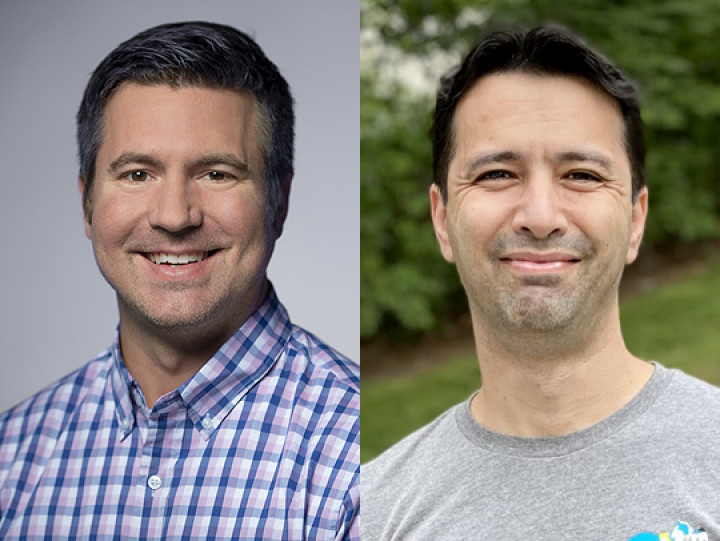 In 2002, in two different laboratories in the same building at 8400 Baltimore Avenue, adjacent to the University of Maryland campus, two computer scientists were working on making workplace technology smarter—they just didn’t know each other yet.

On the second floor, recent graduate Mike Grove (B.S. ’02, computer science) was exploring dynamic office environments as a research assistant for Fujitsu, an information and communication technology company. Below him on the first floor, Evren Sirin (M.S. ’04, Ph.D. ’06, computer science) was taking his thesis research in exactly the same direction.

Neither Grove nor Sirin remember much about the day they met, but looking back they both realize it was the beginning of a great friendship and much more.

“Everything Evren was researching and building for his dissertation, I was getting to play with through Fujitsu,” Grove recalled. “We were directly involved in real-world problems and trying to solve them using cutting-edge research. And to some degree, that’s still what we’re doing.”

“The project was ahead of its time,” Sirin said. “This was five years before the first iPhone was released and the devices we had were very primitive compared to today. But the data technologies we were using at those early days became the foundation of what we are doing today.”

Nearly 20 years later, Grove and Sirin—along with Kendall Clark, a computer scientist they met at UMD—have grown their research interests into a thriving business. Together, they founded Stardog, which Fast Company ranked as one of the top 10 most innovative enterprise companies on the planet in 2020. The company provides big-picture solutions to the challenges large companies and organizations face with data.

“It’s funny how things work out”

Growing up in Maryland, Grove got his first computer when he was in grade school. His passion for Maryland sports sparked around the same time and he was cheering on the Terps at Maryland basketball games from the time he was 9 years old. When it was time for Grove to start college, UMD was the obvious choice. So was computer science. He already had a plan for the future.

“I wanted to be a game programmer,” Grove recalled. “That was the dream that got me into computers in the first place.”

“I tried to learn programming on my own, but I didn't really make much progress until I started studying computer science in my undergrad work in Turkey,” Sirin recalled. “Things started clicking then and I realized software engineering is not much different from building with Legos. You put small components together and what you build in the end is greater than the sum of its parts. Maybe not surprisingly, my final project in undergrad was building cooperative robots using programmable Lego Mindstorms sets.”

After Grove graduated from Maryland in 2002, he went to work as a research assistant in a lab jointly funded by Fujitsu and UMD. But about a year later, Grove stepped away to finally pursue his boyhood dream: he and a friend started a company and created their first video game. The results were less than spectacular.

“It sold seven copies,” Grove said, laughing. “I got a commission check for $3.52. It was an interesting 18 months. I came out of it destitute, basically living on my eventual wife’s couch.”

But all was not lost. Grove switched gears, remembering a course he took for fun during his senior year at Maryland that turned out to be one of his favorites.

“I only had electives left to fulfill my requirements to graduate,” he explained. “I asked a professor I liked for a fun programming class and he said, ‘There’s this one called extreme programming with Jim Hendler. He’s really smart, you’ll like it.’ As it turned out, it had nothing to do with programming; it was actually about the semantic web.”

Grove was intrigued by the concept—giving machines tools to find and combine information from disparate data sources. It was Hendler who hired Grove to work in the research lab at UMD, and Grove continued working there on and off during his game programming phase to help pay the bills. In 2005, when Grove’s game business flopped, he decided to return to his research roots and get back into what was happening in Hendler’s lab.

“Jim Hendler, my boss, was one of the inventors of the semantic web,” Grove said. “His group at the lab was called MINDSWAP and it was one of the preeminent groups in the United States. I think it was one of the first doing research in this area. It’s funny how things work out.”

During that time, Grove reconnected with Sirin and the two met Clark, a research assistant who was working in the same lab. In 2006 after Sirin earned his doctorate, the three of them formed a consulting company.

“Headquarters was basically the basement of a friend of ours’ house, so we had one table that we put all of our laptops on,” Sirin explained.

“You just need to bring it together”

In those early years, the company’s focus was building ad hoc data solutions for businesses and organizations, many of which were facing the same dilemma: how could they connect mountains of data scattered over countless disconnected data sources to quickly find answers about everything from customer behavior to staffing?

NASA was a good example.

“They were really struggling with how to staff a project. They had people leaving and didn’t know who knew what,” Grove explained. “They’d been trying off-the-shelf solutions and nothing was working. We said, ‘You really have all the data you need to solve this problem, you just can’t put it all together. You already have who worked on what project and the papers that people publish, and you know where they work and their email address. You have all that data; you just need to bring it together.’”

For Grove and his colleagues, that mission—bringing data together—became the focus of their work over the next decade. By 2015, their first product was taking shape, but they still needed a name for the company and the product, or at least a better one.

“We called it Slug originally. And that name was bad enough that we knew we were going to have to come up with something better,” Grove recalled. “It just happened that one of the first times when I actually got one of the early parts of the product working, I was listening to an album by a band called Mother Love Bone, the core of which would go on to become Pearl Jam, and they have a song called Stardog Champion. And I thought, ‘That’s cool.’ Forty-eight hours later, we had a logo and it took on a life of its own.”

“This can really turn into something”

Stardog was designed to simplify the complex data challenges that cost organizations significant time and money.

“We make it easier for them to get access to all of the relevant data for a question they need to answer,” Grove explained.

“When the question—written in a query language, not in English—is sent to Stardog, our platform decomposes it and turns around and queries all the places it knows about that have information relevant to that question,” Grove said. “Users of Stardog are able to get more accurate, complete, timely answers to their questions because they're able to query data directly without having to know the details of where that data is stored, how it's stored, what formats the storage system supports, et cetera.”

Soon after Stardog launched, the product took off.

It’s fun to “hear how we’ve helped them”

In the years since they created their first product, Stardog has grown by leaps and bounds, with nearly 80 employees at last count. Customers—from Cisco and NASA to Siemens and the National Cancer Institute—use Stardog products to support space missions, advance drug discovery and even detect fraud.

“It’s cool,” Grove said. “It’s fun to interact with customers and hear about how we’ve helped them.”

But some things haven’t changed. The company is still as unique as its name and still a reflection of the friends who started it so many years ago.

“It’s never been like a corporate culture, it’s never been that kind of company,” Sirin explained. “I don’t think we ever wore any kind of suit. It was more of a friendship environment for us, working together for so many years in the same room.”

Sirin is still passionate about soccer and now plays strategy games with his own kids. Grove, now a father of two, is still a die-hard Terps fan. Stadium seats from the old Cole Field House have a prominent place in his office and he still follows Maryland sports as much as he can.

As for what’s next for Stardog, they can’t help but be optimistic.

“IPO maybe?” Grove said, laughing. “We’re still I think in the middle of our journey. I wish I knew what was next. Hopefully much more success in the future.”