Eric Krokos ’13, M.S. ’15, Ph.D. ’18 was part of a UMD team that used electroencephalography (EEG) to better understand and work toward solutions for VR-induced discomfort.
July 08, 2021 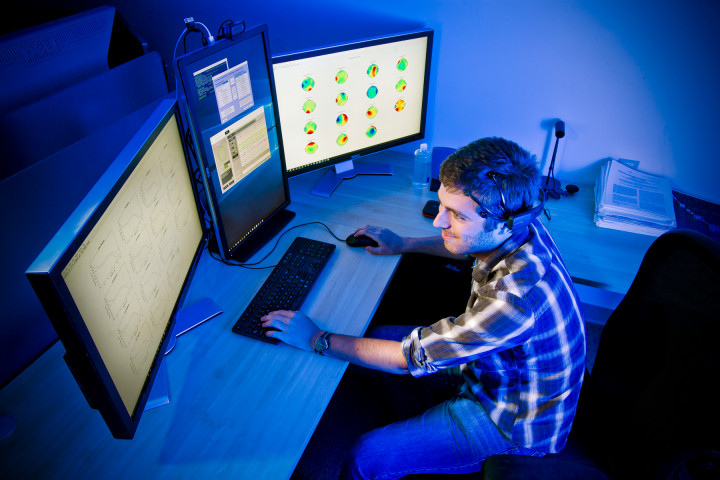 If a virtual world has ever left you feeling nauseous or disorientated, you’re familiar with cybersickness, and you’re hardly alone. The intensity of virtual reality (VR)—whether that’s standing on the edge of a waterfall in Yosemite or engaging in tank combat with your friends—creates a stomach-churning challenge for 30-80% of users.

In a first-of-its kind study, researchers at the University of Maryland recorded VR users’ brain activity using electroencephalography (EEG) to better understand and work toward solutions to prevent cybersickness. The research was conducted by computer science alum Eric Krokos ’13, M.S. ’15, Ph.D. ’18, and Amitabh Varshney, a professor of computer science and dean of the College of Computer, Mathematical, and Natural Sciences.

The term cybersickness derives from motion sickness, but instead of physical movement, it’s the perception of movement in a virtual environment that triggers physical symptoms such as nausea and disorientation. While there are several theories about why it occurs, the lack of a systematic, quantified way of studying cybersickness has hampered progress that could help make VR accessible to a broader population.

Krokos and Varshney are among the first to use EEG—which records brain activity through sensors on the scalp—to measure and quantify cybersickness for VR users. They were able to establish a correlation between the recorded brain activity and self-reported symptoms of their participants. The work provides a new benchmark—helping cognitive psychologists, game developers and physicians as they seek to learn more about cybersickness and how to alleviate it.

“Establishing a strong correlation between cybersickness and EEG-measured brain activity is the first step toward interactively characterizing and mitigating cybersickness, and improving the VR experience for all,” Varshney says.

EEG headsets have been widely used to measure motion sickness, yet prior research on cybersickness has relied on users to accurately recall their symptoms through questionnaires filled out after users have removed their headsets and left the immersive environment.

The UMD researchers say that such methods provide only qualitative data, making it difficult to assess in real time which movements or attributes of the virtual environment are affecting users.

Another complication is that not all people suffer from the same physical symptoms when experiencing cybersickness, and cybersickness may not be the only cause of these symptoms.

Without the existence of a reliable tool to measure and interactively quantify cybersickness, understanding and mitigating it remains a challenge, says Varshney, a leading researcher in immersive technologies and co-director of the Maryland Blended Reality Center.

For the UMD study, participants were fitted with both a VR headset and an EEG recording device, then experienced a minute-long virtual fly-through of a futuristic spaceport. The simulation included quick drops and gyrating turns designed to evoke a moderate degree of cybersickness.

Participants also self-reported their level of discomfort in real time with a joystick. This helped the researchers identify which segments of the fly-through intensified users’ symptoms.

This work was supported by the National Science Foundation, the state of Maryland’s MPower Initiative and the NVIDIA CUDA Center of Excellence program.