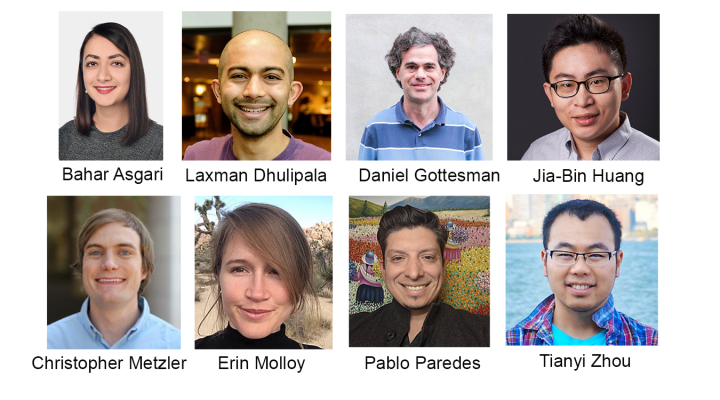 Eight new full-time tenured/tenure-track faculty members—three who began their appointments this year and five more who will start in 2022—have joined the Department of Computer Science with joint appointments in the University of Maryland Institute for Advanced Computer Studies (UMIACS).

“The department is delighted to welcome our new faculty members. Their tremendous amount of knowledge and expertise in critical research areas will provide a huge boost to the educational and research capacity of our department. We are excited to support them in their work,” said Department Chair Matthias Zwicker, who holds the Elizabeth Iribe Chair for Innovation in the Department of Computer Science and the Phillip H. and Catherine C. Horvitz Professorship in Computer Science.

Asgari will join UMD in July 2022 as an assistant professor of computer science. She will spend the next year working at Google.

Asgari’s research interests include but are not limited to efficiently accelerating sparse problems, by enabling stream accesses to memory using hardware/software techniques. She received her doctoral degree in electrical and computer engineering from Georgia Tech in 2021.

Dhulipala will join UMD in July 2022 as an assistant professor of computer science. He is currently a visiting researcher at Google Research NYC, where he is collaborating with researchers in the Graph Mining team to build practical and theoretically efficient parallel clustering algorithms for sparse graph-based data.

Dhulipala’s research revolves around designing high-performance parallel, dynamic and streaming graph processing algorithms and systems, with a focus on both practical and theoretical efficiency. He received his doctoral degree in computer science from Carnegie Mellon University in 2020.

Gottesman is a Fellow of the American Physical Society and was named to the MIT Technology Review's TR100: Top Young Innovators for 2003. He received his doctoral degree in physics from Caltech in 1997.

Huang will join UMD in August 2022 as an associate professor in computer science who will hold a Capital One Professorship. He is currently a visiting research scientist at Facebook Reality Labs.

Huang’s research interests include computer vision, computer graphics and machine learning with a focus on visual analysis and synthesis with physically grounded constraints. He received his doctoral degree in electrical and computer engineering from the University of Illinois, Urbana-Champaign in 2016.

Metzler is an assistant professor of computer science who started at UMD in January. His research develops new systems and algorithms for solving problems in computational imaging, machine learning and wireless communications.

Before coming to UMD, he was an Intelligence Community Postdoctoral Fellow in the Stanford Computational Imaging Lab. Metzler was also an NSF Graduate Research Fellow, a DoD NDSEG Fellow, and a NASA Texas Space Grant Consortium Fellow. He received his doctorate in electrical and computer engineering from Rice University in 2019.

Molloy is an assistant professor of computer science and a member of the Center for Bioinformatics and Computational Biology.

Molloy’s research focuses on designing and implementing phylogeny estimation methods that can effectively utilize distributed-memory systems and that have provable statistical guarantees (e.g., statistical consistency under stochastic models of evolution).

She recently completed a yearlong position as postdoctoral researcher in the Machine Learning and Genomics Lab at the University of California, Los Angeles. Molloy received her doctorate in computer science from the University of Illinois at Urbana-Champaign in 2020.

His research focuses on subtle interventions to reduce stress, such as guiding people to breathe slowly with subtle haptic cues from office or car furniture, and passive sensing of affective and physiological biomarkers derived from existing devices (such as computers, phones, etc.). Paredes earned his doctoral degree in computer science from the University of California, Berkeley, in 2015.

Zhou will join UMD in August 2022 as an assistant professor of computer science. He is currently completing his doctoral degree in computer science (graduating July 2021) at the University of Washington, where he is a member of the Machine Learning, Optimization, & Data Interpretation (MELODI) Lab.

His research interests are in machine learning, optimization and natural language processing.