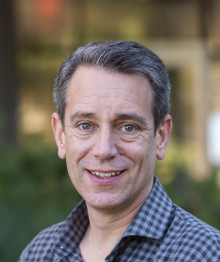 Matthias Zwicker is the Elizabeth Iribe Chair for Innovation and the Phillip H. and Catherine C. Horvitz Professor of Computer Science, and currently serves as the Chair of the Department of Computer Science. He joined UMD in March 2017 as the Reginald Allan Hahne Endowed E-Nnovate Professor in Computer Science. He obtained his PhD from ETH in Zurich, Switzerland, in 2003. From 2003 to 2006 he was a post-doctoral associate with the computer graphics group at the Massachusetts Institute of Technology, and then held a position as an Assistant Professor at the University of California in San Diego from 2006 to 2008. From 2008-2017, he was a professor in Computer Science at the University of Bern, Switzerland, where he served as the head of the Computer Graphics Group and as director of undergraduate and graduate studies. His research focus is on the intersection of artificial intelligence and computer graphics, with the goal of enabling next generation AR/VR and computer graphics applications. He has served as a papers co-chair and conference chair of the IEEE/Eurographics Symposium on Point-Based Graphics, and as a papers co-chair for Eurographics and the Eurographics Symposium on Rendering. He has been a member of program committees for various conferences including ACM SIGGRAPH, ACM SIGGRAPH Asia, and Eurographics, and he has served as an associate editor for journals such as the Computer Graphics Forum, IEEE TVCG, and the Visual Computer. As an active member of the UMD community, he has served as a University Senator for the CS department, as a faculty co-lead in developing the new Immersive Media Design major, and as a faculty mentor in the Gemstone Honors Program.